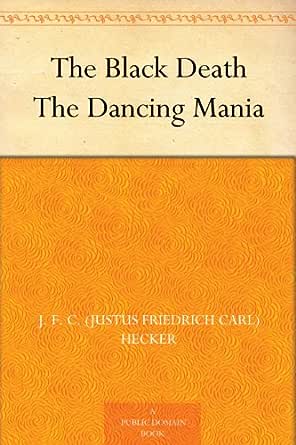 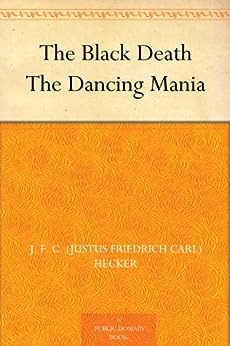 This book is part of the TREDITION CLASSICS series. The creators of this series are united by passion for literature and driven by the intention of making all public domain books available in printed format again - worldwide. At tredition we believe that a great book never goes out of style. Several mostly non-profit literature projects provide content to tredition. To support their good work, tredition donates a portion of the proceeds from each sold copy. As a reader of a TREDITION CLASSICS book, you support our mission to save many of the amazing works of world literature from oblivion.
click to open popover

Andreea
5,0 van 5 sterren About the Black Death and Dancing Mania
20 augustus 2013 - Gepubliceerd op Amazon.com
Geverifieerde aankoop
The book I'm going to review today comprises of two studies — The Black Death and The Dancing Mania — written by the German Professor of Medicine Justus Friederich Karl Hecker, also is considered the father of historical pathology. In these two works published in 1832, the physician analyzes the main characteristics of the two pandemics, the causes which led the way to their spreading, the diseases viewed from the religious perspective, their various forms, the cures or procedures used by famous doctors of the Middle Ages and the way in which these diseases affected the human mind.

Even though Prof. Hecker doesn’t say anything about rats or fleas — which carried the plague from Asia to Europe and Africa — he gives an account of how the plague manifested itself in different countries of the world. Documents show that some people died from respiratory problems while others had blisters and buboes on their skin – located especially in the axilla and in the groin area – or other victims bled through the nose or other anatomical orifices. Through incisions and the opening of the buboes, some patients recovered, but these procedures took place towards the period when the epidemic began to decrease.

From a psychological and religious point of view, people saw the Black Death as a punishment sent from God, in order to make them pay for their sins. Medieval people, especially those from the lower ranks of the feudal system, were strong believers in supernatural phenomena because they were illiterate and poor, living in filth and ignorance. They were rude and their minds were subdued by the Church, which was very powerful. Meanwhile, the kings and noblemen lived in luxury and debauchery without caring too much for their subjects.

Due to the circumstances mentioned above, it is impossible to know the exact number of plague victims, but in the main European cities somewhere around ~10.000 and 100.000 people died. Because of this huge number of deaths, the deceased were randomly buried in large pits or in layers or even thrown into the river – such was the case in Avignon. Hecker writes that some plague victims were buried alive because of the general hysteria regarding the pandemic. Eventually, the pestilence died out and most of the towns and cities were depopulated or some were even abandoned because people had fled after the disease broke out, leaving behind sick children, parents, relatives and friends.

The Dancing Mania appeared in Western Europe and it probably had its roots in the human psyche. It might have been a negative mental response to the Black Death. During convulsions, the victims moved uncontrollably as in a dance, had hallucinations regarding religion, shouted and eventually fell with exhaustion or even dropped dead. People used to gather in public places to see the gruesome scenes and some of the spectators caught the mysterious dancing virus; therefore they joined the group affected by the disease. Priests began to perform exorcisms on the people possessed by the strange illness – known also as St. John’s Dance or St. Vitus's dance – and that proved to be effective. The physician believes that the Dancing Mania might be an ‘ancestor’ of epilepsy, chorea and of hysteria. A particular branch of this unusual mania manifested itself in Italy — spreading from Apulia to the entire country — and it was called Tarantism, the cause of the illness being the bite of a tarantula.

In the last chapter, Professor Hecker reveals other lesser known mental disorders, convulsions and hysterical fits which alarmed people from certain communities during the seventeenth and nineteenth century. The examples the author gives show that women were most affected because: “Now every species of enthusiasm, every strong affection, very violent passion may lead to convulsions — to mental disorders — to a concussion of the nerves, from the sensorium to the very finest extremities of the spinal cord” (Page 127). It sounds a bit like hysteria, doesn't it? Well, I'm not a medical student to tell if Hecker was right or wrong about those mysterious diseases, but we mustn't forget that the affected women usually belonged to the lower class. Who knows how hard and how many hours a day they were working and in what terrible conditions they lived? In this chapter you will also find three awkward manias which resemble St. John's Dance, fanatical sects, such as the Convulsionnaires in France and the Jumpers in Britain, religious ecstasy and the terrifying treatments of the convulsive people.

Heather
5,0 van 5 sterren Good review of the black plague
20 juni 2013 - Gepubliceerd op Amazon.com
Geverifieerde aankoop
Just to give a heads up, this is a reprint of a document from 1888. So for everyone looking for information Yersinia pestis or how it was carried by fleas you will be disappointed. That was discovered later.

Also this was when the miasma theory was falling out and germ theory replaced it. So there does appear to be a bit of both sprinkled in.

With that said this is still a good book. It's major key points is the detail involved with the patients disease, the overall death toll and how it spread across Europe. It also goes into a lot of detail about what happened afterwards. Like how the plague caused the weakening of the catholic church when the fanatics came in and how the Jews were blamed and persecuted for it.

The second part of the book talks about the dancing mania which is really just a continuation of the fallout from the black death. The dancing mania, which caused hoards of people to dance until they died, starts right after the black death is over and continues up until the late 1700s. He goes into a lot of description of the behavior of those stricken with it and how it was most likely a psychosis from all the mental anguish mixed with superstition.

I recommend it to anyone interested in Europe during this time period.
Meer lezen
15 mensen vonden dit nuttig
Vertaal recensie in het Nederlands

Randi A Samuelson-Brown
3,0 van 5 sterren 1833 Publication - interesting for that fact alone
19 oktober 2016 - Gepubliceerd op Amazon.com
Geverifieerde aankoop
This book was published in 1833, and was written by a German physician. Split into two parts - the first part is the Black Death, and the second part is the Dancing Mania (which I still don't entirely understand). Nevertheless, It is interesting how the topics were viewed nearly two hundred years ago. I found it rather dry and a bit repetitive, but worth a look. More current books are easier to make sense of, however.
Meer lezen
2 mensen vonden dit nuttig
Vertaal recensie in het Nederlands

Chuck Roberts
5,0 van 5 sterren Edited OCRd text was pretty good.
9 januari 2016 - Gepubliceerd op Amazon.com
Geverifieerde aankoop
Well done book. Unlike most public domain books that are just scanned pages of PDFs plopped into an Ebook, or OCRd text with tons of errors, this book has been edited by a human and I didn't find any errors on the first few pages. This looks like it was done through www.pgdp.net, the distributed proofreading arm of Project Gutenberg.
Meer lezen
Vertaal recensie in het Nederlands