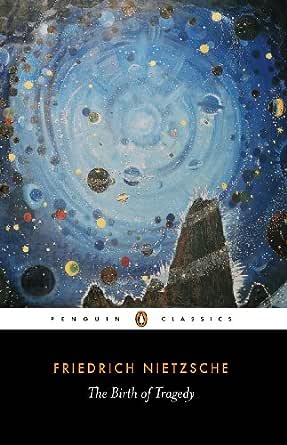 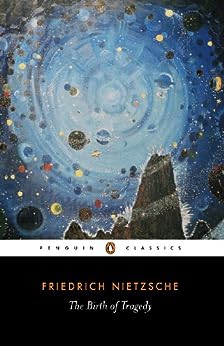 The Birth of Tragedy: Out of the Spirit of Music (Penguin Classics) (English Edition) Kindle-editie

A compelling argument for the necessity for art in life, Nietzsche's first book is fuelled by his enthusiasms for Greek tragedy, for the philosophy of Schopenhauer and for the music of Wagner, to whom this work was dedicated. Nietzsche outlined a distinction between its two central forces: the Apolline, representing beauty and order, and the Dionysiac, a primal or ecstatic reaction to the sublime. He believed the combination of these states produced the highest forms of music and tragic drama, which not only reveal the truth about suffering in life, but also provide a consolation for it. Impassioned and exhilarating in its conviction, The Birth of Tragedy has become a key text in European culture and in literary criticism.
click to open popover

K.S.Ziegler
5,0 van 5 sterren Tragedy and its relation to Myth and Music
6 oktober 2013 - Gepubliceerd op Amazon.com
Geverifieerde aankoop
How did it happen that during the ascendency of Greek civilization - the very foundation of Western civilization as we know it - a dramatic art form expressing the most terrible tragedies was entertained? And how was it that during the pinnacle of that culture this tragic art form declined and its elements went underground? The author is not inclined to gloss over the essential tragedy inherent in human existence. The destruction of the individual is inevitable, and all individuation eventually causes suffering. He proceeds through the mythic context (the mythic context being essential to the Greek world view) of the gods Apollo and Dionysius. Apollo includes dream imagery, illusion, or anything that involves form; on the other hand, Dionysius includes intoxication, ecstasy, primal oneness, and the energy of music. They may be conceived as distinct and opposing, but it's their complementary state that spells balance and substance in art.

Nietzsche states, "The same impulse that is symbolized in Apollo gave birth to the entire Olympian world." The Olympians consisted of a pantheon of twelve gods and goddesses who had wrested control from the Titans, an older pantheon that represented the barbarism of Nature. Apollo was a mainstay of the Olympians, but Dionysius grew out of a cult religion and was only added later. Nietzsche states that the Greeks, being quite aware of the horrors of existence, felt compelled "to interpose the radiant dream-birth of the Olympians between themselves and these horrors". From that "radiant dream-birth" grew the myths. The book does not go into extensive detail about the myths featured in the tragedies, not like a scholarly work would; but a very important myth that it does touch on is the Prometheus myth of stealing fire from the gods. Stealing fire was like stealing power and control, and represented a defiance of divinity.

Not much can be gleaned of Greek music, but we do know that the dramatic dithyramb (the word is derived from the Greek), sung and danced by a chorus in honor of Dionysius, was a basis of what became Attic tragedy. It was the music that made the tragedy bearable and elevated it; and it was the music that rose out of tragedy in the spirit of Dionysius. The author links the decline of tragedy to what he sees as an over-reliance on reason and logic, which he pins squarely on Socrates. This over-reliance brings about an optimism that cannot be justified in life and therefore rings hollow in all art forms; and is not fertile ground for tragic dramatic art.

The arguments very much tend toward the polemical, most notably in the linking of Socrates and Euripides with the decline of Greek tragedy. Here, Nietzsche tends to think about the overreach of reason and logic during the nineteenth century rather than the tremendous achievement and significance of Greek thinkers such as Socrates during ancient times. Some sections of the book are particularly speculative such as his musings on lyric poetry and the rebirth of tragedy. He, himself, in his self-criticism of this book disparaged his youthful enthusiasm, especially in regard for Richard Wagner's music. But despite the criticism of this book, it's insights, especially concerning myth, art and tragedy, make it definitely worth reading more than once.

Cole
4,0 van 5 sterren Little sloppy
30 december 2019 - Gepubliceerd op Amazon.com
Geverifieerde aankoop
As someone who speaks no German and has no experience with the original text, I’ll say the translation was fantastic. Healthy amount of typos though. And read Schopenhauer first, or this convoluted essay will seem impossibly so.
Meer lezen
Vertaal recensie in het Nederlands

Timothy
5,0 van 5 sterren The Birth of Tragedy
16 mei 2019 - Gepubliceerd op Amazon.com
Geverifieerde aankoop
This book does what I love most about philosophy, which is to notice and describe the magic in life. Although I don’t agree with all of the ideas in the book, it has had a profound impact on my existence and has made me feel connected to this world.
Meer lezen
Vertaal recensie in het Nederlands

Roberto Rigolin F Lopes
5,0 van 5 sterren Wonder ignites action
28 april 2018 - Gepubliceerd op Amazon.com
Geverifieerde aankoop
We are in 1871, have a good look around. There are people defending that life should be "serious"; no novels, no theater, no music… But here comes Nietzsche with a counterargument! He warms up assuming that you know a great deal about Greek tragedy. And goes around asking: Why humans need art? Well, ordinary lives are full of drama but the variation between tragedy and triumph is not in the same magnitude as in mythology. In his own words: "Tragedy forces us to look at the terrors of individual existence, yet we are not to be petrified with fear". And the pleasant side is a supreme gratification from nature. Thus art sets the bounds for WONDER, so humans are set for ACTION. Once in motion, humans are no longer artists but a work of art.
Meer lezen
7 mensen vonden dit nuttig
Vertaal recensie in het Nederlands
Ga naar Amazon.com om alle 26 recensies te bekijken 4,2 van 5 sterren
Terug naar boven
Over ons
Verkoop bij ons
We helpen je graag
© 1996-2020, Amazon.com, Inc. en dochterondernemingen