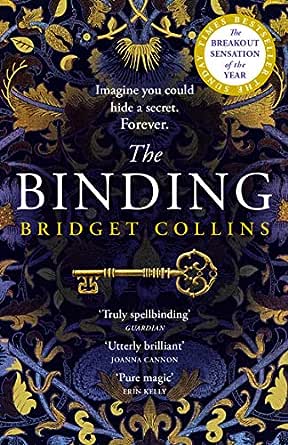 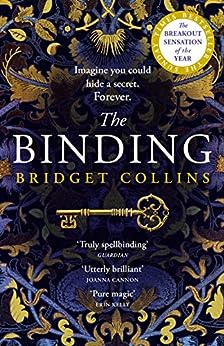 THE BREAKOUT SENSATION OF THE YEAR

Emmett Farmer is working in the fields when a letter arrives summoning him to begin an apprenticeship. He will work for a Bookbinder, a vocation that arouses fear, superstition and prejudice – but one neither he nor his parents can afford to refuse.

In a vault under his mentor’s workshop, row upon row of books – and memories – are meticulously stored and recorded.

Then one day Emmett makes an astonishing discovery: one of them has his name on it.

THE BINDING is an unforgettable, magical novel: a boundary-defying love story and a unique literary event.

M. Gondek
3,0 van 5 sterren Not what the cover claims
25 februari 2019 - Gepubliceerd op Amazon.com
Vine-klantenrecensie van gratis product( Wat is dit? )
This is a tough review to write for two reason: 1) This is really two books - the one promised by the cover and the first 159 pages, and the one that's the other 277 pages; 2) I'm afraid my criticisms won't make much sense without spoiler-like specifics. In case you want to read the book for its last 277 pages, though, I'll try to keep this review spoiler-free, and indicate possible spoilers as I go.

1. The setting has compelling elements. There's nothing ground-breaking here, and anyone who's read any kind of fantasy since childhood will recognize pre-Industrial Revolution, rural England with one fantasy twist. It's got naughty nobles, virtuous peasants, a "witch" in the marshes, and even horses that are *actually* called Shire horses. Stray dragons, wizards, and even Hobbits from neighboring books would be right at home if they wandered in. But I'm all for these grand old chestnuts if the characters are compelling and the story is gripping (that's sort of the case here). Either way, the bookbinding twist introduces enough mystery and intrigue to make up for the tropes. Mostly.

2. Characters don't develop. At all. No moral relativism here! Villains are truly villains, heroes are truly heroes, and everyone slots neatly into their cast roll from start to finish. I didn't mind this at all, since I happen to like straightforward character types in service to a good story. The problem for me is that ***possible spoiler*** the characters are the exact same on the last page as they are on the first, and the story isn't enough to make up for it. For example, one of the main protagonists has multiple opportunities to stand up to his demons and evolve, but never, ever, ever does. The book ends with an unsatisfying splat because he's basically the same weak-willed, defeated victim (but with love in his life!) that he's always been, and he shows no signs of growing out of it. Kind of makes you wonder how great a long-term relationship they'll have, if one of them insists on self-hating forever. **end spoiler** Sure, the binding ritual has side-effects (like propelling the whole storyline), but it's a deus ex machina device to excuse 400+ pages of text, rather than a catalyst for character development (or even theme development). So the characters end up being flat stereotypes without depth or complexity, in service to an equally flat story.

3. It's not a fantasy novel. Sure, it's set in a fantasy world with a mystical twist. But this is a story about ***possible spoiler*** forbidden love, and as such, is purely a romance novel. **end spoiler** The publishers did the author a real disservice with the cover, pretending the book explores "hid[ing] a secret. Forever." But since the author actually seems to want to write about that in the first 159 pages, I can't really blame the publishers. The problem is that the book completely changes gear on page 160, and all the promise, mystery, and fascination of pages 1-159 evaporate. The first part holds so many alluring details that I caught myself thinking several times, "Oh, I can't wait to see how the author develops this idea" - only to realize around page 200 that not a single one of those ideas would ever rear its head again. Every single fascinating fantasy detail ends up sacrificed to the overly-complicated, overwrought (and frankly tedious) ***spoiler*** romance story, and new, intriguing ideas that emerge later in the book live similarly truncated lives. Nothing matters in this book but the romance. Nothing. **end spoiler**

4. ***maybe a spoiler*** The ending gets absurd. You know when you watch a movie, and the directors spend so much time on dialogue and meaningful glances between characters that you get thrown out of the story? You may actually catch yourself saying to the screen, "Sure, it's a GREAT IDEA to have a heartfelt, deep discussion about your feelings right now. Let the house burn down around you. Your dialogue and soulful expressions are SO MUCH more compelling." Yeah, that's this book. I usually make myself attentively read any book I agree to review because that only seems fair, but I caught myself skimming a LOT of the last couple of chapters. Okay, also some of the middle chapters. The resolution was so obvious and the path so tortured, I really, really, really just wanted to get it over with. **end spoiler**

5. That said, the prose has some real high points. Dialogue flows gracefully, descriptions wax lyrical, and the world-building feels immersive. All this combines to suck you in very effectively, and promises really satisfying, thought-provoking material. And so many meaty tidbits ask for exploration, from the Cursing powers of a Binder, and the mystical connection between Binders and books, to the social-impact of power used for personal gain, and how individuals can confront systemic injustice even though they're part of the problem. That's much of what made the book so disappointing for me, since I wanted to see the author's undeniable writing skills applied to the promises suggested in Part 1. Nope. So just enjoy the prose and move on.

Because of all this, I have strong reservations about recommending this book. READ THIS if you want a romance novel about **spoiler** forbidden love, and have an open mind about what love can look like. **end spoiler** In that case, ignore all the fantasy stuff and just enjoy the fully-explored emotions. DON'T READ THIS if you want a compelling fantasy story that explores either fascinating special powers, questions about how we handle memory and grief, implications of memory erasure, or pretty much anything but romance, romance, romance. Also, romance.
Meer lezen
93 mensen vonden dit nuttig
Vertaal recensie in het Nederlands

Jill Jones
1,0 van 5 sterren Not what you think it will be like
5 augustus 2019 - Gepubliceerd op Amazon.com
Geverifieerde aankoop
I really wanted to like this book. It starts off great with mystery and magic. You want to read more and more and totally get into the their whole world and the BOOM completes shuts down bc out of the blue - the author starts going into deep detail about the happenings of gay lovers.
I wanted a magical spell-binding concept of what the man can do with memories not a graphic love story. Too many tales in this book. Maybe should have been two books. And my kids can’t read it and she. Was so excited that it might have been like a new Harry Potter thing. Nope. Screwed that up royally.
Meer lezen
11 mensen vonden dit nuttig
Vertaal recensie in het Nederlands

While I did enjoy this story, I was confused as to the direction it was going. The premise of binding was super fascinating, but I felt like it didn't take up enough of the plot by the end. Besides people chasing their bound books. I would've liked to see more of Emmett as a professional binder/apprentice, since he struggled with his apprenticeship so much in the beginning.

I did really like the relationship that was portrayed in this book. I loved how it was presented to us. There was such great build up and I was hoping for it to happen. A really great slow burn this is. It was slightly disorienting that the POV switches halfway through. I kept thinking the second narrator was Emmett, but then he'd look at Emmett and I was thoroughly confused for a couple minutes.
Meer lezen
7 mensen vonden dit nuttig
Vertaal recensie in het Nederlands

Beautifully written and utterly romantic. The Binding is incredible. Read it. Stop what you're doing and read it now.
Meer lezen
9 mensen vonden dit nuttig
Vertaal recensie in het Nederlands