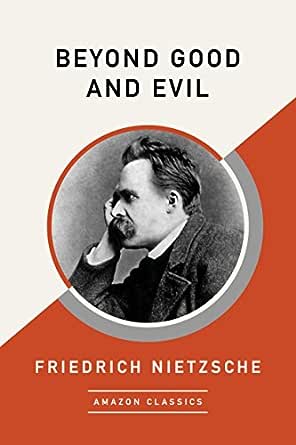 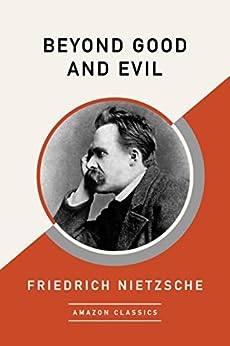 A caustic criticism of nearly every philosophic predecessor and a challenge of traditionally held views on right and wrong, Friedrich Nietzsche’s Beyond Good and Evil paved the way for modern philosophical thought. Through nearly three hundred transformative aphorisms, Nietzsche presents a worldview in which neither truth nor morality are absolutes, and where good and evil are not opposites but counterparts that stem from the same desires.

Beyond Good and Evil was a foundational text for early twentieth-century thinkers, including philosophers, psychologists, novelists, and playwrights. Today’s readers will delight in Nietzsche’s pithy wit and irony while gaining a deeper understanding of his core ideology.

AmazonClassics brings you timeless works from iconic authors. Ideal for anyone who wants to read a great work for the first time or revisit an old favorite, these new editions open the door to the stories and ideas that have shaped our world.

Additionally, the two versions I refer to use ALL CAPS instead of italics. Nietzsche loves his italics, especially in BGE. It's like he's screaming every other sentence.

Jeremy David Stevens
5,0 van 5 sterren Whoever reaches his ideal transcends 'eo ipso.'
19 juli 2018 - Gepubliceerd op Amazon.com
Geverifieerde aankoop
This is the third book I've read of Nietzsche's. The first was a collection from various writings, and the second was "The Anti-Christ." Beyond Good and Evil was Nietzsche's attempt to summarize his entire philosophy into one book. I don't know if I'd ever call anything Nietzsche wrote a summary, but this book does lay out his principles in black-and-white, and it did help me put some of the pieces together.

Below are a few of my takeaways. It's not a summary, because I don't even know if that's possible. So I just wanted to share a few things I've picked up on.

On the will to power:

If modern (nineteenth century) man is no longer going to believe in God, or at least if they're going to tone down His influence a bit, the next logical step for them was the concept of free will. In a post-enlightenment world, people were trying to understand if there really is a God pulling our strings like puppets. If they weren't going to believe that, the next logical step was free will. Nietzsche rejects free will and instead believes in the will to power. Essentially the will to power is his phrase that means people should aim to take power over themselves and create a "superman" or "overman" out of themselves. Nietzsche sees this as an alternative to the concept of free will.

Another thing that I noticed about Nietzsche after reading a fair bit of his work is that, as critical as he is of Christianity, he seems to have a bit of an affinity for Buddhism, or at least the principles of Buddhism. Buddhism's primary concept is "life is suffering," right? Nietzsche writes extensively about suffering as well, arguing in part that the cause of all great human advancement is suffering. In the Anti-Christ, he often points out that Buddhism is better than Christianity. To be fair, there was a pretty short list of things that weren't better than Christianity, according to Nietzsche.

"Blessed be the forgetful: for they forget their stupidities, too."

"'Where the tree of knowledge stands, there is always Paradise': thus speak the oldest and the youngest serpents."

Kindle Customer
1,0 van 5 sterren Illegible
8 maart 2018 - Gepubliceerd op Amazon.com
Geverifieerde aankoop
This ebook is illegible. Someone just did an OCR scan of an existing translation, without fixing any of the problems. About once a sentence, two or more words are crammed together likethis.
Meer lezen
25 mensen vonden dit nuttig
Vertaal recensie in het Nederlands

H
2,0 van 5 sterren Not Satisfied
16 mei 2018 - Gepubliceerd op Amazon.com
Geverifieerde aankoop
The written material in this book is acceptable but the book itself, that being the page is not upon opening the book I discovered this. The first three pages had the top right-hand corner are bent to an angle as to where they are not attached to the binding and thus make an indent into the cover of the book which ruins the pristine and beautiful image on the cover with a bulge that is clearly visible. I request a refund or at the very least new copy of this book that is free of misprints.
Meer lezen