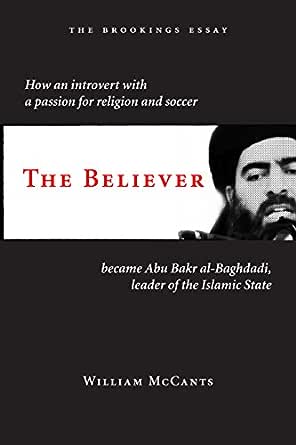 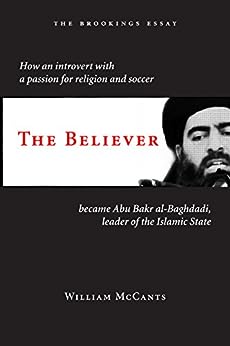 The Believer: How an Introvert with a Passion for Religion and Soccer Became Abu Bakr al-Baghdadi, Leader of the Islamic State (English Edition) Kindle-editie

In The Believer, Will McCants tells the story of Abu Bakr al-Baghdadi, the leader of the Islamic State (a.k.a. ISIS), a group so brutal and hardline that even al-Qaida deemed them too extreme. Baghdadi, an introverted religious scholar, with a passion for soccer, now controls large swaths of land in Iraq and Syria. McCants shows how Baghdadi became radicalized in the Saddam Hussein era and found his path to power after connecting with other radicals in an American prison during the Iraq War, culminating in his declaration of a reborn Islamic empire bent on world conquest.
click to open popover

Kirsten
5,0 van 5 sterren Excellent Book
18 september 2017 - Gepubliceerd op Amazon.com
Geverifieerde aankoop
I ordered this book out of my curiosity of the most wanted and mysterious men in history who had the power to influence hundreds of thousands, if not millions of jihadists under his ruthless reign. His subtle upbringing and interest in religion had enabled him to eventually lead the world's most violent terrorists groups, which I found very interesting. The author left no stone unturned and I was pleasantly surprised by the amount of detail and information that was produced.
Meer lezen
2 mensen vonden dit nuttig
Vertaal recensie in het Nederlands

DM
3,0 van 5 sterren Short Bio of Baghdadi
1 februari 2020 - Gepubliceerd op Amazon.com
Geverifieerde aankoop
Very short book. Biography about background of this dead leader involved in Alqueda and Islamic Brotherhood,. Baghdadi attempted to return to the harsh and punishing laws of Islam claiming his family were descendents of the Prophet Muhammad. Like his predecessors utilizing murder as a way to get rid of all his competition. Did not appreciate his comparison of Bush to Baghdadi. There is no comparison.
Meer lezen
Vertaal recensie in het Nederlands

Rich Kolivoski
3,0 van 5 sterren A good primer on understanding ISIS
3 december 2015 - Gepubliceerd op Amazon.com
Geverifieerde aankoop
This is a good introduction to the leader of ISIS. It is written in conversational English. It will take you very little time to read. When you are finished you will have a grasp of who Abu Bakr Al Baghdadi is and how ISIS came to be. You will know the difference between Al qeada and ISIS and why it matters.

This is not a scholarly work. If you want a deep understanding of Islam or terrorism, this book will leave you hungry. There are better works to read on the subject. None, however, can educate as clearly and concisely as this one.

B. Bauer
4,0 van 5 sterren Rise of Power
12 juni 2017 - Gepubliceerd op Amazon.com
Geverifieerde aankoop
This 21 page booklet (to me) is similar to what one could call the "Abu Bakr al Baghdadi Cliff Notes." There are many ways to narrate of Baghdadi, but this version gives a very good, rounded rise within the ranks.

The dedication, not to mention evil within this man tells me he will be around for some time to come!
Meer lezen
Een iemand vond dit nuttig
Vertaal recensie in het Nederlands

Drift in Progress
4,0 van 5 sterren A clearly-written snapshot
5 januari 2017 - Gepubliceerd op Amazon.com
Geverifieerde aankoop
This was a very quick and to-the-point biography of Abu Bakr Al Baghdadi. I found that the author mostly stayed objective on his radicalization and background, but I have it four stars for the times where that objectivity drifted from biography to personal political shadings. Overall, this was an excellent piece for me to catch up on the history of this man and his rise to power.
Meer lezen
Vertaal recensie in het Nederlands
Ga naar Amazon.com om alle 23 recensies te bekijken 4,2 van 5 sterren
Terug naar boven
Over ons
Verkoop bij ons
We helpen je graag
© 1996-2020, Amazon.com, Inc. en dochterondernemingen