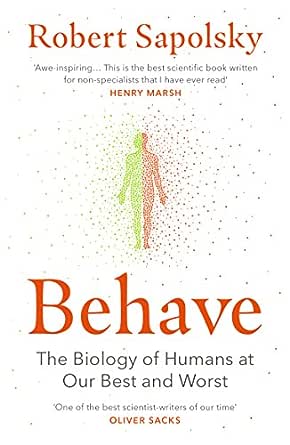 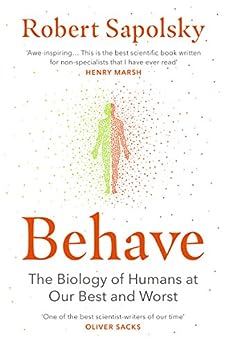 Behave: The Biology of Humans at Our Best and Worst (English Edition) Kindle-editie

Why do human beings behave as they do?

'Awe-inspiring… You will learn more about human nature than in any other book I can think of' Henry Marsh, bestselling author of Do No Harm

We are capable of savage acts of violence but also spectacular feats of kindness: is one side of our nature destined to win out over the other?

Every act of human behaviour has multiple layers of causation, spiralling back seconds, minutes, hours, days, months, years, even centuries, right back to the dawn of time and the origins of our species.

In the epic sweep of history, how does our biology affect the arc of war and peace, justice and persecution? How have our brains evolved alongside our cultures?

This is the exhilarating story of human morality and the science underpinning the biggest question of all: what makes us human?

'One of the best scientist-writers of our time' Oliver Sacks

R. Rex Parris
5,0 van 5 sterren I know how, this book explains why.
6 mei 2017 - Gepubliceerd op Amazon.com
Geverifieerde aankoop
There are many excellent works that explain how we make the decisions we make. Sapolsky tells us why we make them. This book is a must read for anyone interested in why we make decisions that often times seem inexplicable. More importantly, it provides a foundation for changing our social systems in ways that will be far more efficient and productive. I didn't get through the introduction before my first aha moment. He has taken complex science and presented it so it is understandable and enjoyable to read. The downside of reading Sapolsky's latest work is it will cause you to question long held beliefs about guilt or innocence, good and evil, moral or immoral. It is a ride worth taking and will leave you wanting more.
Meer lezen
370 mensen vonden dit nuttig
Vertaal recensie in het Nederlands

CLN Constant Reader
5,0 van 5 sterren Cutting Edge, Newest Science, Readable by us Average People
3 juni 2017 - Gepubliceerd op Amazon.com
Geverifieerde aankoop
The newest on brain science by the world wide expert, Robert Sapolsky. After watching a class taught by him on Great Courses, my husband and I felt he was a leading expert in his field. He also can hold an audience, keeping you interested by inserting anecdotes into what can sometimes be an overwhelming amount of scientific information. In this book, you will learn how much your "subconscious" runs your life. You will see that sometimes why you did something is caused by a butterfly effect that started months ago. You will have a much greater understanding of people and why they do what they do. So worth reading. Amazing achievement, this book, this author, deserves your attention. He's on the cutting edge of our growing base of brain science.
Meer lezen
119 mensen vonden dit nuttig
Vertaal recensie in het Nederlands

Odysseus at home
5,0 van 5 sterren Simply one of the best I've read ever
22 oktober 2017 - Gepubliceerd op Amazon.com
Geverifieerde aankoop
It took me twelve days to read this book. I'm a Chilean reader so my English is no native and it's hard for me to understand everything, but this book deserved to retry any time I couldn't catch the entire meaning of a sentence or an idea. Robert Sapolsky writes as a lecturer. The reader is seated in the classroom and he's the professor who talks, so you feel very comfortable listening him and, more than that, you feel welcome by him. He's so natural and informal that you feel that a distance has been abolished, and this is just what is needed to capture the very essence of this tremendous achievement.

The book is about "us" and "them," and how our biology has modeled us to to replicate and to live this duality as an inexorable destiny. That's the reason why Sapolsky in a very smart design of the book dedicates the thirteen first (out of seventeen) chapters in describing to you how does our brains (and by extension our biology) to produce a human being with all that it means. And it means a lot. More than I can say here. Thus, the first thirteen chapters of the book leave you with the sensation that we are all design to be just the way we are. So nothing to be much optimistic here.

There's (for me at least) a tipping point in the book that synthesizes everything. It is in page 448 and shows you a graph that plots the "proportion of rulings in favor of the prisoners by ordinal position [i.e., the order in which they were heard by the judge]," with "points [indicating] the first decision in each of the three decisions sessions." Well, the thing is that "in a study of more than 1,100 judicial rulings, prisoners were granted parole at about a 60 percent rate when judges had recently eaten, and at essentially a 0 percent rate just before judges ate... Justice may be blind, but she's sure sensitive to her stomach gurgling."

Well, there you are. And this is just one example, there are dozens before and after indicating how sensible we are to the environment, the internal and the external one, something that Sapolsky summarize at the end of the book: "...we haven't evolved to be "selfish" or "altruistic" or anything else--we've evolved to be particular ways in particular settings. Context, context, context."

As long as you read you think that the book was written to let you know how remarkably open AND close is our nature, in such a way that we are condemned to suffer our tremendous limitations: there is no way out (or in). Yes, as Sapolsky says, it's complicated. In fact, that could have been the title of the book. But that would have lessened the final chapters which are like the cracks in the wall through which a silver lining filters. The thing is that you didn't expect what Sapolsky tells you there.

This is not a detectives novel so what's the point in not commenting what's there for everyone of us? Well, I guess that the point is I shouldn't deprive you of discovering by yourself as I did. Yes, I'm talking here of the pleasure that renders the experience of something that sounds (even in a scientific manner) like a revelation. And that is: at the end of the book you see...

I'm sure that other reviewers have revealed everything in order to criticize some points here and there. I guess that could be several, but to me that's not the point. The point is that Behave has not been written to convince you, not at all. Behave has been written to show you. Behave is not a book is a window as I suppose any great book is.

As I said, I'm Chilean and here, in my country, are hundreds of political prisoners that haven't the minimal chance of being paroled. Not even that light ray that could traverse a crack in a wall. Not even that. They have no chance. Unfortunately this book is not going to be translated to Spanish. And if it is, it's not going to arrive to our commercial and poor (intellectually speaking) bookstores. My country is a very quiet one compared with the rest of the world. Nobody even notice it, so quiet it is. We are like Switzerland bur without the money. And with the political prisoners they don't have.

Sapolsky it's not going to change nothing, but that's not the point, I insist: the point is that things are going to change anyway because history tells so. The thing is that we could do something to hurry the future. I don't know how. Sapolsky either. And what about you?

And it feels good.

Kindle Customer
4,0 van 5 sterren Should be titled "Depends"
15 mei 2017 - Gepubliceerd op Amazon.com
Geverifieerde aankoop
This book describes the neurological processes of the brain. Most interesting was the numerous times that one's brain chemistry is doing something other than what you think you are thinking. For example you know that you are not prejudiced against the "other" but your brain knows better.

For me a difficult read. Lots of unfamiliar terms and territory. The wonderful jokes and anecdotes greatly lightened the load. Their inclusion in uber-small type was a disappointment.

The basic message is "it depends." Nature , nurture, early childhood experience (including abuse), and peer pressure all have an impact on behavior. There is no "silver bullet" that explains individual behavior.

This is a scholarly work. The pop culture rewrite probably would run 200 pages without the plumbing and wiring diagrams. The frequent recaps and summaries help keep on on track.