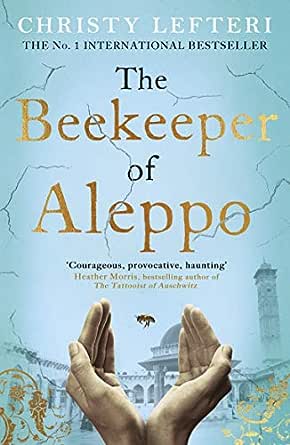 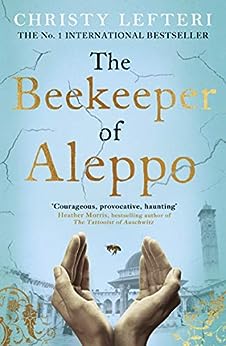 "[Christy] Lefteri sensitively charts what it's like when war comes home, alert to the subtle effects of trauma and grief. Nuri and Afra are not broadly sketched as victims, but rather suffer in different and complex ways from PTSD. . . . By creating characters with such rich, complex inner lives, Lefteri shows that in order to stretch compassion to millions of people, it helps to begin with one."--Time "Beekeeper Nuri and his wife, Afra, are devastated by the Syrian civil war. After violence claims their child and Afra's eyesight, the couple is forced to flee Aleppo and make the fraught journey to Britain--and an uncertain future."--USA Today (5 Books Not to Miss) "In recounting the daily brutality as well as the glimmers of beauty, this novel humanizes the terrifying refugee stories we read about in the news. Lefteri explores questions of trust and portrays what trauma and loss can do to individuals and their relationships. . . . A beautiful rumination on seeing what is right in front of us--both the negative and the positive."--The Boston Globe (Pick of the Week) "Nuri's story rings with authenticity, from the vast, impersonal cruelties of war to the tiny kindnesses that help people survive it. . . . A well-crafted structure and a troubled but engaging narrator power this moving story of Syrian refugees."--Kirkus Reviews (starred review)

"A haunting and resonant story of Syrian war refugees undertaking a treacherous journey . . . Readers will find this deeply affecting for both its psychological intensity and emotional acuity."--Publishers Weekly "Great for book club...a powerful story about the refugee experience, hope, and love."--Real Simple "In fluid, forthright language, Lefteri brings us humbly closer to the refugee experience as beekeeper Nuri and his wife, an artist named Afra who has gone blind form the horrors she's witnessed, escape Aleppo and travel dangerously to Great Britain. . . . There's no overloading the deck with drama; this story tells itself, absorbingly and heartrendingly." --Library Journal

'This is a novel of international significance. Courageous, provocative, haunting, it will open our eyes' Heather Morris, author of The Tattooist of Auschwitz

The Beekeeper of Aleppo

What will you find from his story?

Nuri is a beekeeper; his wife, Afra, an artist. They live a simple life, rich in family and friends, in the beautiful Syrian city of Aleppo - until the unthinkable happens. When all they care for is destroyed by war, they are forced to escape.

As Nuri and Afra travel through a broken world, they must confront not only the pain of their own unspeakable loss, but dangers that would overwhelm the bravest of souls. Above all - and perhaps this is the hardest thing they face - they must journey to find each other again.

Moving, powerful, compassionate and beautifully written, The Beekeeper of Aleppo is a testament to the triumph of the human spirit. Told with deceptive simplicity, it is the kind of book that reminds us of the power of storytelling.

'This book dips below the deafening headlines, and tells a true story with subtlety and power' Esther Freud

Serenity...
5,0 van 5 sterren ~~Powerful/Evocative/Poignant~~
27 augustus 2019 - Gepubliceerd op Amazon.com
Geverifieerde aankoop
The readers of this novel will remember seeing clips on TV and reading articles about the Syrian war that lasted for 6 years. And, we will not forget the pictures of the younger children looking starved and scared in the bombed out buildings in Aleppo and surrounding areas. What we didn't see or hear is the stories of how the families were able to escape the horrors of that country.

This novel tells of one such family, Nuri and his wife, Afra Ibrahim who were residents of Aleppo. The beekeeper, Nuri and his hives in the countryside are described perfectly. And, it is the description of the birds singing at sunrise and then the bees that drew me into this novel early on. One quote near the beginning of the book which I loved "The bees were an ideal society, a small paradise among chaos.".. And, so the journey from Aleppo begins for this family.

Such a powerful and poignant novel that it is at times breath taking. It is as though I was along for the duration of their journey trying to reach Mustafa, Nuri's cousin and family in England. It is evocative in that life and love are explored at their best and worst times.

A quote that is a saying in Syria that I felt contributed to this novel: "Inside the person you know, there is a person you do not know.' The reader will come to realize that both Afra and Nuri have some hidden 'secrets'. And, I would be remiss if I did not mention the one from the Qur'an: Forgive others and Allah will forgive you'.

Just an incredible read for me and one which I will not soon forget. One other thing is the author's notes at the end of her novel. They offer the reader a glimpse into her UNICEF volunteer work in the years 2016 and 2017.

Maryanne Knight
5,0 van 5 sterren A gripping read
24 juli 2019 - Gepubliceerd op Amazon.com
Geverifieerde aankoop
I love the way the story was told, switching from the present struggles to the not so distant past of horror. So although the story is desperately sad, you are still filled with hope because you know the present and that's where the characters actually are.
I would highly recommend this book
Meer lezen
37 mensen vonden dit nuttig
Vertaal recensie in het Nederlands

Sherene
4,0 van 5 sterren A Must read for all
28 juni 2019 - Gepubliceerd op Amazon.com
Geverifieerde aankoop
Prejudice against refugees examined in a heartwrenching story, the strength & vulnerability of the human soul. To think that this situation is happening now in 2019 is heartbreaking, we are a cruel species us humans.
Meer lezen
28 mensen vonden dit nuttig
Vertaal recensie in het Nederlands

Let me start off by saying that this is a book everyone needs to read, especially given the current environment we live in with the immigration issue at the forefront of topics recently here in the Western part of the world. Though I have read plenty of books over the years about the immigrant experience from different viewpoints, including from the refugee and asylum perspectives, few of those books have been as haunting and affecting as this one. The story of Nuri and Afra and their harrowing journey to escape the conflict in Syria, the tremendous losses they endure one right after the other -- the loss of their home, their livelihoods, their family, their precious child, even their own souls – ordinary citizens caught up in horrible circumstances not of their making, already having to suffer through so much loss and devastation, yet somehow still finding the will to live, to push ahead through the grief and the desperation and finally arrive at their destination, only to face an uncertain future. This is one of those stories that reminded me once again just how much we often take for granted as we go about our daily lives and how we should be so much more grateful than we usually are for everything we do have.

This was a heart-wrenching, emotional read that brought tears to my eyes more than once, yet it was also thought-provoking and relevant to so much of what is going on in the world today. I will admit that it did take me a little while to get used to the book’s unique format (with the last word of each chapter acting as the bridge that starts the flashback to the past in the next chapter), but the beautifully written story as well as the realistically rendered characters (all of whom I adored) more than made up for my brief struggle with the format. Nuri and Afra are characters that I know will stay with me for a long time to come, as the penetrating sadness around their story is one that is difficult to forget. With that said though, there were also moments of hope amidst the desperation, such as when Nuri and Afra finally make it to their destination (not a spoiler, since we are already told this from the very first page) and are met with much kindness from the people they end up staying with at the refugee center as they wait for their asylum applications to be processed. These interactions at the refugee center in present time brought a certain element of hope to the story, which helped to balance out the overwhelming sadness of the past narrative recounting Nuri and Afra’s harrowing journey – at the same time, it made their story all the more poignant and powerful.

Part of what made this story feel so realistic was the fact that the author Christy Lefteri based a lot of it on her previous experience working with refugees as a UNICEF-sponsored volunteer in Athens, Greece. In addition to that though, there was also Lefteri’s personal connection as a daughter of refugees (both her parents fled war-torn Cyprus back in the 1970s), which combined with her volunteer experience to produce such a powerful and inspiring story. I know my review probably doesn’t say a whole lot, but in a way, the vagueness is a bit deliberate, as I feel the story already speaks for itself and nothing I say will be able to do it justice. All I’m going to say is that this book definitely deserves to be read – and sooner rather than later!