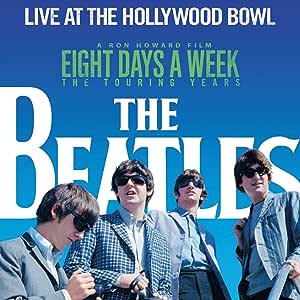 The Beatles - Live At The Hollywood Bowl

Heck, I liked all the songs... and you can hear the bass!

Only downside: I wish there were more songs. There was room on the CD.

A Fan
5,0 van 5 sterren Finally We Have 5 Star Beatlemania Live At Its Peak!
11 september 2016 - Gepubliceerd op Amazon.com
Geverifieerde aankoop
I am a first generation Beatles fan. This 2016 "The Beatles Live At The Hollywood Bowl" Remaster is a 5 Star album all the way and I'll tell you why. I have the original pressing of the 1977 Vinyl LP and the late George Martin, who was the Best at his craft according to many musicians that he worked with, did his best with 1964 and 1965 source material using 1977 technology.

I also have a 2 CD Import version of the Complete Hollywood Bowl Concerts with Paul's dead mic at the beginning of one of the shows and it sounds very raw. Some completists are complaining that all the shows weren't released in their entirety and are saying Capitol/Apple/UMe blew it and missed an opportunity BUT no Beatles product is released unless Paul McCartney, Ringo Starr, Yoko Ono and Olivia Harrison unanimously agree on it. Those 4 people now have the job of upholding the legacy of The Beatles. When Paul McCartney puts out a Live Album of one of his solo tours he picks the best version of each track to include on the album and pieces it together. Most artists also do this so The Beatles wouldn't officially release the complete concerts anyway. They would only release the Best Takes to compile a Live album. That's what was done in 1977 when George Martin mixed the LP. So it makes perfect sense that in 2016 those same takes would be used to be remastered by Giles for this CD and the LP to be released in November 2016. I love this CD! Giles and his team did a Great Job!

According to one of the articles I read on the release of this album, new soundboard quality source tapes were found in the Capitol U.S. vaults that were better than the original tapes used in 1977. The result is a noticeably improved listening experience plus we get we get 4 Bonus Tracks from those new tapes! Giles Martin explains the process and intent of this project in a "Soundcloud" podcast "Giles Martin Live At The Hollywood Bowl" that is worth a listen, He explains how the "demixing" software was developed and how it was used to reduce the screams while making the vocals and instruments clearer.

Some fans are even complaining about the cover art and its tie in to the Ron Howard "Eight Days A Week: The Touring Years" film. I say if it weren't for this film being made with added film clips solicited around the world from fans who actually saw The Beatles Live this CD might not have been released at all. This project was not meant to be an Anthology version with all of the 1964 and 1965 technological flaws intact. So I am thoroughly enjoying it for what it is - a job well done by Giles that was approved by Paul, Ringo and the wives of John and George acting on behalf of their estates. Thus, we FINALLY have the best version we are going to get of "The Beatles Live At The Hollywood Bowl" using 2016 technology and exactly as The Beatles organization intended to release it! To that I say "YEAH, YEAH, YEAH!"
Meer lezen
271 mensen vonden dit nuttig
Vertaal recensie in het Nederlands