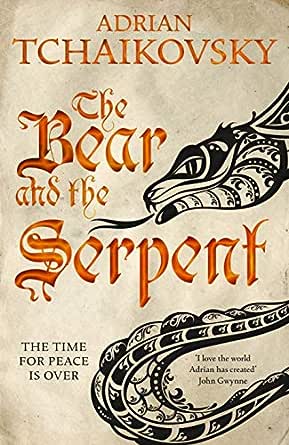 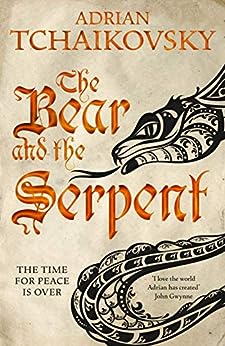 "It's addictively brilliant! The protagonist is vivid and sympathetic - and I love both the story and the world Adrian has created. It's meticulously thought out and utterly believable." --John Gwynne, author, Malice

"Equally deft in the realms of science fiction and fantasy adventure, Adrian Tchaikovsky knows how to take you to a place, no matter the setting . . . Maniye Many Tracks is a fascinating character; layered, strong, torn, constantly developing and hugely empathetic." --SciFiNow

The Bear and the Serpent is the second book in Adrian Tchaikovsky's epic fantasy series, Echoes of the Fall, following The Tiger and the Wolf.

As the south is in turmoil, an old terror emerges in the north . . .

Maniye, child of both Wolf and Tiger clans, has been named Champion of her people. But they're unsure if she's an asset – or a threat. To buy time, she joins Prince Tecuman's warband of outcasts and heads south, to help him gain his crown. She wants to discover her true place in the world, but instead heads into the jaws of a fierce new conflict.

Civil war threatens as Tecuman and his twin sister battle for the throne, for only one can rule. Yet whoever triumphs will carry a heavy burden, as a great doom has been foreseen that will fall across their whole world. And soon Maniye finds herself at the heart of a political storm.

Danger is also shadowing her old home, where Lord Thunder and his bear clan are attempting to unite the northern tribes. But only extreme peril will end age-old rivalries. An adversary from the most ancient of times is preparing to strike, putting their lands and their very souls in danger. And neither north nor south will be spared the terror to come.

Continue this sweeping coming-of-age fantasy series with The Hyena and the Hawk.

Ben H.
4,0 van 5 sterren A fine follow-up to The Tiger and the Wolf
31 augustus 2017 - Gepubliceerd op Amazon.com
Geverifieerde aankoop
The first book in this trilogy to be, The Tiger and the Wolf, is a fairly self-contained story; it could have stood alone. The Bear and the Serpent's new direction and quite original adversaries made getting into this book a bit less swift and easy than the start of book one. It initially felt more like a new adventure than the next step of an ongoing saga. But that change expanded the scope and gave the author room to tell a more epic story.

Most of the characters from book one are back and it's deeply satisfying to watch them evolve. As I mentioned, I felt a bit thrown at the beginning, as the perspective changed. While Maniye can still accurately be considered the protagonist, the journeys of other characters—spread across the known world—are engaging and continue to be filled with sympathetic casts and challenges.

There's a new existential threat to face and it's even stranger than the (earlier) coming-of-age of a young woman with competing tiger and wolf souls.
Meer lezen
Een iemand vond dit nuttig
Vertaal recensie in het Nederlands

JOSEPH VANUCCHI
5,0 van 5 sterren Never disappoints ...
15 februari 2017 - Gepubliceerd op Amazon.com
Geverifieerde aankoop
But this book from Adrian Tchaikovsky is something else. Really enjoyed it. Loved the world and characters from the first book and occurring events have only reinforced this. And the authors writing is only getting better, very smooth. Not going to say anything story wise, as things happening at the end are pretty amazing, especially if the nagging feeling some things inspire comes to pass...and if I mentioned them, and they didn't, well that'd be pretty catastrophic too lol. Anyway I highly recommend this book/series and will eagerly anticipate the next installment.
Meer lezen
Een iemand vond dit nuttig
Vertaal recensie in het Nederlands

D Griego
5,0 van 5 sterren Excellent Read
22 december 2017 - Gepubliceerd op Amazon.com
Geverifieerde aankoop
I loved the first book in this series and this second one also did not disappoint. I love the world the author has created and it's people. It's been a very long time since I felt terribly sad at reaching the end of a book and knowing I must wait several months for the next one to be finished. I await the third book with eager anticipation.
Meer lezen
Een iemand vond dit nuttig
Vertaal recensie in het Nederlands

Amber McLernon
5,0 van 5 sterren Absolutely stunning
11 februari 2017 - Gepubliceerd op Amazon.com
Geverifieerde aankoop
After reading The Shadows of the Apt I have been hard pressed to find anything with nearly the scope and skill of that series. this one is proving to match it. Amazing writing, wonderful characters, and some tantalizing hints at the end of this book that have me eagerly waiting for another kept me turning pages until sadly there were no more.
Meer lezen
2 mensen vonden dit nuttig
Vertaal recensie in het Nederlands