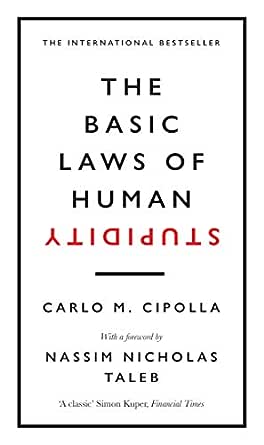 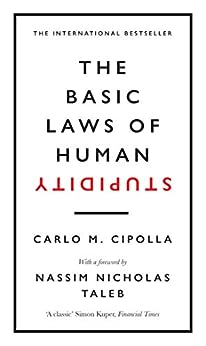 'This is brilliant' - James O'Brien, author of How to be Right

The five laws that confirm our worst fears: stupid people can and do rule the world.

Since time immemorial, a powerful dark force has hindered the growth of human welfare and happiness. It is more powerful than the Mafia or the military. It has global catastrophic effects and can be found anywhere from the world’s most powerful boardrooms to your local pub. This is the immensely powerful force of human stupidity.

Seeing the shambolic state of human affairs, and sensing the dark force at work behind it, Carlo M. Cipolla, the late, noted professor of economic history at the University of California, Berkeley, created a vitally important economic model that would allow us to detect, know and neutralise this threat: The Basic Laws of Human Stupidity.

If you've ever found yourself despairing at the ubiquity of stupidity among even the most 'intellectual' of people, then this hilarious, timely and slightly alarming little book is for you. Arm yourself in the face of baffling political realities, unreasonable colleagues or the unbridled misery of dinner with the in-laws with the first and only economic model for stupidity.

Ouderkirk
5,0 van 5 sterren This is a must read, Short and concise
3 mei 2014 - Gepubliceerd op Amazon.com
Geverifieerde aankoop
Dr. Cipolla has boiled down human stupidity into for basic groups, and then one of this groups into two sub groups.

This is a must read, for everyone to understand the nature of human stupidity. We all are stupid, to varying degrees and at various times. Reading this will reduce your own level of acting stupidly or being injured by the stupid.

Forewarned is fore-armed and this is excellent armament for all who interact with others. It gives you the insight to identify whom you are dealing with.
Meer lezen
5 mensen vonden dit nuttig
Vertaal recensie in het Nederlands

Amazon Customer
5,0 van 5 sterren Awesome
9 mei 2017 - Gepubliceerd op Amazon.com
Geverifieerde aankoop
Entertaining description of how the actions of some have such a disproportionate effect upon others. Hope I don't land in the stupid box.
Meer lezen
Een iemand vond dit nuttig
Vertaal recensie in het Nederlands