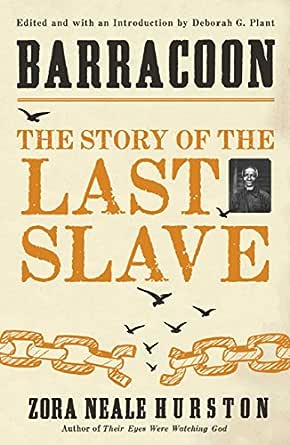 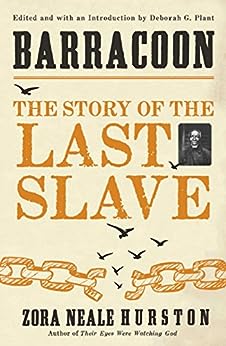 Barracoon: The Story of the Last Slave (English Edition) Kindle-editie

"Barracoon and its long path to print is a testament to Zora's singular vision amid so many competing pressures that continue to put us at war with ourselves."--Huffington Post

"Barracoon is an impactful story that will stick with you long after the final page."--Parade

"Sure to be widely read."--Kirkus Reviews

"Barracoon is a testament to [Zora's] patient fieldwork"--Vulture

"One of the greatest writers of our time."--Toni Morrison

"Short enough to be read in a single sitting, this book is one of those gorgeous, much too fleeting things...Brimming with observational detail from a man whose life spanned continents and eras, the story is at times devastating, but Hurston's success in bringing it to light is a marvel."--NPR

Abducted from Africa, sold in America.

“A deeply affecting record of an extraordinary life”- Daily Telegraph

A major literary event: a newly published work from the author of the American classic Their Eyes Were Watching God, with a foreword from Pulitzer Prize-winning author Alice Walker.

This account illuminates the horror and injustices of slavery as it tells the true story of one of the last-known survivors of the Atlantic slave trade.

In 1927, Zora Neale Hurston went to Plateau, Alabama, just outside Mobile, to interview eighty-six-year-old Cudjo Lewis, who was abducted from Africa on the last "Black Cargo" ship to arrive in the United States. Of the millions of men, women, and children transported from Africa to America as slaves, Cudjo was then the only person alive to tell the story of this integral part of the nation’s history. Hurston was there to record Cudjo’s firsthand account of the raid that led to his capture and bondage fifty years after the Atlantic slave trade was outlawed in the United States.

In 1931, Hurston returned to Plateau, the African-centric community three miles from Mobile founded by Cudjo and other former slaves from his ship. Spending more than three months there, she talked in depth with Cudjo about the details of his life. During those weeks, the young writer and the elderly formerly enslaved man ate peaches and watermelon that grew in the backyard and talked about Cudjo’s past—memories from his childhood in Africa, the horrors of being captured and held in a barracoon for selection by American slavers, the harrowing experience of the Middle Passage packed with more than 100 other souls aboard the Clotilda, and the years he spent in slavery until the end of the Civil War.

Based on those interviews, featuring Cudjo’s unique vernacular, and written from Hurston’s perspective with the compassion and singular style that have made her one of the preeminent American authors of the twentieth-century, Barracoon masterfully illustrates the tragedy of slavery and of one life forever defined by it. Offering insight into the pernicious legacy that continues to haunt us all, black and white, this poignant and powerful work is an invaluable contribution to our shared history and culture.

Read-A-Lot
5,0 van 5 sterren Important, impactful and ultimately fascinating!
8 mei 2018 - Gepubliceerd op Amazon.com
This is an important and fascinating historical document. It is rare that we have a narrative of one who remembers and recounts the journey from Africa to America, from free person to enslaved man. So, Zora Neale Hurston writing and working as a folklorist and cultural anthropologist took interest in the story of Kossula, the last surviving individual from the last slaving ship that touched down in Alabama in 1860, the Clotilda.

Here we have the remembrances from the perspective of the captive. As Zora says; “All these words from the seller, but not one word from the sold. The Kings and Captains whose words moved ships. But not one word from the cargo. The thoughts of the “black ivory,” the “coin of Africa,” had no market value. She was on a mission to give value to the words of the sold and she did just that over a series of conversations with Kossula.

“I had met Cudjo Lewis (his American name) for the first time in July 1927. I was sent by Dr. Franz Boas to get a firsthand report of the raid that had brought him to America and bondage, for Dr. Carter G. Woodson of the Journal of Negro History. I had talked with him in December of that same year and again in 1928.” The book is written in the vernacular dialect style and it takes a bit to get used to the rhythm, but once you fall in, you will remain locked to the page. I’m guessing Nora was aiming for authenticity and trying to present Kossula to the world the exact way she was hearing it. This might account, in some small way for the time between writing and publishing. The book was completed in 1931 and has just now, almost a century later been published. At least one publisher asked for Kossula’s life story in “language rather than dialect...... Hurston would not submit to such revision.”

Although slave narratives are in publication, Kossula’s story takes us from his African home through three weeks in the barracoon (essentially a holding hut for the captives before they were loaded onto ships) to 45 days at sea and then dry land in Alabama. He spent five years in bondage before emancipation came. The majority of slave narratives in print detail their bondage here in America but rarely, if ever? have we had an intimate look from the motherland to America.

Through these conversations, you can glimpse the culture and ways of being.

“De ole folks, you unnerstand me, de wise ones, dey go out in de woods and gittee leaves—dey know which ones—an’ mashee de leaves wid water. Den dey paint de dead man all over wid dis so he doan spoil till de king come. Maybe de king doan git dere till de next day. When de king come, my grandfather, he come wid him. “Befo’ anybody see de king, we know he is almost dere, because we hear de drum.”

The capture is given a detailed accounting but the middle passage is not discussed in depth, perhaps due to the harshness of memories. One thing that Kossula makes abundantly clear is the sense of loss and longing he always felt for his home. Deborah Plant does a masterful job setting the stage in her informative introduction that gives depth surrounding this project. There was some talk of plagiarism because Zora didn’t properly cite some sources she used for some of the folklore backgrounds. Seems to be, much ado about nothing.

Zora’s talent as a writer was already shining as the reader will see here. This book was completed in 1931 and Her Eyes Were Watching God wasn’t published until 1937, her most famous work. This is a work that belongs on every shelf. Even the appendix and glossary contain valuable tidbits. “In spite of the ethnic and cultural diversity of the people on the continent, Europeans and Americans referred to them, collectively, as “Africans.” This resulted in the belief that “‘Africans’ sold their own sisters and brothers.” I think it’s important for the discussion of slavery that we make clear and conscious distinctions between perpetrators, collaborators, and victims. Five stars! Thanks to Edelweiss and HarperCollins for an advanced ebook. Book drops on May 8, 2018.
Meer lezen
211 mensen vonden dit nuttig
Vertaal recensie in het Nederlands

Tucker Lieberman
5,0 van 5 sterren An intimate retelling by the last survivor of the Middle Passage
9 mei 2018 - Gepubliceerd op Amazon.com
Geverifieerde aankoop
Born in 1841 to the Yoruba people in West Africa, Kossola told the story of how he was captured at age 19 during a brutal massacre at his village by Dahomian warriors and put on a slave ship. He was interviewed in his old age in 1927 by Zora Neale Hurston whom he trusted with details of his life that he hadn't given to any other interviewer. Kossola was, then, the last known survivor of the last slaveship that arrived in America before the Civil War, and he was lonely in his old age, his wife and children having predeceased him. He recalled many details of daily life and culture in his original home in Africa although he had lived for 67 years in America. He described his dual identity as “Edem etie ukum edem etie upar”: One part mahogany, one part ebony.

Insightful historical commentary was provided by the current editor, Deborah G. Plant, bookending the interview transcription, and Alice Walker's helpful foreword gives a frame to help understand the impact of this narrative: "It resolutely records the atrocities African peoples inflicted on each other...This is, make no mistake, a harrowing read. We are being shown the wound....And we have suffered so much from this one [lie]: that Africans were only victims of the slave trade, not participants." Kossola also suffered at the hands of white people — having been enslaved until the end of the Civil War, lived under Jim Crow, and had a young son killed by a policeman — but this narrative is more heavily weighted toward his memories of Africa and how his sense of himself as an African impacted his life in America. Many of his traumatic memories are gruesome. All of his retelling is frank. A lot of thought has surrounded the curation of Hurston's interview manuscript over the years, and its publication today will surely be of great interest to many.
Meer lezen
154 mensen vonden dit nuttig
Vertaal recensie in het Nederlands

Amazon Customer
5,0 van 5 sterren Fantastic!
14 mei 2018 - Gepubliceerd op Amazon.com
Geverifieerde aankoop
It’s a short read, so short you can miss some aspects that are just incredibly insightful. I had to take my time with this one. Zora Neale Hurston was a talented anthropologist that captured the minute pieces of history that could be missed if you weren’t paying attention, but when you do, it’s life changing. Fantastic!
Meer lezen
54 mensen vonden dit nuttig
Vertaal recensie in het Nederlands

Jerry M.
5,0 van 5 sterren I liked hearing the story in Kossola's own words
23 mei 2018 - Gepubliceerd op Amazon.com
Geverifieerde aankoop
I liked hearing the story in Kossola's own words. It gave me very rare insight into tribal life in Africa; first hand impressions of being captured, marched, sold, shipped, and worked as a slave for 6+ years. I am impressed by the way former slaves from his tribe banded together to buy land and form AfricaTown in Alabama. I am saddened that he was cheated by his lawyer and suffered so much pain along with his family. Above all, I am grateful to God for his long life and his willingness to share this story with Houston and us.
Meer lezen
45 mensen vonden dit nuttig
Vertaal recensie in het Nederlands
Ga naar Amazon.com om alle 550 recensies te bekijken 4,6 van 5 sterren
Terug naar boven
Over ons
Verkoop bij ons
We helpen je graag
© 1996-2020, Amazon.com, Inc. en dochterondernemingen