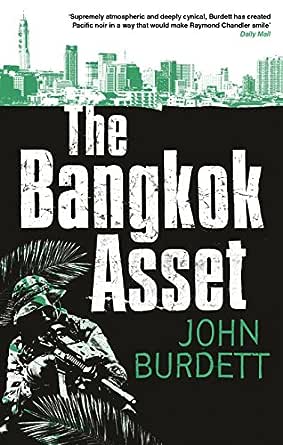 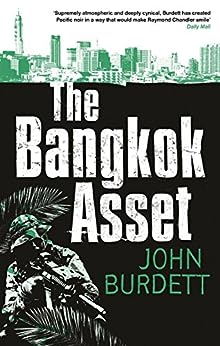 Wild and entertaining . . . Impressively, everything comes together for a dramatic and satisfying ending.
Publishers Weekly"

In his latest case, Sonchai is paired with young, female inspector Krom. Like him, she's an outsider on the police force, but she is socially savyy and a technological prodigy. In the midst of a typhoon they witness a deadly demonstration of super-human strength from a man who is seemingly controlled by a CIA operative. Could the Americans really have figured out a way to create some sort of super-soldier who is both physically and psychologically enhanced? Are they testing it, or him, on Thai soil? And why is everyone, from the Bangkok police to the international community, so eager to turn a blind eye?

The case will take Sonchai to a hidden Cambodian jungle compound for aging American vets where he will discover exactly how far a government will go to protect its very worst secrets - both past and present. It is also a case that will shake Sonchai's world to its very foundation and may finally force him to confront his lost father.

Roger Berger
1,0 van 5 sterren What Junk!
31 januari 2017 - Gepubliceerd op Amazon.com
Geverifieerde aankoop
What a disappointment. My favorite writer has gone off the deep end. He may be smoking too much of the week he writes about. This isn't even a novel, there's no story, no beginning, middle or end. I think its about a superhuman race developed by the CIA that will take over the world. I don't know why, the CIA already owns the world. The story takes us back to the horrible years of the Viet Nam war, the drugs, the mass murders and other hugely ugly subject matter. But to what end? Got me. When all is said and done this is one of the worst books I've read in years. Sad because John Burdett had been one of my favorite writers. No more, thank you. John, you let us all down with this piece of junk. Roger
Meer lezen
5 mensen vonden dit nuttig
Vertaal recensie in het Nederlands

crazypoet
2,0 van 5 sterren A Bleak and Half-Hearted Foray into Science Fiction Makes This the Worst Book in the Series
8 augustus 2015 - Gepubliceerd op Amazon.com
Geverifieerde aankoop
I've read --and loved -- the entire Bangkok series by Burdett. They are among my very favorite of entertainments; in part because they are more than mere entertainments. Well written, intertwined with Buddhist philosophy, intriguing societal insights, complex, multi-dimensional characters, and absorbingly exotic plots that don't follow the standard beats of the genre all make these novels stand out.

Until The Bangkok Asset, that is. Here's the book where Burdett loses his footing and stumbles off the cliff into shallow silliness.

It's worth noting straight away that the plot veers away from mystery and into pure science fiction. Perhaps Burdett's speculations about future humans proves prescient. Or perhaps ludicrous. That isn't so much the point for me, as science fiction is not a genre I read -- or find interesting. You may well feel differently. Many mystery readers also like Sci-Fi. If you are among those who do not...be warned that Burdett changes genres with this book.

A change in genre is not the only issue, here. As an observer of human psychology and a translator of Thai culture, Burdett is learned, insightful, and often profound. His science fiction speculation is much more shallow; he simply isn't able to explore his sci-fi premise with anything like the depth, knowingness, or subtly that he applies in his other books.

I went back and checked all the highlights I've made in Burdett books (usually on some philosophical point) and compared it to how many highlights in the Bangkok Assett: about 90% fewer here. Across-the-board, this is a shallower, less-thoughtful book. Filled with lots of dire warnings and claimed Big Insights but without any of the groundwork or elaborate explanation that Burdett provides in previous entries. The characters, too, don't feel fully like themselves. Sonchai, Chanya, Vikorn, Nong: they all feel perfunctorily drawn and, for the first time in this series, like their actions are NOT arising organically from their established psychology but rather, from whatever random twist Burdett needs them to enact. Everything about this book feels forced.

The book ends on doubly-bleak note. Not only are our characters lost, splintered from another, fearful, and confused but Burdett spend the last 50 pages arguing that humanity as we know it is essentially over. All but a few enhanced elites are bound to be slaves.

Even worse, Burdett seems to be setting up a sequel. In a way, that makes sense. Burdett has no ending to this book. It just stops. I guess because he wrote himself into a corner or, more likely, the manuscript was due to the publisher. So, for no good reason (that is, no reason intrinsic to the book/story itself) it appears we are going to be subjected to more of this.

The ultimate problem here is, of course, is that Burdett has set up a coming world-apocolupse that is far, far, FAR outside the scope or capabilities of Sonchai -- or even Vikorn -- to "solve" (not that Sonchai really solves most of his cases in the traditional sense but you know what I mean). There is nothing for Sonchai to do but be a passive witness to Burdett's endlessly bleak prognostications to unfold. He's wrote a plot that is all about what's happening in the highest levels of government in America, Russia, and China, none of which Sonchai will ever have access to. Unless, of course, Burdett drifts even further afield in his plotting and inorganic characterizations.

Burdett, let me offer this advice: skip whatever you've got planned for the sequel. Maybe come up with some cutesy reason to dismiss it all at the beginning of your next book -- some reason to reboot -- and try to get back to the heights of your previous accomplishments. Ultimately, these are entertainments, readers will forgive a single bad entry, just as we forgive our favorite TV shows when they have a poor episode. If you've simply run out of insights and activities for these characters (which seems a strong possibility) then it's better to move on to a new idea entirely, rather than degrade what was once among the best.

Mal Warwick
3,0 van 5 sterren The strangest novel yet in a series of strange ones
18 juni 2018 - Gepubliceerd op Amazon.com
Geverifieerde aankoop
There are five previous novels in John Burdett's Royal Thai series featuring Bangkok police detective Sonchai Jitpleecheep, and every one of them is strange. The detective is a devout Buddhist (a former monk) and prey to the supernatural fantasies so common in Thailand. In some of the books, he becomes caught up in delusions about demons and other spirits that many rational Western readers are likely to find annoying. I did. (I persisted because the mysteries were otherwise quite good.) But in his latest entry in the series, The Bangkok Asset, Burdett outdoes himself. The plot in this off-beat murder mystery takes readers into the realm of science fiction. The two genres don't mix well here.

This sixth entry in the Royal Thai series opens with a gruesome murder that cannot be explained as the work of any human being. (Take my word for this. You don't want to know details.) It doesn't take long for Sonchai to discover that, in fact, no human did commit this crime. The perpetrator was a transhuman known as the Bangkok Asset. Now, just in case you're unfamiliar with the term, here's what transhuman means in this context: a human being has been "enhanced" in numerous ways through genetic manipulation, drug therapy, and a brain implant to increase his cognitive abilities and physical strength to extraordinary proportions. Achievements of this sort are the stuff of science fiction. Although research in neuroscience, artificial intelligence and genetics points to the possibility that some of this may be realistic several decades in the future, it's not today. Currently, the "enhancements" we observe are limited to such things as prosthetic limbs, primitive gene therapy, and contact lenses. Research into transhumanism today tends to involve questions of ethics and religion at least as much as science. The Pentagon is having wetdreams about creating super-soldiers much like the Bangkok Asset. I'm sure the military in other major world powers is as well.

Folded around this fantasy is a suspenseful mystery story involving several of the characters familiar to readers of the Royal Thai series: Colonel Vikorn, Sonchai's boss and "one of Asia's richest kingpins and a feudal baron of the old kind"; Sonchai's wife, Chanya, a former prostitute with a Ph.D.; and his mother, Nong, the madam who owns a brothel called the Old Man's Club. Burdett introduces a suite of new characters in The Bangkok Asset: Joseph George Goldman, a corrupt, retired CIA officer who controls the Bangkok Asset; Dr. Christmas Bride [sic], the British scientist who pioneered the use of LSD in the CIA's MKUltra mind control program; Inspector Krom, a gorgeous young Chinese-Thai police officer who is tattooed from head to foot and a lesbian; and a Chinese professor with a taste for young transgender Thai men. You see what I mean? This is a very weird book. It's hard to know how Burdett will be able to continue the Royal Thai series. Where can he possibly go from here?
Meer lezen
Vertaal recensie in het Nederlands

Patrick Mc Coy
2,0 van 5 sterren Another Fantastical Plot
18 januari 2019 - Gepubliceerd op Amazon.com
Geverifieerde aankoop
I think John Burdett was running out of ideas for his Bangkok Thai-American detective Sonchai Jiptleecheep several volumes ago, but decided to read the most recent volume, The Bangkok Asset (2015) since I was on my way for a vacation in Bangkok. I mean I had already read the previous five novels, but each one was more fantastical than the previous and the same can be said for this one. The first half of the book had some good Bangkok/Thailand background information then it went into super spy trans-human super species over drive and became much less interesting since the characters were require to disseminates s much context and background information via dialogue. It has all the tired aspects of the previous novels-evil Americans-check, some salacious sex-check, elements of fantasy/sci fi-check. I guess I'm something of a completest I kinda feel the same way I did when I watched the last season of House of Cards without Kevin Spacey. I'm not proud of it, but I somehow had to see how it ends.
Meer lezen
Vertaal recensie in het Nederlands
Ga naar Amazon.com om alle 225 recensies te bekijken 3,4 van 5 sterren
Terug naar boven
Over ons
Verkoop bij ons
We helpen je graag
© 1996-2020, Amazon.com, Inc. en dochterondernemingen