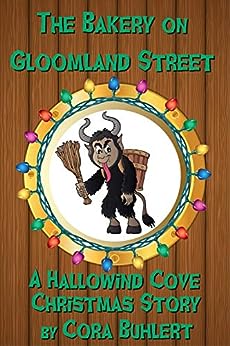 It's Christmas time in the permanently fog-shrouded seaside town of Hallowind Cove, which is also known as the "Harbour of the Weird".

Rachel Hammersmith is new to Hallowind Cove and has recently taken over the bakery on Gloomland Street, after Marie Percht, the previous owner, retired.

However, Marie Percht didn't tell Rachel everything, when she retired. She didn't mention the fog, for starters, and she also didn't mention that her bakery plays a vital role during the Christmas season and not just as a provider of holiday cookies either.

For the Krampus, a yuletide monster from alpine folklore, is coming to Hallowind Cove. And the only thing that can keep him from wrecking the town and ruining Christmas are pastries baked according to a secret recipe. Unfortunately, Rachel has no idea what the recipe is.

However, with the help of fellow newcomer Paul MacQuarie, Rachel will bake up a storm to pacify Krampus and save Christmas.

This is a novelette of 9300 words or approximately 32 pages in the Hallowind Cove series, but may be read as a standalone.