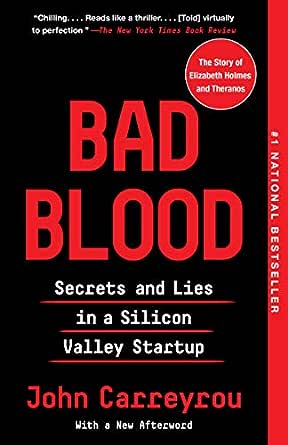 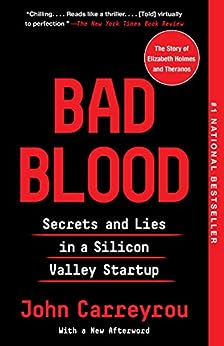 "A great and at times almost unbelievable story. . . . Theranos may be the biggest case of corporate fraud since Enron." --New York "Chilling. . . . Reads like a thriller. . . . Carreyrou tells [the Theranos story] virtually to perfection." --The New York Times Book Review "Gripping. . . . Riveting. . . . [Told] with a momentum worthy of a crime novel." --Los Angeles Review of Books "Riveting. . . . For all its boomtime feel, there are timeless aspects to Theranos' story. Venality is age-old, but so is courage, and that of the ex-employees who blew the whistle on its deceptions is restorative. . . . And more than an honorable mention should go to Carreyrou, a dogged old-school reporter uncowed by Theranos' legal hardball." --San Francisco Chronicle "Engrossing. . . . Hard to put down. . . . Boasts movie-scene detail. . . . Theranos employees are the story's heroes, with the force of journalism not far behind." --Science "A veritable page-turning. . . . Gripping. . . . Presents comprehensive evidence of the fraud perpetrated by Theranos chief executive Elizabeth Holmes... Unveils many dark secrets of Theranos that have not previously been laid bare." --Nature "This is a 'stay up all night to read' book that is just as propulsive, shocking, and riveting as the best thriller novels." --Bustle "I found myself unable to put it down once I started. This book has everything: elaborate scams, corporate intrigue, magazine cover stories, ruined family relationships, and the demise of a company once valued at nearly $10 billion." --Bill Gates, "Five Books I Loved in 2018" "Riveting. . . . Compelling. . . . [Carreyrou's] unmasking of Theranos is a tale of David and Goliath." --Financial Times "A fascinating true story that reads like a suspense novel. . . . A telling parable of Silicon Valley magical thinking." --Selby Drummond, Vogue "In Bad Blood, Carreyrou tells the full, gripping tale of how he slayed the 'unicorn' in a fascinating look at how buzz and billions can blind people to facts." --Marie Claire "A parable about Silicon Valley delusion. . . . Gossipy fun comes from seeing which high-profile man (James Mattis, Joe Biden) gets drawn into Holmes' scammy web next." --Elle "A thorough and devastating piece of reporting that deserves a place alongside the masterworks of the inside-the-boardroom business genre. . . . He quietly compiles detail after damning detail into a fascinating narrative." --The Weekly Standard

"Masterfully reported." --Bethany McLean, bestselling coauthor of All the Devils Are Here

The full inside story of the breathtaking rise and shocking collapse of Theranos, the one-time multibillion-dollar biotech startup founded by Elizabeth Holmes—now the subject of the HBO documentary The Inventor—by the prize-winning journalist who first broke the story and pursued it to the end.

“The story is even crazier than I expected, and I found myself unable to put it down once I started. This book has everything: elaborate scams, corporate intrigue, magazine cover stories, ruined family relationships, and the demise of a company once valued at nearly $10 billion.” —Bill Gates


In 2014, Theranos founder and CEO Elizabeth Holmes was widely seen as the female Steve Jobs: a brilliant Stanford dropout whose startup “unicorn” promised to revolutionize the medical industry with a machine that would make blood testing significantly faster and easier. Backed by investors such as Larry Ellison and Tim Draper, Theranos sold shares in a fundraising round that valued the company at more than $9 billion, putting Holmes’s worth at an estimated $4.7 billion. There was just one problem: The technology didn’t work.

A riveting story of the biggest corporate fraud since Enron, a tale of ambition and hubris set amid the bold promises of Silicon Valley.

DB Cooper
5,0 van 5 sterren Impossibly too good to be true
22 mei 2018 - Gepubliceerd op Amazon.com
Geverifieerde aankoop
This is an impeccably researched and referenced account of the Theranos saga. As a long-time observer and sometime competitor of Theranos I watched this tale unfold whilst working at a couple of established IVD companies. Everyone I knew who had ever developed an assay or instrument knew this was smoke and mirrors, impossibly too good to be true. What I never suspected was just how personally dishonest EH had been, and for how long the complex deception was maintained. Whilst I've met a few egregious individuals working for big companies, there are enough checks and balances (QA/RA, Med/Sci Affairs, CLSs and other professionals etc) in place to stop harmful devices getting out the door.

The subject matter - developing devices and assays - is a complex dry topic, difficult to write engagingly about. But JC does a workmanlike job and I read this in one go after its midnight Kindle release. My only nit to pick is the poor editing: there are so many uses of '....named....' as in 'an engineer named John Smith' or 'a restaurant named Joe's Bar' that it got irritating. Find/replace 'named' with a comma would have worked fine in most cases. The text was also repetitive - eg '...an award named after Channing...' gets at least 2 mentions. But not enough to lose a star.

Kudos to the good people at Theranos who had the courage to get the story out and for JCs persistence into a headwind of legalistic intimidation. I've heard Theranos is now a case-study for MBA students: this book should be required reading for anyone thinking about 'disrupting' the medical devices industry. There are lives at stake.
Meer lezen
698 mensen vonden dit nuttig
Vertaal recensie in het Nederlands

Todd Adams
5,0 van 5 sterren Fascinating, horrifying, and richly detailed account of corporate ambition gone awry.
22 mei 2018 - Gepubliceerd op Amazon.com
Geverifieerde aankoop
I started this book and could not put it down. It's a horrifying true story of a driven entrepreneur whose only overriding goal was to become insanely rich. And she would do anything, any unimagineable thing, to get there.

Elizabeth Holmes leveraged her family's high profile connections to draw in early investors and supporters, who were not very inquisitive on details, nor very skeptical in nature. Drawing on the good name and reputation of these early supporters, she was able to build an impressive roster of other supporters with stellar reputations in tech and venture capital circles. From there, it was just a matter of stage managing the house of cards she was building.

Holmes crafted a Potemkin village that had fooled investors, customers, and visiting dignitaries. Her product demonstrations were outright theater, staged managed illusions worthy of David Copperfield. Theranos employees in on the ruse were assured it was just temporary, until the actual product could be perfected and the results repeatable. That day would never come. Those on the outside who also worked in this field had well founded and grave doubts about how Theranos could be touting a product that seemingly defied both logic and physics. Their suspicions, proven to be correct, was that it was too good to be true.

Without a trace of guilt or regret, she induced powerful tech workers to leave lucrative careers at other major tech firms, giving up millions in stock options, to come work for Theranos, surely knowing the whole thing would collapse one day. When skeptical board members asked to see data affirming the effectiveness of their product, Holmes would defer, saying those papers were in perpetual legal review. Some employees, when they were no longer useful to her, or deemed disloyal, were immediately and unceremoniously marched out.

This is a real life thriller, the story of someone who is a true diabolical movie villain. Holmes is portrayed vividly as a paranoid sociopath who could also be disarming, charmingly manipulative, utterly ruthless and devoid of conscience. This is a tale of corporate greed and lack of regulatory oversight gone all awry.
Meer lezen
401 mensen vonden dit nuttig
Vertaal recensie in het Nederlands

carilynp
5,0 van 5 sterren I wish I could give this book 10 stars
27 mei 2018 - Gepubliceerd op Amazon.com
Geverifieerde aankoop
It takes a mighty strong person and an incredible investigative journalist to take down a multibillion company lead by a CEO and her partner who are doing nothing but telling lies, mistreating their employees, taking millions of dollars under false pretenses from Fortune 500 businesses and wealthy investors, betraying their esteemed board members, and worst and most harmful of all, putting the lives of their end customers in serious jeopardy because the technology that they claim to have engineered does not exist nor has it been FDA approved or tested. This is John Carreyrou’s BAD BLOOD: SECRETS AND LIES IN A SILICON VALLEY STARTUP. Carreyrou went to monumental lengths over the course of several years, with the help of named and unnamed sources who worked or were connected to Theranos, the company, which claimed to have created a blood-testing device that with ‘one drop of blood’ could obtain hundreds of test results thus saving lives. Not only were their little machines ineffective but they were doing no such thing. Meaning, they could not provide accurate test results because they were not even obtaining them. Rather, they were using commercial analyzers in their place. At the helm was Theranos founder and CEO Elizabeth Holmes, a Stanford drop-out who had a brilliant idea, but it was never brought to fruition. She simply leads people to believe it was with her charm. A lot of people.
It is staggering how many people she swayed. We’re not just talking about a co-worker or two but former heads of state, who later joined her board, people who amassed fortunes in the billions who were willing to loan Theranos money, major corporations including Walgreens and Safeway who wanted to get in on the ground floor, and many more. It is equally astonishing how so many smart, successful people were not taken aback by her freakish obsession with imitating Steve Jobs. Perhaps, they chalked this up to her eccentricity.
It took courage for people to come forward. They were threatened with lawsuits that could bankrupt them ten times over, by one of the leading and most intimidating litigators in the country. Carreyrou, a Pulitzer Prize winning investigative journalist, who has been with The Wall Street Journal for almost 10 years, had the support of his editor, newspaper, and its attorneys. He never thought for a minute to back down. The result – a series of articles in the paper that exposed Theranos and Holmes for the fraud they committed.
It is dumbfounding to read BAD BLOOD and to think that Holmes and her number two in command, Sunny Balwani, also her romantic partner, which was kept secret, got away with so much for so long, and even when finally confronted and their hands were forced, they still would not admit fault. Is Holmes a criminal? Is she delusional?
What I do know is that you will not be able to put this book down.
Meer lezen
272 mensen vonden dit nuttig
Vertaal recensie in het Nederlands
Ga naar Amazon.com om alle 2.914 recensies te bekijken 4,8 van 5 sterren
Terug naar boven
Over ons
Verkoop bij ons
We helpen je graag
© 1996-2020, Amazon.com, Inc. en dochterondernemingen