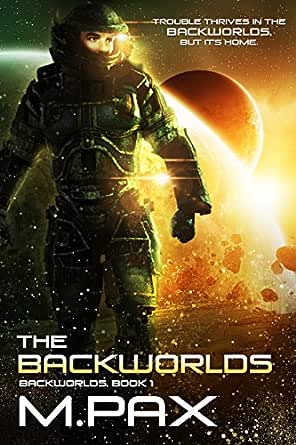 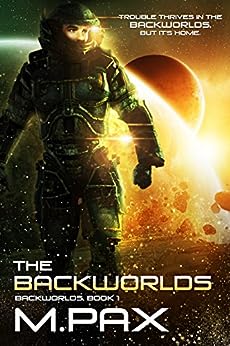 In the far future, humanity settles the stars, bioengineering its descendants to survive in a harsh universe. This is the first book in the science fiction series, The Backworlds. A space opera adventure.

After the war with the Foreworlders, Backworlders scatter across the remaining planets. Competition is fierce, and pickings are scant. Scant enough that Craze’s father decides to improve his fortunes by destroying his son. He tells his only boy their moon isn’t big enough for them both and gives Craze a ticket for the next transport leaving the space dock.

Cut off from everyone he knows with little money and no knowledge of the worlds beyond, Craze must find a way to forge a new life and make his father regret this day. First, he must survive.
click to open popover

Ruth Jackson
5,0 van 5 sterren a great romp that is filled with action from the beginning
13 november 2018 - Gepubliceerd op Amazon.com
Geverifieerde aankoop
I love that this story takes place in a far away place. I needed to get off the Earth for a while to get away from some sadness, and this was the perfect read to help m e do just that. The characters are hilarious, and Craze, the main character is totally endearing. The bad guys are totally bad and the good guys are totally good, even if they are "criminals" by most legal definitions. Their hearts and their intentions make them fun and easy to like. I loved the pace of the book, and as usual I devoured it in a couple of hours of totally enjoyable reading. This is a great story for folks who want a light-hearted story that will touch you on a deeper level if you will let it. Set in a far away galaxy with all the fun of space travel and exploring different worlds and different types of people, it brings back the feeling of some of my favorite books from my youth.
Meer lezen
2 mensen vonden dit nuttig
Vertaal recensie in het Nederlands

Sacha V
5,0 van 5 sterren Worth the wait
4 februari 2016 - Gepubliceerd op Amazon.com
Geverifieerde aankoop
Craze is a Verkinn from the planet Sienga. His people appreciate hard work and deal making. Which he's done. But with the approval of the council his father Bast is taking on a second wife. The second wife happens to be Yerniss, Craze's girlfriend. In order to make things simpler, Bast and the council label Craze a Leecher, which is like calling him a welfare queen and among the Verkinn, it's one of the worst things you can be branded.

Being handed a few chips and a backpack with a few more items, Craze is chased down to the docks by members of the council where he's put on a ship to Elstwhere. On the ship he meets and befriends two Aviarmen named Talos and Lepsi who are on their way to buy a ship and make their way out on the Edge.

On Elstwhere Craze also meets a shape shifter who essentially makes him the fall guy for a shifty deal with some Foreworlder's. The deal goes south and Craze gets picked up by the law, but his new friends Talos and Lepsi convince the lawman that Craze is just a naive fool. Together with the lawman they begin tracking down the Foreworlders.

I loved this book. I'd been meaning to read it for a long time and when I finally started, I couldn't put it down. The writing is tight, the characters are tight, and the worlds are clever and the imagery fantastic. The pacing is good so it makes for a quick read.

The interaction between Craze and the Aviarmen is great and the way they bond is believable. Essentially they are all starting out new and need friends in order to survive out on the Edge. The one gripe that I have is with the lawman, Dactill. The way that he finds himself as part of the main group of characters seems a bit convenient (not that he's with them, but why he stays) but this is the first book in a series so I'm sure we'll get a bit more about him.

This book really entertained me.

I love character driven stories and I frankly thought at the beginning that there was no way a shallow self absorbed character like this was going to get me through the story.

The problem is that for the most part the story is well written and the style of writing drew me into the story.

It took a while for my thick head to figure out that Craze was some sort of gene-engineered made for space being. And as I read I began to wonder if perhaps he wasn't a victim of some bit of inbreeding. Craze reminds me of a few people who at the age of 30 were still sponging off their parents. But, it might be in this case that his parents may be overly opportunistic and have continually used him and this time they gave him the boot and his father stole his girlfriend. Also, unless I got things wrong I think all of this happened with the approval of his mother.

These things come out throughout the narrative and some of Craze's inner dialogue.

Reluctantly Craze leaves. To be honest he's forced out by use of some sort of electronic prod. He has to go to Elstwhere and from there he has to make his own life. Craze wants to own a bar and his thoughts constantly return to the orderliness of his racks of exotic liquors. I think that Craze may be a bit OCD. On the way to Elstwhere he meets Lepsi and Talos some Aviarmen who are on their way to obtain a ship to begin their own enterprise. Craze gets involved with them from the point of view that he too must make his own life now. He sees them as a means to his end.

They also seem to have the same revenge filled nature that Craze is beginning to acquire.

This whole story begins to become of comedy of errors with most of the characters coming off as being users. They are using each other and any one they can to obtain their goals.

Craze meets the -possibly bisexual -Gattar, a Jax who introduces him to a scheme to obtain chocolate- which is precious. Lepsi and Talos recognize the Jax and clue Craze into how the chocolate might be a red herring for the trafficking of prohibited weapons from Earth or the Fore'worlds.

Add in the involvement of local authorities and all the best laid plans....

As a forewarning to everyone even though this book is long enough to be considered at least a novella and probably a novel it completes with the air of being incomplete because it's part of a series and because the author chose to end it as she chose to end it.

All I can say is if her engaging and humorous style prevails throughout the series I'll have no problem with these stories. It kept reminding me of the Retief stories by Keith Laumer- except lacking the strong sensible character that was Retief.

Nonetheless Craze has some redeeming qualities and his associates prove to be both a foil and a balance for him.

Nice Entertaining Sci-Fi and Strange alien fiction- these characters are not human and for the most part don't act any more human than a bit of anthropomorphizing here and there like salt an pepper for flavor.

This novella-length prequel made for quick reading, introducing an amazing galactic civilisation, a rich universe (it had my imagination running riot...) filled with a host of places (what great names such as Mortua, Wism, Danysovia...) and a variety of interesting and vividly-portrayed, colourful bio-engineered beings from old "fabled earth" like the Verkinn, Jix, and the aviarmen, all with their own distinct set of physical/character traits.

I really liked the main character Craze, whose main goal is to own his own bar, and to have one up on his father, Bast, who has cut him off from family and friends and run him out of town. He is a roguish type of character, but still appealing, strong and resilient when needs be, yet also naive at the same time.