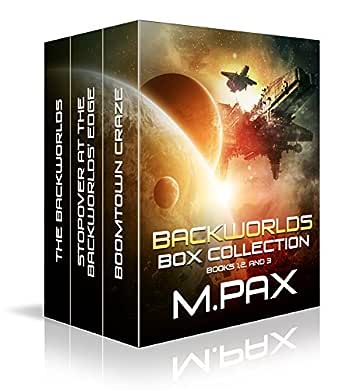 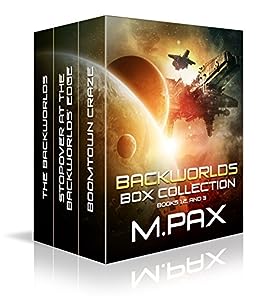 In the far future, humanity settles the stars, bioengineering its descendants to survive in a harsh universe. This set contains the first 3 novels in the science fiction series, The Backworlds. A space opera adventure.

The Backworlds
After the war with the Foreworlders, Backworlders scatter across the remaining planets. Competition is fierce, and pickings are scant. Scant enough that Craze’s father decides to improve his fortunes by destroying his son. He tells his only boy their moon isn’t big enough for them both and gives Craze a ticket for the next transport leaving the space dock.

Stopover at the Backworlds’ Edge
Revenge is on Craze’s mind. He chews on it every day along with the relentless dust on Pardeep Station. He dreams of grander wealth, enough to make his father choke. That’s the dream consuming him when the interstellar portal opens, spitting out a ship that should no longer exist. A battleship spoiling for a fight. Yet the war with the Foreworlds ended two generations ago.

Boomtown Craze
Craze is only days away from the grand opening of his shiny new tavern. The starway opens, bringing in a loony Backworlder intent on mucking up his carefully laid plans. Gaunt and trembling, she claims her spaceship is possessed. She also has a connection to the underworld, threatens to end Craze’s prosperity before it begins.
click to open popover

Richard Meinhardt
5,0 van 5 sterren We are all different!
5 maart 2017 - Gepubliceerd op Amazon.com
Geverifieerde aankoop
This series of books was written a little different than most. In most of the books I read the characters are presumed to be human with a few variations. In this series everyone (almost) is a different race and the author describes them very well and you have to picture them in your mind. A good imagination is a must for reading this! I enjoyed this series to the fullest. Well written and with a knack for holding your attention, I really couldn't put it down. Maybe I can't come up with the words to fully describe my enjoyment but, do yourself a favor and pick this one up!
Meer lezen
5 mensen vonden dit nuttig
Vertaal recensie in het Nederlands

Dan Staschiak
5,0 van 5 sterren My main disappointment with book 1 is that it felt short
13 maart 2017 - Gepubliceerd op Amazon.com
Geverifieerde aankoop
I received a free copy of book 1 in Galactic Empires. I read it, then received books 1 & 2 for free for evaluation purposes by signing up for the author's email list. I read it, and decided to buy book 3 (and the digital box collection was cheaper than buying book 3 alone). So I have 3 digital copies of book 1, 2 of book 2, and 1 of book 3. Oh well. On with the review.

If you're unfamiliar with the series, humanity colonized numerous worlds, and modified DNA so that "humans" could live on remote, less hospitable worlds. There are many species, and the characters are colorful, quirky, and memorable. The worlds tend to be bleak landscapes, but the characters' relationships and desire for a decent future are what drive them. The characters tend to be driven by certain traits to a fault, yet they don't feel painfully one-dimensional. By book 3, I was thinking "What are these lovable misfits up to now?"

Book 1 sets up the story of how Craze, one of the main characters, is forced to look for a new home, hopes to find incredible riches, and finds friends. My main disappointment with book 1 is that it felt short. I wanted more story about their search for a new home. But it was a very enjoyable read. Book 2 finds the gang already living at their new home. Then disaster and terrible luck strike simultaneously. The crew work to figure out how to get out of the situation alive. Pretty straight-forward plot. Book 3 probably gave me the greatest range of emotions as a reader. I laughed, I cringed, I despised, and I hoped. Once again, not all of the group's problems have been resolved, and they must deal with the consequences of their choices. Books 2 and 3 had a few grammar/syntax/punctuation errors, but they didn't take away much from the reading experience. This is a light-hearted, sometimes-hopeful, sometimes-dark space opera. I wasn't sure that I'd enjoy it, but in the end, I kept going back for more. Try it, I think you'll enjoy it, too.

Kindle Customer
5,0 van 5 sterren I'm glad that I found it!
1 september 2017 - Gepubliceerd op Amazon.com
Geverifieerde aankoop
This is quite an enjoyable read. M. Pax builds a universe that isn't perfect, and far from it. This is not your spit polished perfect future where all of the things are nice, and all of the places are close. This also isn't a universe where the language that they speak is exactly yours. This feels like a progressed English from more casual and rural surroundings. I can hear the twang of the speech of some of the charecters in my head, and it reminds me of people that I have known. This series follows a group of Genetically Modified humans through a number of misadventures. The characters in this series are relate-able in that they are far from perfect, to greedy, to moody, and eventually many of the characters see themselves for what they are and try to improve themselves. Now that I am done with the first three books I can only hope that there are more, as with any good series I am left wanting more.
Meer lezen
Vertaal recensie in het Nederlands

Weteddie
3,0 van 5 sterren I'm not a FoWo.
4 september 2019 - Gepubliceerd op Amazon.com
Geverifieerde aankoop
I liked the humor and play on words contained within these three novels. The development and introduction of the main six characters are a interesting interactions between all involved as the story progresses. The novels should be read in order because each novel builds upon the one before it.
Meer lezen
Vertaal recensie in het Nederlands
Ga naar Amazon.com om alle 31 recensies te bekijken 4,2 van 5 sterren
Terug naar boven
Over ons
Verkoop bij ons
We helpen je graag
© 1996-2020, Amazon.com, Inc. en dochterondernemingen