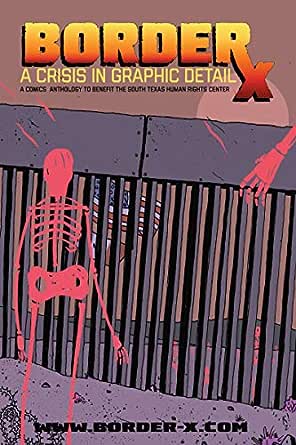 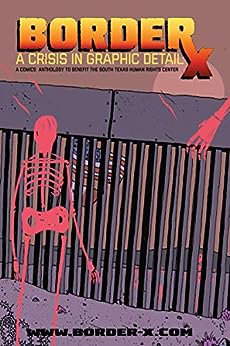 "Art has always changed and challenged systems, and the artwork in the pages of BORDERx does just that. Read this anthology so we can build a new world together." -Kathy Najimy, actress, comedian, and women's rights activist

"BORDERx explores with incredible honesty what is happening right now to migrant families at our southern border. The art within these pages asks us to be both accountable for stoping these atrocities and for creating a just world." - Dione Friends, former Communications Director, ACLU Texas

"BORDERx's visual storytellers offer poignant glimpses into the heart-wrenching experiences of hopeful migrants and asylum seekers who risk everything in their search for a better life." -Cynthia von Buhler, creator of Minky Woodcock: The Girl Who Handcuffed Houdini and The Illuminati Ball

"Art has the power to both reveal truths about our world as it is and help us envision the world we want. Each page within BORDERx is a call to action for our shared humanity." -Kristina Kiehl, Film Producer and Co-Founder Voters for Choice

Prologue by Senator Jeff Merkley (D-OR) with an introduction by W. Warren Binford and Michael Bochenek

Paul Axel
5,0 van 5 sterren A Collection of Comics Doing Some Good!
15 mei 2020 - Gepubliceerd op Amazon.com
Geverifieerde aankoop
This is a truly impressive comic anthology. While there have been charity anthologies in the past, the organization of BORDERx is proof of how much this anthology succeeds as an academic work of sociological, historical, and artistic value.

The first two sections, "The Exhibits" and "The Response," establish the thesis of this work: what is happening on the southern border of the United States constitutes a humanitarian, legal, and moral crisis. Comics in "The Exhibits" are based off sworn testimony from migrant children who have faced abuse at the hands of the United States government from June 2019 - even though the case itself, FLORES v. BARR, has been ongoing since the 1980s (with the name of the Attorney General changing over time). The longevity of this case alone should provide sufficient evidence of federal malfeasance. Section two, "The Response," highlights some of the work that many non-profits and charitable organizations (like the South Texas Human Rights Center) do to help migrants. If Section One is damning evidence of an uncaring American public, Section Two demonstrates how that is not the case; there are some angels among us who look past status and nationality to see the inherent humanity in those coming to our borders.

Section three, "The Context," provides exactly that - a broader context to the crisis. Some of the stories focus on individual experiences of those who are tangentially related to the detainees in some way. In Phoebe Cohen's "As Long As They Come Here Legally," we see the experience of a woman who is protesting the conditions (and operation) of the detainee camps considering her own family's path to the United States and how closely it resembles the experience of those coming now to the southern border. Anyone remotely aware of the bloody history of the 20th century should be able to clearly see the comparisons between immigrant experiences. In my own piece (not to toot my own horn), "...But It Does Rhyme," I show a long American history of detention centers and concentration camps. My goal in this comic is to demonstrate that the camps on our border are not sui generis; historically, the United States has often relied on such programs to control and contain groups of people it deems some sort of threat. Overall, "The Context" puts on display the historical undercurrents that allow the federal government to establish detention camps in the first place.

Sections four and five, "The Ruminations" and "The Posters," are where the reader will find the most artistically expressive pieces of BORDERx. Here, creators play with the themes that surround this crisis and apply them to short comics in a wide variety of genres, from science fiction to horror to slice-of-life, and a stunning collection of WPA-style posters. They are wonderful examples of the value of the arts - they can bring awareness without exhortation or clobbering a reader over the head with a message, but the message is there for those who will listen.

BORDERx marks an important milestone for charity anthologies. Where many charity anthologies have presented their cause celebre as is - that is, "you know about this, you know it is a problem, and here are some stories about it," BORDERx breaks ground in its authentic attempt to present the facts and context of the matter at hand. It assumes a level of vague, general awareness in its readers and acts as an educational opportunity. The end result is that the reader will come away from BORDERx with a deeper and more detailed understanding of a situation that merits greater attention, and - most importantly - will be prepared to discuss and debate the migrant crisis thoughtfully and intelligently. For this reason alone, I highly recommend BORDERx to anyone who enjoys comics and anyone looking to better understand the crisis on our border.

Marissa
5,0 van 5 sterren Excellent
16 juni 2020 - Gepubliceerd op Amazon.com
Geverifieerde aankoop
Powerful and well done, this anthology really brings attention to current as well as past controversial issues. It was a very moving read that certainly resonated with me and motivated me to take a closer look at what’s going on in our country.
Meer lezen
Een iemand vond dit nuttig
Vertaal recensie in het Nederlands

Roel R. Torres
5,0 van 5 sterren An Important Work on an Important Issue
17 mei 2020 - Gepubliceerd op Amazon.com
Geverifieerde aankoop
This book shows how art can tackle difficult real world political issues. There are many stories here, created by over 70 contributors from around the world, that are lovingly crafted and demonstrate both remarkable talent and a true sense of passion in the name of a righteous cause. These are stories that speak to the heart, the stories are consistently well rendered, and the overall package is first-class in every way. (Full disclosure: I contributed to the project, and I'm extremely proud of the way it turned out!)
Meer lezen
Vertaal recensie in het Nederlands

Agent Judy
5,0 van 5 sterren deep and powerful
18 mei 2020 - Gepubliceerd op Amazon.com
Geverifieerde aankoop
i liked the many views of one of the harshest experiences in our time. its imagery challenges our world and our actions in it
Meer lezen
Vertaal recensie in het Nederlands

Michael O'Driscoll
5,0 van 5 sterren Thus book is incredible, but damn it, I wish there was no need for it to be written
26 mei 2020 - Gepubliceerd op Amazon.com
The stories contained within are heartbreaking and simultaneously made my blood boil at the fact that the situations described in the book shouldn't be happening in the first place. Thank you Mauricio, for making this happen and spotlighting what's wrong at the Mexico/US border...and what's wrong with the mentality of the people who are currently in the seats of power. I hope this book catches the attention it deserves and that this crisis will end. Please keep me in mind for future anthology projects, as I would love to contribute to raising awareness to these injustices.
Meer lezen