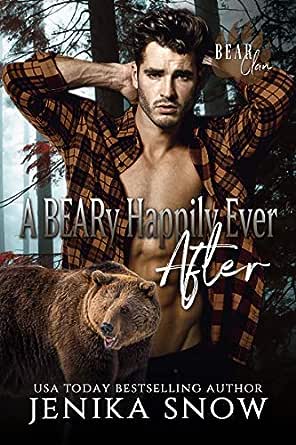 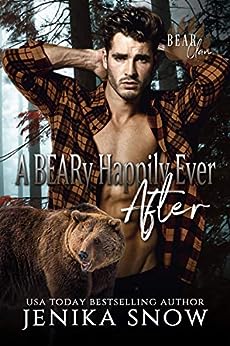 A BEARy Happily Ever After (Bear Clan, 6) (English Edition) Kindle-editie

*Each story in the Bear Clan series can be read as a complete standalone.

An alpha, bear-shifting virgin who was saving himself for his mate. That’s what I was. And I was fine with that, because saving myself for the one female who was meant to be mine was the only thing I ever wanted.  A lone bear without a mate was a depressing thing. And even though I knew she was out there—the other half to my soul—I was beginning to think there was no happily ever after for me.

Until I saw another male lusting after her. There was no way I could control myself. She was mine, and if that meant kicking the ass of the man who wanted her… then so be it.

Rue would be mine.

It started with a swim in the lake, and then suddenly there was a possessive bear shifter tackling my friend to the ground for touching my hair. It ended with me being pressed up against a tree, staring into the dark eyes of a feral man who claimed I was his mate… that he wouldn’t stop until I was his, until I was marked as his.

And as much as I knew being mated to Damon meant my life would be forever changed, knowing he would never let me go, would scare off any male who even looked in my direction, all I wanted was to be with him.

All I wanted was to wear his mark.
click to open popover

K. Lindtvedt
4,0 van 5 sterren A Perfect Read for Growly, Possessive Alpha Lovers...
10 december 2019 - Gepubliceerd op Amazon.com
Geverifieerde aankoop
"A BEARly Happily Ever After" is the sixth and last installment in Jenika Snow's, Bear Clan series. It's the mating story of Mason and Rue. And unlike all the other books in the series, this one is less predictable, starting off with a violent BANG, and continuing at an emotional speed just as intense.

Here, Snow focuses on the mental state and actions of remaining brother Mason, the last to find his mate. She sets a faster emotional pace for this book. Setting a more desperate tone and inlaying a larger sense of trepidation and need. She plants in your gut right from the first chapter a sense of worry about how insane Mason will become after seeing Rue for the first time. It is a level of possessive ferocity unseen in the other five installments, and a welcome and exciting emotional ramp-up.

My only complaint about this one, is the lack of resolution with Rue's friend and family. Considering how this book starts, and the fact that Ronnie hints at Mason being mated, I was expecting to see at least some sort of conclusion tying up these sentiments, as well as, incorporating Rue's parents into the new clan as was done with Mena's parents in book five.

Despite my need for the literary lose ends to be tied, this final addition to Snow's Bear Clan series is a wonderful, rough and tumble, angst-fest, full of the gruff, obsessive, more feral natured alpha I've come to love from Snow. The mating bond scenario written here is gloriously aggressive in all its, "you are mine and only mine" possessive glory!

Another wonderful Jenika Snow short story. And a perfect read for lovers of the genre.

Ashley A. Carr
5,0 van 5 sterren Damon and Rue
5 november 2019 - Gepubliceerd op Amazon.com
Geverifieerde aankoop
I’m so sad to see this series come to an end. Damon sees his brothers getting their mates and he is left wondering will he be the odd man out. But finally gets his mate in Rue. Instant everything but well worth the read. Damon finally gets his HEA with Rue so now his and his brothers families are complete. I can’t wait to see what this author has in store for us next!!
Meer lezen
2 mensen vonden dit nuttig
Vertaal recensie in het Nederlands

Lilu
4,0 van 5 sterren Close...
6 november 2019 - Gepubliceerd op Amazon.com
Geverifieerde aankoop
I liked reading this book. But, there were a few things that just made me shake my head. It missed a few very important details, and then the skipping right over to something else, to the point l had to turn back the page to see what I missed. Couldn’t miss what wasn’t there. It could have been.
Meer lezen
Een iemand vond dit nuttig
Vertaal recensie in het Nederlands

Sydney M Neblett
4,0 van 5 sterren Out of the woods he came
5 november 2019 - Gepubliceerd op Amazon.com
Geverifieerde aankoop
This book is the perfect ending for this series. I didn’t think it was possible, but the author made this book even more intense than the rest. The book has that instant love we crave and, in just a short number of pages, the HEA we always hope for. I especially enjoyed the epilogue, it gave us a little glimpse into the future of this mated couple. I don’t know what it will be, but I’m looking forward to the next book by this author.
Meer lezen
Vertaal recensie in het Nederlands