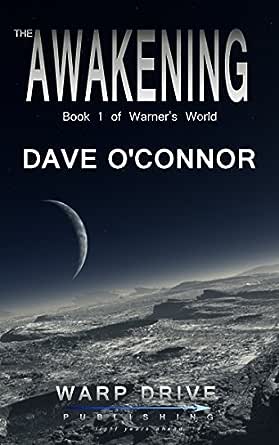 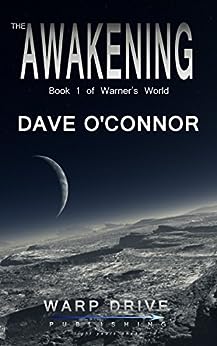 Dave Warner is the right person at the right place at the right time. He just doesn't know it yet. It's 2512 and he's had no time to grieve for his wife and children killed in the first nuclear strike of a civil war between the Federation and Alliance. He commands the Federation frigate, Hermes, and is deep in enemy space on a mission to rescue his best friend who has vital intelligence about the start of the war.

Trouble is they've been betrayed, ambushed and suffered losses. Now his crew are beginning to doubt his judgement. What Dave doesn't know is that he's about to go on a roller coaster ride of events that will give him a new chance at love and transform him from the spiritual warrior into the reluctant hero. Humanity is about to get a new legend.

The Awakening is the first of Dave O'Connor's Warner's World series of sci-fi books set in the 26th Century. Warner's World blends the genres of military sci-fi, space opera, adventure and romance. While the canvas gets bigger with each book in the series, the focus remains very much on the characters, their experiences and how they feel, think and respond to the events they are part of. These are not slow paced books devoted to intricate and evocative descriptions. Rather these are full of action, pace, rhythm and dialog. There is just enough description to provide a framework for the reader's imagination. In that sense this series is a partnership between you and the author.

Each book focusses on one or more themes and these are explored from different angles through the prism and perspective of the many characters. In The Awakening, we explore courage, trust and love.

The scope of the story broadens throughout the series. So too the cast of characters grows. But in each book the core set of characters are explored in increasing depth as they grow and develop. There are some really strong female leads. Yes misogyny is dead in the 26th Century!  But thankfully sex and romance are still alive and well. A galaxy without love and hope is too bleak to contemplate.

As in all war, there is plenty of death and dying. This is not a sugar coated portrayal or a boys own adventure. Characters of all persuasions are subjected to the rigors of war. Characters you grow to love may not survive, while others you loathe seem to escape their karma.

This is not a "futurist" expose. We have warp drives, right? While the author doesn't let a fact get in the way of a good story, he does bring his own penchant for simulation to create as realistic a portrayal of future warfare as he can within the construct of science fiction. This includes a particular focus on the role of artificial intelligence in command decision making and the use of droids.

Check out Dave's Blog on Warp Drive Publishing's site (warpdrivepublishing.com) for more background and news. The site also has more details on the rest of the books in the series. Don't forget to register for your free copy of the Warnerpedia reference so you can keep track of the characters, things and places in Warner's World. If you have a question, please go to the Forum on Warp Drive Publishing.
click to open popover

mariandavid
5,0 van 5 sterren Solid military far distant sci-fi
17 januari 2016 - Gepubliceerd op Amazon.com
Geverifieerde aankoop
Excellent: An absorbing (and strangely romantic) vision of inter-species warfare in the distant future. Yes the usual minor glitches of grammar and spelling that might distract some but certainly not of significance. Some might be jarred by the short chapter format but I found it matched both the multiple character viewpoint and the need to contrast the action versus the waiting phases characteristic of modern warfare which the author has assumed will apply in space. Some might sneer at the number of sexual encounters, suggesting that that would be impossible in a military service - but this is speculative fiction and in an age of female naval captains, artillery commanders and fighter pilots who is to say what the norm would be in a millenium. I look forward to reading his later works.
Meer lezen
Vertaal recensie in het Nederlands

Sigwolf
4,0 van 5 sterren Nice first effort
20 oktober 2015 - Gepubliceerd op Amazon.com
Geverifieerde aankoop
Nice first effort, and very interesting storyline. I enjoyed the action and military aspects the most, but the political aspects were also intriguing. I didn't have a problem with the romance angle, and thought it added to the story when used properly, but it did seem a little much when it seemed every main character had to be hooked up with another.

The writing was a bit uneven at times, and the main character was referred to by his full name way too often, but the story was interesting throughout. Most importantly, I enjoyed it enough that I am anxiously awaiting the second volume.
Meer lezen
Vertaal recensie in het Nederlands

Terry L
5,0 van 5 sterren A good read.
22 oktober 2016 - Gepubliceerd op Amazon.com
Geverifieerde aankoop
This is an interesting read from beginning to end. There is plenty of battle action - both in space and on the ground - and the characters are well developed.
Meer lezen
Vertaal recensie in het Nederlands

Ronnie Craven
5,0 van 5 sterren Fast paced and a little different.
29 september 2015 - Gepubliceerd op Amazon.com
Geverifieerde aankoop
Well, I get sick of everything being the same in any given genre, so I liked this, because it's not the same at all. The best way I could describe it is that it's kind of nostalgic - it harks back to a kind of moral world that might have existed in the fifties, I think, and by doing that - both in the characterisation and the way the plot is structured - it manages to avoid the central clichés of the sci-fi genre that we've all got very used to. So it doesn't read like a Hollywood sci-fi film, for example. On the other hand the pace is fast and the military engagements are given in a stripped-down style that matches the action, the author being careful not to force feed all those standard sci-fi vistas to the reader. The action sequences read realistically, as if written by someone with some military experience. I really got into it and enjoyed it as something a little different.
Meer lezen
4 mensen vonden dit nuttig
Vertaal recensie in het Nederlands

Tim Verseput
3,0 van 5 sterren Good action both in space and on the ground
29 oktober 2015 - Gepubliceerd op Amazon.com
Geverifieerde aankoop
Good action both in space and on the ground. The relationships seemed forced and to quick to develop. Character development was a good start but still needed more depth. One big flaw seemed to be the lack of discussion around a "first contact" with a new species which was first non-humanoid no less, this interesting fact was treated with very little interest or comment.
Meer lezen
Vertaal recensie in het Nederlands
Ga naar Amazon.com om alle 10 recensies te bekijken 3,6 van 5 sterren
Terug naar boven
Over ons
Verkoop bij ons
We helpen je graag
© 1996-2020, Amazon.com, Inc. en dochterondernemingen