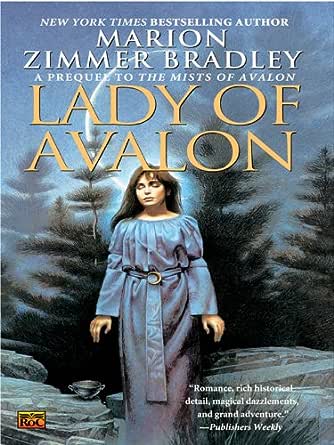 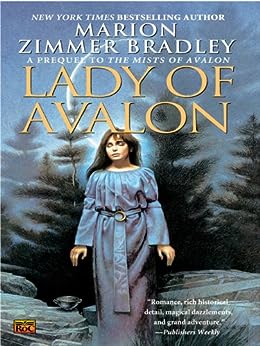 Journey to a time before King Arthur in this prequel to The Mists of Avalon—a spellbinding story of three remarkable women who alter the fortunes of Roman Britain as they fight to reclaim the magic and traditions of a once glorious past.

Caillean, the young priestess fated to become Lady of Avalon, who rescues and raises the orphaned Gawen—heir to a mystic and dangerous royal line...Dierna, who must use all her strength, wisdom, and love to guide Avalon through treacherous political waters and veil the island from a hostile world...Viviane, Lady of the Lake and keeper of the Grail, destined for true greatness as she prepares Avalon for the coming of a legendary king...

Kindle Customer
5,0 van 5 sterren Lady of Avalon....
4 augustus 2016 - Gepubliceerd op Amazon.com
Geverifieerde aankoop
Pretty much picking up where "The Forest House" left off, this is a three part book. Starting with Eilan's son, Gawen, through to the time of Vivianne. It gives you the back story of how the mists came to be around Avalon, how the line of descendant came to be in Avalon and the roll Avalon took in molding Britannia into what it wouldn't eventually become in "The Mist's of Avalon". I found this to be a very welcome addition to the Avalon series.
Meer lezen
8 mensen vonden dit nuttig
Vertaal recensie in het Nederlands

Katherine
5,0 van 5 sterren Religious but not
30 augustus 2018 - Gepubliceerd op Amazon.com
Geverifieerde aankoop
For those who think there is only one religion and it is theirs, think again. Worship of a guiding power has been sought in all ages and is sought now and will be forever as men seek leadership from one who is stronger and wiser. This is as it should be. All men are flawed, but men seeking leadership from the power of good, are destined to lead the flawed to a better life and to a better world for all.
Meer lezen
3 mensen vonden dit nuttig
Vertaal recensie in het Nederlands

wyogrl
5,0 van 5 sterren Another great book from MZB
9 oktober 2019 - Gepubliceerd op Amazon.com
Geverifieerde aankoop
Another great read and intriguing look at ancient history of Roman conquests and ancient Brittany history and folklore. It really makes you think what if and she describes everything in such great detail that it seems like you are there with the characters. Her books are always well written and make your imagination run free and you start to believe more and more in the power of the ancient ones that worshiped at places like Stonehenge and other places being discovered in Europe,Iceland and Greenland.
Meer lezen
Een iemand vond dit nuttig
Vertaal recensie in het Nederlands

John Hanley
3,0 van 5 sterren Mediocre
25 februari 2018 - Gepubliceerd op Amazon.com
Geverifieerde aankoop
While I did read to the end, I felt the story was rife with repetition the the point of the tale seemed lacking in substance as did the tale itself. More than once I found myself skipping ahead to get past portions that seemed totally predictable and at least in my view, lacking in purpose! I realize the author was attempting to introduce a moral to the story but in my opinion at least failed to accomplish the purpose! I hope to choose my next read with more care!
Meer lezen
Vertaal recensie in het Nederlands

Diane Schirf
2,0 van 5 sterren Squanders rich material, potential; a disappointment
30 juni 2008 - Gepubliceerd op Amazon.com
Geverifieerde aankoop
Lady of Avalon by Marion Zimmer Bradley picks up where The Forest House ended. Avalon has been established under the leadership of high priestess Caillean in the shadow of the holy Tor and close to the Christian brotherhood at Inis Witrin. The first book follows Eilan's son Gawen and his contribution to Avalon, the second establishes Avalon's active role in the politics and future of Britannia, and the third focuses on characters familiar to Arthurians--Vortigern, Vortimer, Viviane, and Taliesin and the Merlin of Britain.

Although the mythology and history are rich, the material is squandered in these nearly plotless, barely connected stories. While Avalon tries to preserve the degenerated wisdom that remained when Atlantis sank into the ocean, the world is being torn apart by the oppression and instability of empire and waves of barbarian invasions. Caillean, Gawen, and the daughter of the fairy queen, Sianna, save Avalon, then their successors extend its influence outward to manipulate kings, princes, and military leaders. In spite of the sacrifices and losses, Britannia seems no better off; Rome clings to it, and the barbarians keep coming. There are important victories, but they seem contrived when the goddess is called on to frighten off the Saxons, and they do little more than provide a break in the onslaught. The plots are so minimal and the useless details so many that it's not clear to what extent Britannia's rebelliousness and vulnerability contributed to Rome's decline and fall.

The goddess religion of Avalon is murky at best. Unlike in The Mists of Avalon and The Forest House, the magic here is unquestionably real; the visions are not drug-induced hallucinations, and priestesses invoke the goddess to deter the enemy. The "ancient wisdom" seems to be centered on the power of the earth (focused along leys), the seasons, and reincarnated souls like Gawen, Sianna, Dierna, and Carausius. Practice of the religion is as ordered and artificial as the rule of Rome, with strict rules and elaborate rituals that owe more to the human predilection for control than to the concept of nature and the earth. Even the most natural of emotions and acts, love and non-ritual sex, are forbidden. Young men and women are drawn to Avalon, but their passion is poorly articulated, especially when they cannot know the mysteries revealed during training and initiation. There is nothing special about the character or intelligence of the many of the Druids and priestesses called to Avalon; why are they singled out to preserve the ancient wisdom and mysteries?

While the plots and the secondary characters are weak, the real problem is that so many of the primary characters are selfish and unlikable. Gawen, the "Pendragon" and "Son of a Hundred Kings," from beginning to end is unremarkable, displaying predictable rebelliousness and nobility at the expected moments. He is so susceptible to suggestion that "the priest's words had tainted the Druid ways as well." Dramatically and childishly, he exclaims, "You both want to possess me, but my soul is my own! . . . I am leaving to seek my kin of Rome!" His soul mate, Sianna, has no more personality than Waterwalker, whose role is to pole the Avalon barge. High priestess Dierna does not seek the obvious path, proving the fairy queen's point: "But I do not know what the purpose is, exactly, and if I did, I would not be allowed to speak of it; for it is often in working for or in avoiding a prophecy that people do the very things they should not." We are told that Teleri, who is weak, pliant, and passive, is destined to become high priestess of Avalon; why would the goddess, the Druids, and the priestesses choose someone so unsuitable for such a position? At her worst, high priestess Ana is egotistical and petty, especially with regard to her daughter, Viviane. Is it Ana or the goddess who says, "I would gain nothing. I already have everything."? For reasons that are never explained, the enigmatic fairy queen insists that her daughter become a priestess of Avalon, and it is her line whose members impose their will on events rather than that of the goddess, proving their human side stronger than their role as conductor of magic. Of all the major characters, only Caillean, Taliesin, and perhaps Carausius are likable, revealing both human weaknesses and a greater wisdom. Although it is strongly hinted that Carausius is a reincarnation of Gawen's soul, they are different enough that it raises the question of what these souls are and why only certain ones return again and again, while others are "once born." The whims of the god and goddess, as channeled through these souls and through the Druids and priestesses, appear to be as illogical as those of any human.

Without a solid plot driven by strong, sympathetic characters, Lady of Avalon lacks the touches of historical and magical drama that made The Forest House at least interesting. Although the novel reveals some of the reasons for the decline of Avalon and the goddess religion, Lady of Avalon adds little essential to The Mists of Avalon.
Meer lezen
9 mensen vonden dit nuttig
Vertaal recensie in het Nederlands
Ga naar Amazon.com om alle 110 recensies te bekijken 4,4 van 5 sterren
Terug naar boven
Over ons
Verkoop bij ons
We helpen je graag
© 1996-2020, Amazon.com, Inc. en dochterondernemingen