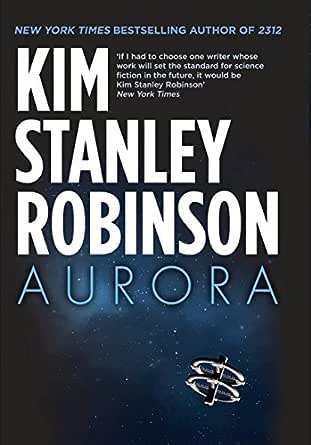 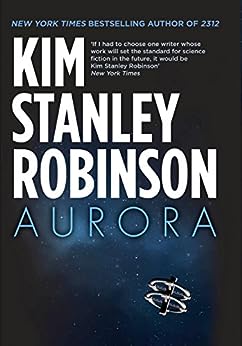 'Aurora is a magnificent piece of writing, certainly Robinson's best novel since his mighty Mars trilogy, perhaps his best ever' - Guardian

Our voyage from Earth began generations ago.

Now, we approach our destination.

Brilliantly imagined and beautifully told, Aurora is the work of a writer at the height of his powers.

'An accessible novel packed with big ideas, wonders, jeopardy and, at the end, a real emotional punch' SFX

Now in paperback, this is the latest epic space opera from the author of }2312, Shaman{ and the acclaimed }Mars{ trilogy. It tells the story of mankind's first voyage beyond the solar system in search of a new home. '}Aurora{ is a magnificent pice of writing... perhaps his best ever' Adam Roberts, }Guardian
Alle bekijken

Joe R
4,0 van 5 sterren Awesome and Depressing
15 oktober 2015 - Gepubliceerd op Amazon.com
“Aurora” is probably the closest Kim Stanley Robinson has come to the feel of his Mars trilogy. As in “Red Mars”, KSR takes his own approach to a classic SF theme, in this case, the colonization of a planet outside our solar system using a multi-generational starship. In many ways, there is no writer on Robinson’s level for such a story – at least, I have never experienced anyone else who has examined both the scientific and social challenges in such a thorough and logical manner. This is as “hard” as hard science fiction can be, and loaded with fascinating explorations of topics ranging from the Fermi Paradox to the nature of prions. There are no “deus ex machina” surprises in the form of warp drives or alien civilizations – everything is believable and logical – coldly logical, in fact.

I enjoyed “Aurora” more than any other book Robinson has written since the Mars series. The style and pacing has been criticized by some, but I found the framing (the story is narrated by the starship’s computer) valid and certainly much more readable than a lot of recent experimental styles.

(Spoilers Below)
In truth, I enjoyed the first half, maybe two-thirds, of “Aurora”, but the last third was so depressing that I believe it actually made me feel moody throughout the days I finished the book. I don’t usually like to spoil in a review, but this book takes such a turn that I feel disclosure of its nature is necessary. First, the book is mistitled, as “Aurora” is the name of the planetary body the colonists attempt to settle. That implies the story focuses on that place, but in fact, less than 10% of the book involves it. A more apt title for this book would be, “The Failed Mission to, and Attempted Return from, Aurora”. An even better title might be, “Two Thousand People Leave Earth and Die”. Here’s a summary:
1. 2,000 people in a generational starship reach a planet they name Aurora.
2. 200 of those people go to the planet’s surface, which seems highly promising for colonization.
3. An unidentified infectious agent on that planet makes them sick, and about 100 of them die on the planet.
4. Another 100 try to return to the starship, and the people aboard kill them.
5. The people still on the starship fight each other about what to do, and some kill each other.
6. About half the remaining people stay in the new system to try to establish a colony anyway. The book never relates any more information about them except to say that they failed and died.
7. The other half decide that space colonization is a terrible idea and try to return to Earth.
8. Their starship starts failing on the voyage, a famine strikes, some people starve and some commit suicide.

I actually think that in KSR’s first draft of “Aurora”, at this point the famine and system breakdown progressed and killed the remaining voyagers and his book / humility lesson ended here. If so, his editor made him add a *slightly* less depressing ending. He inserts an uncharacteristic “technological savior” in the form of human hibernation, and from this point ignores the points he had made about hyper-evolved bacteria damaging the ship’s mechanisms, so I truly wonder at this turn. So:
9. The starship’s AI puts the remaining survivors into hibernation and flies them back to Earth.
10. Some people die during hibernation, some die upon awakening.
11. About 600 people land on Earth, though some – you guessed it! – die during reentry.
12. The survivors keep dying after landing on Earth. The rest feel their lives are pointless. Oh, and the starship’s AI itself tries to reach a stable orbit but fails and crashes into the sun.

Now, I don’t need all stories to be unrelenting optimism and tales of the inevitable, easy, human conquest of the galaxy. The trials and challenges, especially when supported by serious scientific analysis and speculation (which KSR does superbly), make a story stronger. I’m certainly not unhappy that I read “Aurora”, and I recommend it – to people who know its dark perspective and want to consider it. Just understand that this book is essentially “Anti-Science Fiction”, as Robinson seems to be on a mission to debunk all the Heinleinian / Asimovian tales of space colonization. This is really apparent when, near the end, he adds – almost spitefully - that not only did the colony attempt that remained in the Aurora system fail, but that Earth had sent out many other starships attempting to colonize other star systems, and they ALL failed, too!

The book ends with an odd-feeling section on Earth in which Robinson expounds on humanity’s abuse of the homeworld’s environment, and even says that the belief in space colonization contributed to people taking Earth for granted. It seems as if one of the most respected science fiction writers of his time is disavowing the genre, even pointing a finger at hopeful speculation as harmful.
Meer lezen
220 mensen vonden dit nuttig
Vertaal recensie in het Nederlands

Kindle Customer
1,0 van 5 sterren This is not a novel about the colonization of a distant planet
27 mei 2016 - Gepubliceerd op Amazon.com
Geverifieerde aankoop
I've thought a lot about this book since I read it a couple of weeks ago--mostly about how very much I did not like it. I think maybe what really upset me most was just how mislead I felt by the book.

It is not a spoiler to say that this is not a novel about the colonization of a distant planet. It is a polemic against the very idea that humanity should ever colonize a distant planet. I mean the novel approaches the issue with such passion and really beats us over the head that you'd think this was one of the pressing issues of our time and that we were constantly sending these multi-generational ships out into interstellar space. Everyone in the novel who favors interstellar colonization is a moral monster and everyone who opposes it is a good and decent person. Really. It's very strange.

If you are interested in a novel about the struggles involved in colonizing space, that really grapples with the science and technology this is not the novel for you. Look elsewhere.

So by about 1/3 of the way through the book it is quite clear that the bulk of the story will not be about the colonization of Aurora, but about a return journey to Earth, which to me has no drama whatsoever and seems pointless. Had I known this I never would have picked up this book.

Much of what is wrong with this novel has been covered in other negative reviews, but I do want to get my 2 cents in. Here are some points:

* The colony ship left Earth in the 26th century, over 500 years in the future. Much of the technology on the ship demonstrates this. You've got printers that can print any complex object, a big ship that can travel to another solar system and keep 2000 people alive for nearly 200 years, a sentient AI. But much is missing. No mention is made of genetic engineering, which is very odd.
* Much is made in the novel of the zoo effect, or the small island effect. This is the idea that a small population will degrade over time due to--well what exactly is never said. This is a key concept of the novel. Colonizing a distant world is impossible because of this zoo effect but we never get any kind of explanation of exactly what this is or what causes it.
* OK and if the zoo effect another way of saying a lack of genetic diversity--well there are simple ways of dealing with that. See genetic engineering mentioned above. But also, it is possible with current technology to freeze sperm, eggs, and live embryos of pretty much any species for many years. Why did these geniuses not load up the ship with genetic diversity in the form of such things? This really bothered me a lot.
* At one point the people on the ship are starving because their crops are failing. Yeah, they grow crops on the ship. This seemed interesting at first (the growing of crops, that is) but when it got to the point where everyone was starving, well it just seemed stupid. Food is basically certain chemicals arranged in a particular way. It just seems that 500 years in the future there is bound to be a way to create food in a closed system like an interstellar ship that does not involve tilling soil. See genetic engineering mentioned above. Plus, more importantly, as I mentioned, the ship has printers that can print literally anything. Yet no one thinks to ask if said printers can print food for goodness sake.
* This may be me just wanting to read a different book, but these people gave up very quickly. After having lived their entire lives just to get to a distant planet, once they made it (a miracle of ingenuity and technology and hard work), at the first sign of trouble everyone gives up and we are supposed to think that this is the only logical thing they can do. I don't know. We in America are raised to revere the founding fathers. I find it impossible to believe that everyone on a multi-generational ship (if such a thing existed) would not be raised to revere the founders of their mission, to be taught from birth that they are special because their life has a purpose. Everyone would not be so quick to give up when said purpose proved to be a little difficult.
* The group on the ship that decides to return to earth knows that the return journey will take 170 years, so they will all be long dead by the time the ship gets there. So what is the point of returning. They say it is so their ancestors can return to earth, which is just plain silly. They decide to take half the mission's resources and the mission's very valuable AI and half the mission's population away essentially so that they can all feel less guilty about having children. Think about it.
* And one final point (leaving out so much more that I could complain about). So through some nice hand waving (that takes about 150 pages or so) our group of returnees is actually able to make it back to earth while they are mostly still alive. OK, whatever. SF magic to the rescue. To what end you may wonder. Well, so that the main character can go body surfing with some naked hippies back on earth. No I am not kidding. The last 30 pages (30 pages!) of the novel are the main character body surfing with naked hippies. I skimmed most of that section thinking, no, no, surly not. Surly we're not going to just have body surfing till the final page. But yes, yes we did. That whole section of the book was an embarrassment.
Meer lezen
161 mensen vonden dit nuttig
Vertaal recensie in het Nederlands
Ga naar Amazon.com om alle 748 recensies te bekijken 3,6 van 5 sterren
Terug naar boven
Over ons
Verkoop bij ons
We helpen je graag
© 1996-2020, Amazon.com, Inc. en dochterondernemingen