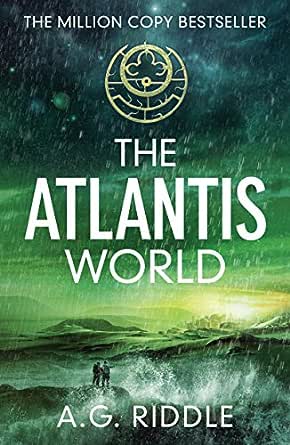 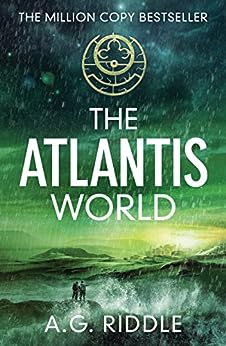 A mysterious signal from deep space could be humanity’s last chance of survival. And reveal the ultimate secret of our origins.

The Atlantis World is the third book in THE ORIGIN MYSTERY, a trilogy that has sold over THREE MILLION COPIES worldwide.

Northern Morocco: Dr. Kate Warner cured a global pandemic, and she thought she could cure herself. She was wrong. And she was wrong about the scope of the Atlantis conspiracy. Humanity faces a new threat, an enemy beyond imagination. With her own time running out and the utter collapse of human civilization looming, a new hope arrives: a coded message from a potential ally.

Arecibo Observatory: Mary Caldwell has spent her life waiting, watching the stars, looking for signs of intelligent life beyond our world. When that day comes, Mary is thrust into a struggle older than the human race, with far greater stakes. She must decide whom to trust because there is nowhere to hide.

Antarctica: In the wake of the Atlantis Plague, Dorian Sloane finds himself a puppet to Ares and his mysterious agenda. When Dorian moves to take control of the situation, Ares unleashes a cataclysm that changes everything. As the catastrophe circles the globe, Ares reveals the true nature of the threat to humanity, and Dorian agrees to one last mission: find and kill David Vale and Kate Warner. There will be no prisoners this time. The orders are seek and destroy, and Dorian has been promised that his own answers and salvation lie on the other side.

With Dorian in pursuit, Kate, David, and their team race through the ruins of the Atlantean ship left on Earth, across Atlantean science stations throughout the galaxy, and into the past of a mysterious culture whose secrets could save humanity in its darkest hour. With their own lives on the line and time slipping away, Kate, David, and Dorian are put to the ultimate test.

“...reads like a superior collaboration between Dan Brown and Michael Crichton.”
-- The Guardian on PANDEMIC

“I finished the book fast because I just couldn’t wait...”
-- GeekDad on DEPARTURE

“Riddle (The Origin Mystery trilogy) makes an effort to keep the focus on how his characters react to each other (including to their future selves) rather than to the technological marvels that reshaped their world.”
-- Publisher’s Weekly on DEPARTURE

“Well-constructed and tightly-wound as a fine Swiss watch- DEPARTURE has non-stop action, an engaging plot and, of course, wheels within wheels.”
-- Diana Gabaldon, bestselling author of Outlander on DEPARTURE

“This is apocalyptic sci-fi at its best.”
-- Daily Mail on The Solar War


ABOUT THE ATLANTIS WORLD

The Atlantis World is an adventure across space and time that explores the history of the Atlantean homeworld and culture, a topic readers have asked about since the release of the first novel in the series, The Atlantis Gene. Fans of Dan Brown, Michael Crichton, Preston and Child, Robert Masello, and James Rollins are raving about the trilogy, giving it over 25,000 reviews on Amazon and nearly 100,000 ratings on GoodReads. This heart-stopping thriller is the third and final book in A.G. Riddle’s Origin Mystery Trilogy, which is now complete.

A.G. Riddle’s novels have sold over four million copies and been published around the world in twenty languages. Several movie studios have optioned his work, including Twentieth Century Fox (Departure) and CBS Films (The Origin Mystery). When he’s not writing, he can be found reading a book, mountain biking, or chasing his two-year-old daughter around the house yelling, “Stop! What do you have in your mouth?”

A high-concept thriller trilogy which took the US by storm. 70,000 years ago the human race almost became extinct. Now it faces the next stage of evolution. Will we survive this time?

Chad Cloman
3,0 van 5 sterren All questions are answered
4 november 2017 - Gepubliceerd op Amazon.com
Indeling: Kindle-editieGeverifieerde aankoop
This third book in the series is a radical departure from the first two novels. In it, we get all the answers. We learn about the Atlanteans and their destruction. We learn about Ares and his long-term goal to destroy those who wiped out the Atlanteans. We learn about Isis, the Atlantean researcher who saved humanity 70,000 years ago and began altering our genetic code.

Human civilization is still reeling from the massive flood unleashed by Ares and is not much of a factor in the story.

Throughout the book, Dorian Sloane (the embodiment of Ares) is chasing Kate Warner (the embodiment of Isis) and David Vale to kill them. At each stage in the pursuit, we learn more about the Atlanteans and the enemy that destroyed them. A new faction, the Exiles, also appears.

While it's nice to have all the mysteries resolved and all the pieces of the puzzle revealed, most of the book is pretty much just a replay of the Atlantean memories of Ares and Isis. Sure, there's the ongoing chase between Dorian and Kate/David to add a bit of tension, and there's the climax where Ares' plan against the Serpentines comes to fruition, but in my opinion it isn't really that good of a book. Obviously you have to read it to get closure on the series, but... bleah.
Meer lezen
20 mensen vonden dit nuttig
Vertaal recensie in het Nederlands

Denise
2,0 van 5 sterren Wish I had stopped at The Atlantis Gene...
6 april 2017 - Gepubliceerd op Amazon.com
Geverifieerde aankoop
Oh brother...while I was disappointed with book 2 of the Origin series, I completely hated this one. I nearly stopped listening to the audio book several times but figured I was so far invested in the series I needed to at least see it through...sorry I did. I only gave this book a 2 because the reading in the audio book version was still very good.

This entire story in book three is seemingly likened to civil war stories between the Atlantians and all other alien and human life forces. It got real boring REAL quick. Where book 2 was disappointing, book 3 was barely tolerable. If you've read book one and book two, you'll remember that in book one the alien space ships had suspension/stasis tubes that healed and kept the inhabitants in suspension for hundreds to thousands of years and they awoke at the same age, just different times...in book 2, the tubes became resurrection/cloning tubes with varying outcomes for the inhabitants from multiple cloning of dead people/aliens to people exiting the tubes with just the memories of other dead aliens...in this book the memories are killing their hosts so our main characters traverse the galaxies via ancient spaceships, portals and worm holes. Too laughable to even comprehend...this goes on and on and ON... Interestingly enough, the humans in the group seem to have no adverse effects from space travel...no need for oxygen or any special protective equipment...they just pass from one spaceship, planet or space station through an alien portal and enter another. No harm, no foul.

Oh, and in case you're wondering...Kate's presumed dead infant that she discovers is alive in book one, is never mentioned in book two...is once again mentioned in this book...briefly at the very end! No effort to find her own infant but a lot of effort to find missing memories of the alien whose partial memories were "cloned" into her. Seriously...
Meer lezen
14 mensen vonden dit nuttig
Vertaal recensie in het Nederlands

Rebecca
2,0 van 5 sterren Interesting concept but needs a good editor
11 januari 2018 - Gepubliceerd op Amazon.com
Indeling: Kindle-editieGeverifieerde aankoop
I know that this series is promoted as a million copy bestseller, and I purchased it based on that. Even though there is an interesting premise, the execution makes this for choppy, bordering on boring, reading. The author spends both too much time and too little time fleshing out the characters and ends up with a mish mash and me losing interest. The main characters have both their current selves as well as memories from past selves and this device gets old in a hurry. Also, the love of history on the part of the author is commendable, but when the characters break into history lectures in the middle of an action scene it breaks the flow of the story. I plowed through the whole series because I paid for it, but wish the author had a good editor who would have cut this convoluted tale down to one interesting volume. I do appreciate the lack of crude language and scenes.
Meer lezen
10 mensen vonden dit nuttig
Vertaal recensie in het Nederlands

DiL
3,0 van 5 sterren Good thing I had read Departure first
4 februari 2015 - Gepubliceerd op Amazon.com
Indeling: Kindle-editieGeverifieerde aankoop
A slight improvement on the second novel, this third installment picks up the pace. The plotting moves very fast with many twists and turns, but every reveal just becomes more ridiculous. At each step, whatever the dilemma, every fix or solution is formed and executed unbelievably fast. There's also very little time spent on actual world building so any deux ex machina can be thrown in because the novel never establishes what the boundaries are, except for maybe cursory mentions after the fact. It basically just races through the plot to reveal the full mystery. In the end, this trilogy is mildly entertaining but definitely still comes off as an amateur attempt. It's interesting though that A.G. Riddle's next novel, Departure, is a HUGE leap forward in the quality and maturity of the writing. Good thing I had read Departure first, because if I had only read this trilogy, I would have written off this author and never bothered again. But Departure is written with such beautiful maturity that it gives me hope for future novels from Mr. Riddle.
Meer lezen
21 mensen vonden dit nuttig
Vertaal recensie in het Nederlands

ZacWolf
5,0 van 5 sterren This series was well paced from beginning to end, and is a great reimagining of the Atlantis stories!
3 januari 2018 - Gepubliceerd op Amazon.com
Geverifieerde aankoop
For me personally, the third book in a trilogy is what makes or breaks the entire series. Book one and book two can be amazing, but if book three doesn't stand on its own, then it can sour the whole thing.

Fortunately this book did not suffer that fate! The pacing was excellent, and the writing didn't suffer the all too common fate of 3rd book "over-editing" which seems to be so common with other trilogies that start off successfully. Either the author was strong willed enough to keep his publisher's editor "in-check" or his own pacing was so good that it wasn't necessary. So many trilogies suffer with the third book really needing to much longer or broken down into two books, but instead of doing that, the publisher just starts chopping the story to the point that it falls flat on its face.