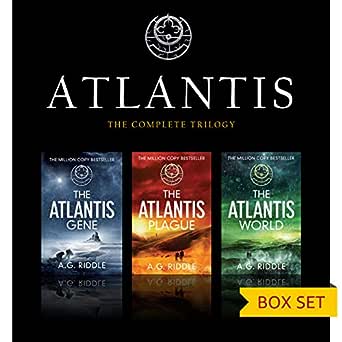 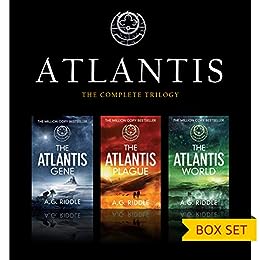 * NOTE: This box set is available for a limited time only *

For the first time ever, get all three books in the Atlantis trilogy in one box set--at over 50% OFF the price of the books together. This box set is almost 1,200 pages in print and will be available to purchase or borrow in Kindle Unlimited for only a short period of time.


About The Atlantis Trilogy

Since the publication of the first volume in March of 2013, the Atlantis trilogy has become a global phenomenon, selling over three million copies worldwide in twenty-three languages. Together, the three books have received 26,000 reviews on Amazon and well over 100,000 ratings on GoodReads. The series has been optioned for film, and the first book in the trilogy, The Atlantis Gene, made the list of the most sold books of the year on Amazon an unprecedented five years in a row (2013, 2014, 2015, 2016, and 2017).

“...reads like a superior collaboration between Dan Brown and Michael Crichton.”
-- The Guardian on Pandemic

“I finished the book fast because I just couldn’t wait...”
-- WIRED GeekDad on Departure

“Riddle... keep(s) the focus on his characters... rather than the technological marvels”
-- Publisher’s Weekly on Departure

“Well-constructed and tightly-wound as a fine Swiss watch--DEPARTURE has non-stop action, an engaging plot and, of course, wheels within wheels.”
-- Diana Gabaldon, bestselling author of Outlander


Description of Book One: The Atlantis Gene

THE GREATEST MYSTERY OF ALL TIME...
THE HISTORY OF HUMAN ORIGINS...
WILL BE REVEALED.

70,000 years ago, the human race almost went extinct.
We survived, but no one knows how.
Until now.
The countdown to the next stage of human evolution is about to begin, and humanity might not survive this time.

Off the coast of Antarctica, a research vessel discovers a mysterious structure buried deep within an iceberg. It has been there for thousands of years, and something is guarding it. Could it be the fabled city of Atlantis? Or is it something more dangerous?

At the same moment, in Jakarta, Indonesia, a brilliant geneticist named Kate Warner has just discovered a breakthrough treatment for autism. Or so she thinks. What she has found is far more deadly--for her and for the entire human race. Her work could unleash the next stage of human evolution. It might also hold the key to unlocking the mysterious structure off the coast of Antarctica.

On the other side of Jakarta, Agent David Vale is racing to uncover a conspiracy with far-reaching implications. But he’s out of time. His informant inside the conspiracy is dead. His own organization has been infiltrated--and his enemy has turned the hunt on him. Now he’s on the run. But when he receives a coded message related to an imminent attack, he risks everything to save the one person that can help him stop it: Dr. Kate Warner.

Together, Kate and David race to unravel a global conspiracy and learn the truth about the Atlantis Gene... and human origins. Their journey takes them to the far corners of the globe and into the secrets of their pasts. Their enemy is close on their heels and will stop at nothing to obtain Kate’s research and force the next stage of human evolution--even if it means killing 99.9% of the world’s population. David and Kate can stop them... if they can trust each other. And stay alive.
click to open popover

Kindle Customer
5,0 van 5 sterren Great tale
16 januari 2020 - Gepubliceerd op Amazon.com
Geverifieerde aankoop
I enjoy a story that grabs you by the lapels and drags you into the adventure. The characters you come to love and or hate and are frequently surprised by what they do. This is one of those stories that keeps me turning the pages. Bottom line is try this author, he is a great story teller.
Meer lezen
Vertaal recensie in het Nederlands

LInda Littman
5,0 van 5 sterren Good book. I need mother into the next in the series. I'm tired and don't feel like writing a book right now. You need to keep the good
29 december 2019 - Gepubliceerd op Amazon.com
Geverifieerde aankoop
books coming out r on the press. This is where I am getting upset and for program from having to write 20 words is upsetting me and your not getting anything that would help you in your writing. I had over 40 words and cannot get the option to save it..
Meer lezen
Een iemand vond dit nuttig
Vertaal recensie in het Nederlands

Kindle Customer
5,0 van 5 sterren A unique apocalyptic story not the same
24 november 2019 - Gepubliceerd op Amazon.com
I actually listened to these on Audible. I was hooked on the first story. The genre of apocalyptic stories are so prolific now it is harder to find a unique one. This series is one of those. You have the mystery of what is going to happen next and why. Well written and interesting.
Meer lezen
17 mensen vonden dit nuttig
Vertaal recensie in het Nederlands