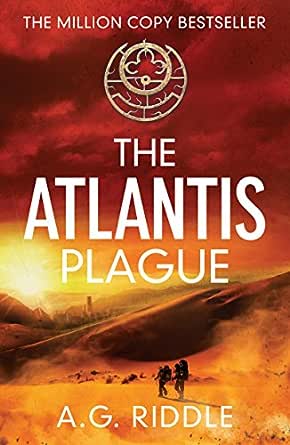 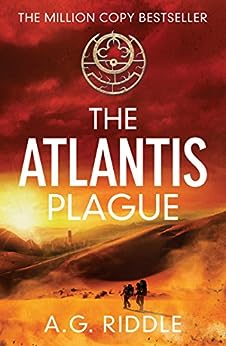 An ancient pandemic returns--and this time, humanity may be altered forever. The race to stop the Atlantis Plague has begun.

The Atlantis Plague is the second book in THE ORIGIN MYSTERY, a trilogy that has sold over THREE MILLION COPIES worldwide.

In Marbella, Spain, Dr. Kate Warner awakens to a horrifying reality: the human race stands on the brink of extinction. A pandemic unlike any before it has swept the globe. Nearly a billion people are dead--and those that the Atlantis Plague does not kill, it transforms at the genetic level. A few rapidly evolve. The remainder devolve.

As the world slips into chaos, radical solutions emerge. Industrialized nations offer a miracle drug, Orchid, which they mass produce and distribute to refugee camps around the world. But Orchid is merely a way to buy time. It treats the symptoms of the plague but never cures the disease.

Immari International offers a different approach: do nothing. Let the plague run its course. The Immari envision a world populated by the genetically superior survivors--a new human race, ready to fulfill its destiny.

With control of the world population hanging in the balance, the Orchid Alliance and the Immari descend into open warfare. Now the last hope for humanity is to find a cure. Kate alone holds the key to unraveling the mystery surrounding the Atlantis Plague. The answer may lie in understanding pivotal events in human history--events when the human genome mysteriously changed. Her journey takes her across the barren wastelands of Europe and northern Africa, but it is her research into the past that takes her where she never expected to go. She soon discovers that the history of human evolution is not what it seems--and setting it right may require a sacrifice she never imagined.

“...reads like a superior collaboration between Dan Brown and Michael Crichton.”
- The Guardian on PANDEMIC

“I finished the book fast because I just couldn’t wait...”
- GeekDad on DEPARTURE

“Riddle (The Origin Mystery trilogy) makes an effort to keep the focus on how his characters react to each other (including to their future selves) rather than to the technological marvels that reshaped their world.”
- Publisher’s Weekly on DEPARTURE

“Well-constructed and tightly-wound as a fine Swiss watch- DEPARTURE has non-stop action, an engaging plot and, of course, wheels within wheels.”
- Diana Gabaldon, #1 New York Times bestselling author of Outlander on DEPARTURE

“This is apocalyptic sci-fi at its best.”
-- Daily Mail on The Solar War

A.G. Riddle’s debut novel, The Atlantis Gene, became a global phenomenon, topping best seller charts in the US and abroad. Every year, Amazon compiles a list of the top 100 bestselling Kindle eBooks of the year (by total sales volume). The Atlantis Gene has made Amazon’s annual Kindle bestseller list an unprecedented five years in a row--every year since the book’s release (2013, 2014, 2015, 2016, and 2017). Since then, Riddle has released eight more novels, selling millions of copies in two dozen languages. His books feature a unique mix of science, history, and suspense that has delighted fans of Michael Crichton, Dan Brown, Clive Cussler, and James Rollins and continues to sell year after year. He lives in Raleigh, North Carolina.

NOTE: this novel is available in a variety of formats: as an eBook on Kindle Fire and Kindle eReader, as an Audible audiobook, and in print (paperback and hardcover). It is also enrolled in Kindle Unlimited where subscribers can read for free.

steve A
4,0 van 5 sterren The series contnues to improve.
29 september 2016 - Gepubliceerd op Amazon.com
Indeling: Kindle-editieGeverifieerde aankoop
The Atlantis series is so intriguing because its central idea, managed evolution of the human race over a hundred thousand years continuing into the present, convincingly seems to have more than a kernel of truth to it. While the writing of the present-day plot elements proceeds at a near chaotic pace, The Atlantis Plague is an improvement over the first book in the series. There had been a break in style between the action portion and the diary-like reminiscences of the discoverer of the atlantean ship, giving the impression of two different writers. In this book, the slower paced sections detailing the coincidence of plagues and evolutionary leaps by mankind are the most interesting parts, and the dizzyingly fast paced action parts seem to simply support that central idea. In other words, the unfolding revelation of mankind's real evolutionary past and future is so original and convincingly presented that the reader is compelled forward through the entire series.
Meer lezen
21 mensen vonden dit nuttig
Vertaal recensie in het Nederlands

Nancy K. Oliver
5,0 van 5 sterren The plague and explanation of origins of humans
22 januari 2019 - Gepubliceerd op Amazon.com
Indeling: Kindle-editieGeverifieerde aankoop
This book covers even more territory than the first in the trilogy, and has flashbacks that explains the beginning of the characters, and goes back even farther to explain the origin of mankind. Hint: It was alien scientists from another planet called Atlantis who were studying many worlds in the universe when they discovered the potential of earth, then found they could never go home because their world was destroyed by an enemy impossible to fight. They aren't the ones who release the plague, but you don't find out who that is or why until the next book. The individual stories from the first book begin to come together in this book, and the story deepens as you learn that many of the characters aren't who you originally thought they were, but that is also explained as people begin to realize how bad this plague really is, and scientists are working furiously to find a way to fight it. Like the first book, you are taken to many different locations with many mysteries that finally come together. Also like the first book, it was a really good read.
Meer lezen
8 mensen vonden dit nuttig
Vertaal recensie in het Nederlands

Denise
3,0 van 5 sterren Sadly disappointed
6 april 2017 - Gepubliceerd op Amazon.com
Geverifieerde aankoop
I truly loved the first book in the Origin series, The Atlantis Gene, but this one fell short for me. The Atlantis Gene had a great plot that twisted research, evolution, creation and alien invasion/technology into a VERY well crafted tale. This book, however, was too silly for my taste.

This book took off with the same interesting characters but really veered off into left field making the story completely unbelievable. Some examples...a small black tile that unfolds outward and upward to create a tent/shelter...okay, not too bad, right? I'd have bought into that idea if the tent/shelter didn't come fully furnished! Complete with beds (linens included), desks, chairs and working showers. Then the suspension/stasis tubes from the first book suddenly become resurrection/cloning tubes...and works differently for different people. Some die outside the tube but are cloned inside the tube...many times over in some cases. Some climb into the tube nearly dead and are resurrected. Some die outside the tube but just their memories are resurrected in someone else inside the tube...come on...pick one and stick with it.

What I think bothered me most with this storyline was that Kate (main character from book one) had a child taken from her at birth and she'd been convinced it had been still born. She finds out at the end of book one that the child survived and was in a research lab far, far away. When the first book ended, your imagination allowed you to believe she went in search of her baby. There was literally no mention of the baby in this book...just a whole lot of hunt and find and cloning and reserrection with the humans, Atlantians and hybrid Human/Atlantians.
Meer lezen
9 mensen vonden dit nuttig
Vertaal recensie in het Nederlands

Chad Cloman
4,0 van 5 sterren Plot advancement, dealing with the plague, not as good as the first book
4 november 2017 - Gepubliceerd op Amazon.com
Indeling: Kindle-editieGeverifieerde aankoop
This second book in the trilogy covers humanity's desperate attempts to deal with the plague released by the Immari in the first novel. The disease is transmitted via a completely new (and strange) mechanism that bypasses all traditional quarantine and containment measures. The Immari have taken over the southern hemisphere and are continuing in their efforts to dominate the entire world and build an army capable of defeating the Atlanteans. Northern-hemisphere countries have a treatment, known as Orchid, that staves off death but does not provide a permanent cure.

Dorian Sloane has been resurrected in the Atlantean facility in the Antarctic and is in touch with a mysterious Atlantean named Ares who has an unknown agenda. David Vale has been resurrected in northern Africa and is masquerading as an Immari colonel. Kate Warner begins at an Orchid facility in southern Spain near Gibraltar and makes her way south toward Africa. Dr. Arthur Janus is an unknown with ties to an elite research team that created Orchid and has the best chance of coming up with a cure for the plague. At the end, we find that he is much, much more important than we knew.

Some pieces of the Atlantean mystery are revealed during this novel. Both Kate and Dorian discover that their time (as children) in the Atlantean resurrection tubes has changed them significantly, made them immune to the plague, and given them fleeting Atlantean memories.