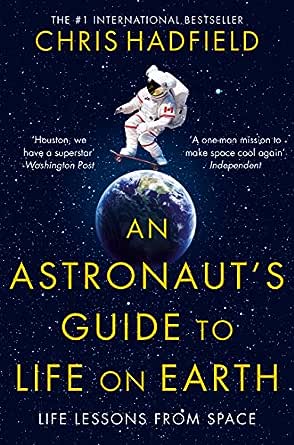 An Astronaut's Guide to Life on Earth (English Edition) Kindle-editie

"A very human glance into a rarified world.... The vacuum of space is unforgiving and brutal. Life on earth isn't easy, either. Mr. Hadfield has genuinely and refreshingly increased our understanding of how to thrive in both places."--The Wall Street Journal

"Hadfield is a genius, a man of science and technology and no first-timer to the universe."--New York Post

"Hadfield proves himself to be not only a fierce explorer of the universe, but also a deeply thoughtful explorer of the human condition, capable of articulating those most universal of inquiries in simple yet profound language.... The book itself is absolutely spectacular."--Brain Pickings

"Lessons from his new book, AN ASTRONAUT'S GUIDE TO LIFE, are so inspiring that it's hard to decide which one to tell you about."--USA Today

"Our planet's one-man ambassador to the universe."--Gothamist

"Thoroughly engaging.... In a low-key style, he makes a persuasive case that the oft-derided Space Station is both a marvel of engineering and a triumph for science, and he paints the cartoon heroism of the NASA astronaut corps in a much more realistic, and yet in many ways even more admirable, light."--Corey S. Powell, American Scientist

"Hadfield is a good writer with an engaging style.... From his photos of Earth from space to his videos showing the daily grind of life on a 100-meter wide orbiting tin can, he is all about real life."--Slate

Back on the earth after three spaceflights, Chris Hadfield's captivating memoir An Astronaut's Guide to Life on Earth reveals extraordinary stories from his life as an astronaut, and shows how to make the impossible a reality.

Colonel Chris Hadfield has spent decades training as an astronaut and has logged nearly 4,000 hours in space. During this time he has broken into a Space Station with a Swiss army knife, disposed of a live snake while piloting a plane, been temporarily blinded while clinging to the exterior of an orbiting spacecraft, and become a YouTube sensation with his performance of David Bowie's 'Space Oddity' in space. The secret to Chris Hadfield's success – and survival – is an unconventional philosophy he learned at NASA: prepare for the worst – and enjoy every moment of it.

In his book, An Astronaut's Guide to Life on Earth, Chris Hadfield takes readers deep into his years of training and space exploration to show how to make the impossible possible. Through eye-opening, entertaining stories filled with the adrenaline of launch, the mesmerizing wonder of spacewalks and the measured, calm responses mandated by crises, he explains how conventional wisdom can get in the way of achievement – and happiness. His own extraordinary education in space has taught him some counter-intuitive lessons: don't visualize success, do care what others think, and always sweat the small stuff.

You might never be able to build a robot, pilot a spacecraft, make a music video or perform basic surgery in zero gravity like Colonel Hadfield. But his vivid and refreshing insights in this book will teach you how to think like an astronaut, and will change, completely, the way you view life on Earth – especially your own.

Megan R McConnell
5,0 van 5 sterren Not your average autobiography
15 oktober 2016 - Gepubliceerd op Amazon.com
Geverifieerde aankoop
I'm a Chris Hadfield fan - I will admit that first up. I bought this because of that initially. However, it was absolutely not what I was thinking it would be. Part motivational, part life lessons, part autobiography, this book is eminently readable and written in easy to read language and easy to digest sentences.

Hadfield gets his message across telling the story of his career as an Astronaut - and what he did to get there. I have to say that from this, now I am absolutely a fan of his wife, who must surely be the most supportive woman around!

Humour flows through the book, but he doesn't gloss over how dangerous situations he has been in were, nor does he gloss over the pain of loosing friends in space missions.

This book will appeal to a wide range of people - from those who want to know what being an astronaut is like (and your eyes will be opened wide - I know mine were) to those looking for a creed to live their life by.

If you enjoyed Chris Hadfield's tweets and reports from the ISS, then I can guarantee you will enjoy this book. There are a heap of photos at the back of the kindle edition of the book (instead of scattered through it) - so don't assume that the last chapter is the end of the book!
Meer lezen
31 mensen vonden dit nuttig
Vertaal recensie in het Nederlands

Omar L. Harris
5,0 van 5 sterren Be a zero not a hero
4 november 2017 - Gepubliceerd op Amazon.com
Geverifieerde aankoop
I had the opportunity to see Col. Chris Hadfield speak recently and he was so compelling, eloquent, and inspiring that I bought his book during the talk and began reading it right after. There are so many nuggets of wisdom in this book but what will stick with me the most is the idea that in a profession (and in life) there are minus 1’s (people who take away and detract from whatever is going on), 0’s (people who neither detract nor add value), and plus 1’s (true value creators). The path to becoming a plus one lies in knowing when and how to be a great zero. This is an elegant example of what makes a team work and will be my new ambition when entering new situations moving forward.
Meer lezen
20 mensen vonden dit nuttig
Vertaal recensie in het Nederlands

Amazon Customer
5,0 van 5 sterren The luckiest people off Earth -- and the lucky readers still on it
6 augustus 2016 - Gepubliceerd op Amazon.com
Geverifieerde aankoop
If I’d ever get to go to space, Col. Chris Hadfield is the human I’d want to go with. But as this is not quite likely to ever happen (the orbital mechanics of my life seems to have placed me on a different trajectory), reading his book “An Astronaut’s Guide to Life on Earth” is probably my best, realistic option to go for a journey with Commander Hadfield.
And what a journey it is! The genre is a familiar one, the combination of an intimate, personal voyage with a grand story of human exploration. People have been at this, and able to write their memoirs, for centuries already. This terrain is thus a familiar one: yet Hadfield – of course – takes us to places where few have reached so far, and even fewer have written about in such a touching way: sincere, funny, and humble.
Somewhere along the ride Hadfield mentions the feeling, together with his crew on the ISS, that “we were the luckiest people off Earth”. Humbly, I consider myself a very lucky human being to be living at a time when the story of such an off-Earth expedition can be written – and that I had a chance to read it. I’m a lucky person, on Earth.
When the book’s part III (“Coming Down to Earth”) finally started to exert its gravity, I’ve tried to linger on for another orbit or two, by considerably slowing down my pace of reading. It’s hard to let go of this book: Hadfield not only commanded the ISS, but also the skills of a gifted storyteller.
And, of course, a singer. Thank you, Chris Hadfield.
Meer lezen
13 mensen vonden dit nuttig
Vertaal recensie in het Nederlands

The life-lessons this amazing man describes would assist many kids through life successfully and happily, understanding that they don't need to be astronauts to achieve these things. They need to understand how to believe in themselves, how to prepare for life's vagaries, and to never stop learning, irrespective of what they do.

The stories about Col. Hadfield's time in the space program and time spent in space itself are engrossing. But it's his stories about being ready for all of it, including letting it all go, that are the most compelling and impactful.

There is no doubt that men and women of his ilk will be the exploring spirits who make way, in a big way, for whatever future awaits humanity. However, it's his assertion herein, that it's not the scale that matters but rather the Attitude, for every individual to achieve their goals and appreciate their own total experience.
Meer lezen
7 mensen vonden dit nuttig
Vertaal recensie in het Nederlands

dmr
5,0 van 5 sterren I loved the way this book is narrated
5 juli 2016 - Gepubliceerd op Amazon.com
Geverifieerde aankoop
I loved the way this book is narrated, it sounds very personal and honest. The level of forethought required for Chris to reach the goals he set for himself, and the amount of dedication and effort he had to make, and just or more importantly his wife, are absolutely amazing. It's fascinating learning everything involved in the life of an astronaut. I didn't know, but makes perfect sense, the amount of studying involved in several areas. They must be jacks of all trades, starting out as masters of some. I advise watching the videos Chris, and other astronauts, made on the International Space Station to fully appreciate the impact and environment of living in space.

I have some doubts about the lessons of an astronaut as something useful for regular people. Some of them are useful, like negative thinking (used regularly first by the Stoics, that I am aware). Being a zero makes a lot of sense when the stakes are very high, but probably not most of the time. However, the lessons are interesting and (depending on the context) valuable anyway.

I recommend this book to anyone with the tiniest bit of interest in space or biographies. Chris is a great storyteller, comes across as a very positive and warm human being, and his love for teaching shows all the way through.
Meer lezen
7 mensen vonden dit nuttig
Vertaal recensie in het Nederlands
Ga naar Amazon.com om alle 823 recensies te bekijken 4,6 van 5 sterren
Terug naar boven
Over ons
Verkoop bij ons
We helpen je graag
© 1996-2020, Amazon.com, Inc. en dochterondernemingen