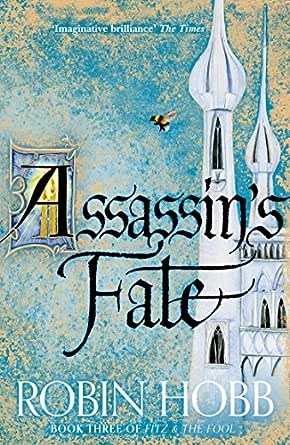 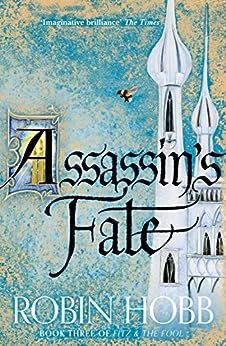 PRAISE FOR ROBIN HOBB "Every new Robin Hobb novel is a cause for celebration. Along with millions of her other fans, I delight in every visit to the Six Duchies, the Rain Wilds, and the Out Islands, and can't wait to see where she'll take me next."--George R. R. Martin Fool's Assassin "Hobb knows the complicated workings of the wayward human heart, and she takes time to depict them in her tale, to tell her story sweetly, insistently, compellingly. . . . A book meant to be inhabited rather than run through."--The Seattle Times "[Hobb's] prose sparkles, her characters leap off the page."--Tordotcom "Fantastic . . . emotionally rich storytelling."--Library Journal (starred review) Fool's Quest "A complex tapestry of adventure, betrayal, destiny, and unrelenting peril . . . Hobb's expertise is evident as always."--Publishers Weekly "Glorious and beautiful storytelling . . . Hobb lets rip with revelations, treachery, vengeance, sword fights and full on magical mayhem."--SciFiNow "If readers have any doubt that Robin Hobb is one of the finest writers in the fantasy genre, then they haven't read any of her work."--SFFWorld

The much-anticipated final conclusion to the Fitz and the Fool trilogy.

Prince FitzChivalry Farseer’s daughter Bee was violently abducted from Withywoods by Servants of the Four in their search for the Unexpected Son, foretold to wield great power. With Fitz in pursuit, the Servants fled through a Skill-pillar, leaving no trace. It seems certain that they and their young hostage have perished in the Skill-river.

Clerres, where White Prophets were trained by the Servants to set the world on a better path, has been corrupted by greed. Fitz is determined to reach the city and take vengeance on the Four, not only for the loss of Bee but also for their torture of the Fool. Accompanied by FitzVigilant, son of the assassin Chade, Chade’s protégé Spark and the stableboy Perseverance, Bee's only friend, their journey will take them from the Elderling city of Kelsingra, down the perilous Rain Wild River, and on to the Pirate Isles.

Their mission for revenge will become a voyage of discovery, as well as of reunions, transformations and heartrending shocks. Startling answers to old mysteries are revealed. What became of the liveships Paragon and Vivacia and their crews? What is the origin of the Others and their eerie beach? How are liveships and dragons connected?

But Fitz and his followers are not the only ones with a deadly grudge against the Four. An ancient wrong will bring them unlikely and dangerous allies in their quest. And if the corrupt society of Clerres is to be brought down, Fitz and the Fool will have to make a series of profound and fateful sacrifices.

ASSASSIN’S FATE is a magnificent tour de force and with it Robin Hobb demonstrates yet again that she is the reigning queen of epic fantasy.

Robin
5,0 van 5 sterren What a Journey
9 mei 2017 - Gepubliceerd op Amazon.com
Geverifieerde aankoop
Over the years I have spent more time with Fitz and the Fool than any other literary character. I have reread the books over and over and still feel like there is more to know. Although not everyone realizes it, but these books are part of a much larger story. The Rain Wild Chronicles and the Live Ship Traders are wonderful series in their own right but in reality they add complexity and depth to the larger story of the Fitz and the Fool.

I myself didn't realize this until just a few years ago and although I had heard that these other "stories" touched on the Farseer world, I didn't really take that seriously. Then I finally read the Live Ship Traders and I fell in love again with a story that gave texture and value to the Fool, Tintaglia and all that is to come. It's a bit like eating apple pie without the ice cream. Is the apple pie still good, yes of course but the ice cream makes it great.

In anticipation of this book I decided not only to read through the books again but to read the Rain Wild Chronicles which I had not previously done. I resisted based on the idea that although I loved Science Fantasy, I didn't really love stories that centered on dragons. I'm ashamed to have put off reading these books. They give a solid foundation where before there was only sand. There were so many "ah-ha!" moments that it gave me a renewed sense of excitement for this book.

In order to fully appreciate this book, it's necessary to have at least read the other 8 books. This book is like the final movement of a Beethoven masterpiece. You cannot have one without the other. No matter how it makes you feel, it must be played out. This book does give you a few answers to things such as why Icefyre buried himself in ice all those years ago and a better understanding of what actually happened to the elderlings. You finally get to experience Clarres in an up close and frightening way. In the past books it was only briefly touched up and I was always wanting more. I got my wish in this book.

From the first page we are tumbled right back to where Robin Hobb left us in Fool's Quest. For me this is the culmination of a 12 year journey and I can only hope the end isn't really the end. I can't say much more otherwise I risk dropping spoilers. It was worth every single tear.

A. B.
5,0 van 5 sterren AWESOME CONCLUSION
10 mei 2017 - Gepubliceerd op Amazon.com
Geverifieerde aankoop
I can't even deal with how great this book was. It tied everything together, all previous 15 books from the Realm of the Elderlings. So yes, if you have only read the Fitz books, you NEED to read the liveship traiders and the Rainwild chronicles to read this and fully enjoy it. However it will be worst it : they are both awesome series, especially the liveship traiders which might be my favorite trilogy of all times. (I do Prefer Fitz story in the end, but it's thanks to the 9 books about him. The liveship Traiders is awesome in only 3 books and I've never encountered a character like Malta Vestrit that had such a development through those books. I did hate her during book 1, and yet...)
Anyway, that's not the point : Assassin's fate is an awesome book, when I read these stories Robin Hobb makes I feel so immersed in the world I'm not entirely present in our world, and it takes me like 2 weeks to get out of it. I never cried for a book like I cried for this one. The previous time I did was with Fool's assassin, the first tome in the serie. I basically sobbed while reading for at least half of this book. I never felt anything like it for any piece of media.
If this is 5 out of 5 stars, then I don't know if I can ever give 5 stars to anything ever again, because I know I never feel for any book like I feel for this one.
Meer lezen
67 mensen vonden dit nuttig
Vertaal recensie in het Nederlands

Chimeric
5,0 van 5 sterren Gobsmaked
13 mei 2017 - Gepubliceerd op Amazon.com
Geverifieerde aankoop
Every reader lives for those rare books where after finishing, one sits and just absorbs the impact. This is one of those.

Other reviewers have said that the ending was perfect and that there could have been no other, and in retrospect, I have to agree, but also I have to admit that I never saw it coming. Usually there's some trick, or secret, or action that will decide the outcome, but good authors mention it enough before the denouement that the reader doesn't feel cheated by some off the wall Deus ex machina. Great authors hide the mention far enough in advance that readers forget all about it and don't recognize the hints and warnings until it's too late.

Assassin's Fate is the sixteenth (but hopefully not the last) book in the Elderling's series; the ninth of those which deal directly with Fitz and the Fool. Fitz has to be my all-time favorite literary character; the one who resonates within me and Nighteyes is the character whose death made the director of the school for which I then worked rush into my darkened classroom to ask me what was wrong, because I was sitting there in front of my laptop bawling like a baby. No other author has ever been able to play my emotions like Robin Hobb. I don't know if she is able to play everyone's equally, or just those of us who struggle with feeling lonely and rejected.

I can't write a standard book review; other people will check all the boxes of story synopsis and character introduction, but I just had to say something to Robin that would let her know just how deeply her Fitz books have affected me, how deeply this book did so. I just can't find the words; I don't know how she does it, but I can't do it justice.
Meer lezen
83 mensen vonden dit nuttig
Vertaal recensie in het Nederlands
Ga naar Amazon.com om alle 977 recensies te bekijken 4,8 van 5 sterren
Terug naar boven
Over ons
Verkoop bij ons
We helpen je graag
© 1996-2020, Amazon.com, Inc. en dochterondernemingen