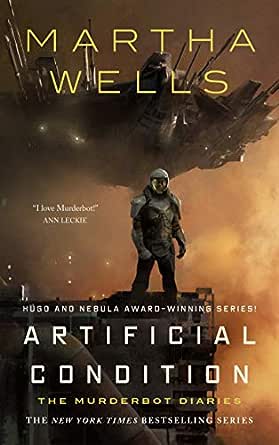 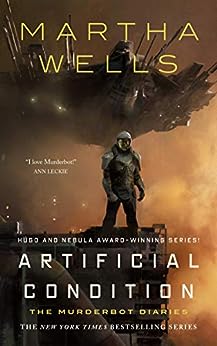 MARTHA WELLS has written many fantasy novels, including The Wizard Hunters, Wheel of the Infinite, the Books of the Raksura series (beginning with The Cloud Roads and ending with The Harbors of the Sun), and the Nebula finalist The Death of the Necromancer, as well as YA fantasy novels, short stories, and non-fiction. Her New York Times bestselling Murderbot Diaries series has won the Alex and Nebula Awards and been shortlisted for others. --Deze tekst verwijst naar de hardcover editie.

PRAISE FOR THE MURDERBOT DIARIES SERIES

"The Murderbot series is a heart-pounding thriller that never lets up, but it's also one of the most humane portraits of a nonhuman I've ever read. Come for the gunfights on other planets, but stay for the finely drawn portrait of a deadly robot whose smartass goodness will give you hope for the future of humanity." --Annalee Newitz, author of Autonomous

"Clever, inventive, brutal when it needs to be, and compassionate without ever being sentimental." --Kate Elliott, author of the Spirit Walker trilogy

"Endearing, funny, action-packed, and murderous." --Kameron Hurley, author of The Stars Are Legion

"Not only a fun, fast-paced space-thriller, but also a sharp, sometimes moving character study that will resonate with introverts even if they're not lethal AI machines." --Malka Older, author of Infomocracy

"Wells gives depth to a rousing but basically familiar action plot by turning it into the vehicle by which SecUnit engages with its own rigorously denied humanity." --Publishers Weekly starred review

"I already can't wait for the next one." --The Verge

"A great kick-off for a continuing series." --Locus

"Martha Wells writes fantasy the way it was meant to be poignant, evocative, and astonishing. Prepare to be captivated 'til the sun comes up." --Kameron Hurley, author of The Mirror Empire and God's War

"The Cloud Roads has wildly original world-building, diverse and engaging characters, and a thrilling adventure plot. It's that rarest of fantasies: fresh and surprising, with a story that doesn't go where ten thousand others have gone before. I can't wait for my next chance to visit the Three Worlds!" --N. K. Jemisin, author of The Fifth Season

"Breathtakingly surprising and fun. For readers who missed earlier entry points to this delightful series, now is the time to get on board." --The New York Times on The Edge of Worlds

Bill Palubinsky
2,0 van 5 sterren Too short for the cost
28 augustus 2018 - Gepubliceerd op Amazon.com
Geverifieerde aankoop
This is the first time I have ever bothered to review a book, and I'm doing it solely because I am ticked off. I've been a big time Martha Wells fan since Death of the Necromancer. Prior to that, I stopped reading SciFi because most of it was pretty lame, but I became a huge fan and pretty much bought each of her books the day it was available, happily paying full price for the provided enjoyment. Then yesterday afternoon I started reading this book. Murderbot is a bit too traditional SciFi for me, but his quirkiness and the quality writing make up for it. I was getting into the book, having traveled to the coffee shop and settled into my favorite big squishy chair, when BAM!, the book ended? My initial thought was my Kindle was acting up, but no, this is a really short book. That's fine for $3.99, but for the ten bucks I paid I feel my loyalty has been taken advantage of. Now, I'll probably continue the series because I have a ton of love an respect for the author, but I do feel a bit betrayed. I'm retired and read like a fiend, so I need to get decent value. If this is the "new thing", then I'll probably have to find a new favorite author to love and respect.
Meer lezen
150 mensen vonden dit nuttig
Vertaal recensie in het Nederlands

Books Of Brian
4,0 van 5 sterren Give You The Razor - Sell You The Blades!
26 mei 2018 - Gepubliceerd op Amazon.com
Geverifieerde aankoop
IThis is the 2nd volume in Martha Wells’ “Murderbot Diaries”. It’s also the 2nd of my May New Releases – the first being “The Wolf: Under The Northern Sky” – which turned out to be a beautiful and thoroughly enjoyable book.

I enjoyed “All Systems Red” – enough to convince me to buy the three sequels. The next book – “Rogue Protocol” – is scheduled for release in August of this year. Contrary to what I wrote in the first review, I did actually did buy all volumes in hardcover. Given what I know Wells is capable of – I guess I decided to give her the benefit of the doubt and just assume that she’s going to do something special with this story.

After reading this second book, I have to say…Murderbot is growing on me. I was right about the holes in “All Systems Red” – Wells is parsing out her backstory and is filling in the blanks as she goes. MB is becoming a more substantial and relate-able character as the story progresses. He’s growing and defining himself – starting to come to terms with his independence and deciding who he wants to be. Most of that growth is driven by his need to interact with a growing group of diverse individuals and the choices those interactions force on him. He obligates himself to a new group of humans – first via a contract he negotiates and then in response to a series of ethical choices that result from that contractual obligation. Those choices allow you to better understand MB, how he thinks about himself and how he feels about the humans who created him.

Just as important are the relationships he forms with other machine intelligences. The first and most entertaining of these is the alliance or friendship or something in between that he forms with the Artificial Intelligence – ART – responsible for the operation of a Research Transport vessel that he uses to escape from the world of his first set of human patrons. ART is a surprise for MB – he’d assumed that this would be an uncommunicative machine intelligence. In fact, ART turns out to be as communicative and as richly complex as MB and their relationship transitions from arms length wary to mutually supportive and amusingly familiar. ART is arrogantly confident in his superior abilities but humanizes as a result of his interactions with MB. As the story progresses, they become an effective, entertaining, almost lovable team united partially by the boredom of their constrained lives in service to human beings that are – in many ways – far less capable than either of them.

Long to short – this story is becoming increasingly interesting and entertaining. I actually enjoyed “Artificial Condition” more than I did “All Systems Red”. It was richer, more complex and it finally allowed me to connect in a more meaningful way to MB. I can’t help but think that I’m going to really wind up liking this guy as the story progresses.

I honestly have only one complaint and it has nothing to do with the book itself. I don’t like the way Martha Wells and the publisher are commercializing the work – hence the Razor / Blades quote. The story is being sold as 4 separate novellas:

All Systems Red – 2017
Artificial Condition – May 2018
Rogue Protocol – August 2018
Exit Strategy – October 2018
They’re sold separately as hardcovers at the price of $16.19 and as e-copies for $9.99. In reality, these are 4 sections of one book – obvious as you read through each separately – and could easily have been published in one volume. The fact that they were all released within an 18 month period only confirms that the Author and the publisher made a pretty crass commercial decision to break the book into four pieces and sell them separately to maximize revenue.

Instead of paying $25 for a single hardcover volume, I’m forced to purchase 4 separate novellas for a combined cost of ~$68.00 in hardcover or ~$40.00 in digital format. Before you say it, I will – shame on me – no one forced me to spend the money – I know I’m being played. Nevertheless, I’m really enjoying the books and I want to get my hands on them as they become available. It just leaves a bitter taste in my mouth and it makes me wonder about Wells’ attitude towards her fans and readers. Wells and her publisher gave me the Razor but she’s selling me the blades – one at a time – at a pretty high price.

My recommendation – wait until an omnibus edition is published and just read it straight through. You’ll enjoy the story AND you won’t feel like you’re being exploited. I wish I was able to take my own advice. 🙁

Tuna5110
3,0 van 5 sterren Way too much money
16 mei 2018 - Gepubliceerd op Amazon.com
Geverifieerde aankoop
This story is way too short for the price. I want to read the next one but I certainly am not going to shell out $10 for a novella.
Meer lezen
256 mensen vonden dit nuttig
Vertaal recensie in het Nederlands

william r. martinez
2,0 van 5 sterren A short story posing as a novel to get your money
15 mei 2018 - Gepubliceerd op Amazon.com
Geverifieerde aankoop
Like so many others, I fell for the first Murderbot book and gleefully awaited the series' return. What a disappointment. This novella reads like a mere chapter in a longer book. The plot is paper-thin, the characters cardboard cutouts, and the writing is serviceable at best. At worst, the prose is hugely repetitive and bland. I paid $10 for the Kindle edition of the book and it took me less than two hours to read it. And now the publisher wants me to pay another $20 for the next two installments. I can abide by reading a poorly written book (it's not even a book, really, but a short story) but I hate getting ripped off.
Meer lezen
211 mensen vonden dit nuttig
Vertaal recensie in het Nederlands