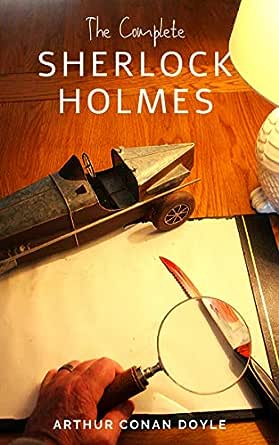 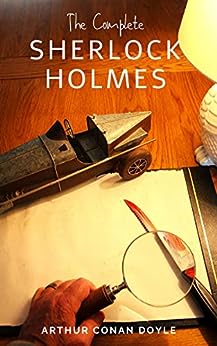 Sherlock Holmes is a fictional detective of the late 19th and early 20th centuries, who first appeared in publication in 1887. He is the creation of Scottish born author and physician Sir Arthur Conan Doyle. A brilliant London-based detective, Holmes is famous for his intellectual prowess, and is renowned for his skillful use of deductive reasoning (somewhat mistakenly - see inductive reasoning) and astute observation to solve difficult cases. He is arguably the most famous fictional detective ever created, and is one of the best known and most universally recognizable literary characters in any genre.

Conan Doyle wrote four novels and fifty-six short stories that featured Holmes. All but four stories were narrated by Holmes' friend and biographer, Dr. John H. Watson, two having been narrated by Holmes himself, and two others written in the third person. The first two stories, short novels, appeared in Beeton's Christmas Annual for 1887 and Lippincott's Monthly Magazine in 1890. The character grew tremendously in popularity with the beginning of the first series of short stories in The Strand Magazine in 1891; further series of short stories and two serialized novels appeared almost right up to Conan Doyle's death in 1930. The stories cover a period from around 1878 up to 1903, with a final case in 1914.

will5967
5,0 van 5 sterren The Absolute Best COMPLETE Sherlock Holmes Collection!
22 oktober 2015 - Gepubliceerd op Amazon.com
Geverifieerde aankoop
Remember to look closely at the cover of all these "complete" Sherlock Holmes books. With the wonders of capitalistically fueled competition, each edition of all 4 novels and 56 short stories by Sir Arthur Conan Doyle is beginning to look more and more similar. Not all are created quite as equal as one would think, however. Read on to find out more.

In my quest to find the holy grail of Sherlock Holmes literature, aka; THE definitive collection of original, Conan Doyle penned stories, I actually ended up buying (and reading and rereading) 3 different versions. My assessment of all 3 is as follows:

1 - Sherlock Holmes: The Ultimate Collection - http://www.amazon.com/gp/product/B00DCD53C2/ref=x_gr_w_bb?ie=UTF8&tag=httpwwwgoodco-20&linkCode=as2&camp=1789&creative=9325&creativeASIN=B00DCD53C2&SubscriptionId=1MGPYB6YW3HWK55XCGG2)
* This is a perfectly adequate collection. It DOES include all 4 novels and 56 short stories, but the book is all text, with no real illustrations to speak of. When I first purchased it as an ebook, it did NOT include all the stories, but before I was even finished reading it, a simple Kindle update added all the rest, making it certifiably "complete." So if you see a review of The Ultimate Collection that says it isn't complete, it's probably just an old review. At any rate, the "Film and Television Adaptations" and Beyond the Canon" synopsis sections at the end of the book are also included, but do not appear in the other Sherlock Holmes collections. Kindle formatting isn't so good in this one, however, unfortunately. Individual story/chapters aren't easily accessible from the drop down menu, as they are in other collected SH books. My five star rating is for the writing itself, which is of course, practically peerless.

2 - The Complete Sherlock Holmes: Volumes 1-4 (The Heirloom Collection) - http://smile.amazon.com/gp/product/B007PT1PEY?redirect=true&ref_=cm_cr_ryp_prd_ttl_sol_0
* The Heirloom Collection isn't the absolute best compendium of SH stories, but it is extremely good. Most importantly, it does contain all 4 novels and 56 short stories by Sir Arthur Conan Doyle, though not always in the exact same order as other editions -- making it a little confusing, when comparing different editions, to determine if all the stories are actually included (and they really are). Design wise, the graphic presentation (font choices, layout, etc) of this "heirloom edition" is superb -- making it clearly better in that regard than perhaps any of the "complete" Sherlock Holmes books currently available. The color illustrations aren't bad either, but there really aren't all that many for such a large book, filled with so many classic tales. Good Kindle formatting overall, but not as good as it could have been.

3 - The Complete Sherlock Holmes (Illustrated) (Top Five Classics Book 17) - http://www.amazon.com/gp/search/ref=x_gr_w_bb?keywords=9781938938160&index=books&linkCode=qs&tag=httpwwwgoodco-20
* This is the one actually being reviewed here. And it's the absolute best of the three, in my opinion. This Top Five Classics edition includes all 4 novels and 56 short stories by Arthur Conan Doyle. Kindle formatting is superb, and best of all, most (if not all) of the classic illustrations that accompanied the original, first run publication of each story are included. Some short stories even have up to three separate illustrations! Pretty much all of the plates are reproduced in pencil/pen & ink drawn black and white, but the quality of the artwork is vastly superior to what appears in most other SH collections.

So for my money, the Top Five Classics edition (#3) is hands down the very best one currently available. Wish I'd known that before I purchased all three, but none of these collections were much more than $3 to $6 each, and the Sherlock Holmes: The Ultimate Collection was only 99 cents! So if you don't care about illustrations, design quality, or good Kindle formatting, then you can certainly save a few bucks by choosing that particular version of the book (see #1 above). On a final note, The Adventure of the Cardboard Box IS included in the Top Five Classics book, but appears in The Memoirs of Sherlock Holmes novel, as opposed to other editions that include it in the collected short story novel, His Last Bow. It's a little confusing at first, with so many "adventures" to keep track of, but rest assured, the Cardboard Box and all the rest really ARE there. So the game's afoot, no matter which edition you choose, but personally, if I had to do it all over again, I'd probably just buy the Top Five Classics edition.

T. Anderson
1,0 van 5 sterren I love the Sherlock Holmes canon
27 juni 2016 - Gepubliceerd op Amazon.com
Geverifieerde aankoop
The one-star rating is for this Kindle edition, not for the stories themselves. I love the Sherlock Holmes canon, and wanted a copy on my Kindle. After purchasing this one, I actually returned it to get my $0.99 back because it doesn't have a table of contents. It's a collection of 4 novels and 56 short stories, and there is no way to search through for a specific story. Just start at the beginning and scroll forever. It can't be that difficult to code in a table of contents.
Meer lezen
195 mensen vonden dit nuttig
Vertaal recensie in het Nederlands

Amazon Customer
1,0 van 5 sterren Is this some kind of joke???
21 mei 2018 - Gepubliceerd op Amazon.com
Geverifieerde aankoop
DO NOT ORDER THIS BOOK IN PAPERBACK!

I do not have a kindle, so I ordered this book in paperback after reading a number of recent 5 star reviews. When the book arrived it was massive (think college textbook), but that was far from the worst part. As I opened the book I realized that not only was the text almost illegibly small, it was not formatted at all. A number of pages were simply walls of text (see attached images). To add insult to injury most of the 'illustrations' were empty white text boxes with a link copied in them!

I honestly just had to laugh after flipping through this monstrosity. I'm pretty sure the factory copied and pasted the Kindle text file and sent it out to print!

Amazon instantly refunded my credit card without any hassle... but now I'm stuck with this useless brick and a heap of disappointment. I guess its a good night for a bonfire?

Schenley M. Pilgram
1,0 van 5 sterren Horrible printing of excellent stories
15 november 2015 - Gepubliceerd op Amazon.com
Geverifieerde aankoop
I was looking for a complete Holmes collection, and another reviewer pointed to this one as a good choice (referring to the Kindle version). I saw there was a print version of the same collection, and wanting a good series of stories to read at bedtime to avoid screens, I ordered the book without taking a good look at it. Plus, I saw a review had an image of two volumes... But the one I was ordering turned out to be one. One massive book, the size of a college textbook. This would not be so bad, if the font were large enough to read comfortably (I'm only 31) or arranged in columns. Reading tiny print that runs across such large pages is difficult, as your eyes have trouble tracking down to the next line correctly. The pages are not numbered. In addition, the "illustrations" are complete rubbish.

Im just thankful that Amazon is so wonderful about returns. I may have to visit a brick and mortar store or do some online detective work to find a good printed set.

I strongly discourage you from buying this printed volume. It would be much easier to read the Kindle version on a phone screen than read this monstrosity.
Meer lezen