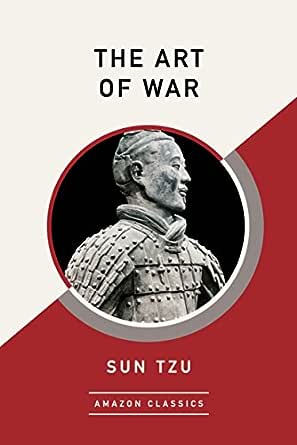 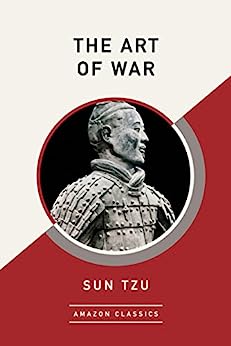 Long considered the most essential treatise on military strategy and tactics, The Art of War comprises thirteen chapters, each dedicated to a different aspect of warfare. Reaching far beyond the battlefield, it is a manifesto for success in every kind of conflict or competition, having had a notable influence on various subjects such as law, sports, and interpersonal relationships.

In this definitive 1910 Lionel Giles translation, the celebrated sinologist’s interpretive notes and valuable commentary make clear the nuances of Sun Tzu’s language. Most critical, Giles provides the context and culture from which the general’s theories emerged.

Revised edition: Previously published as The Art of War, this edition of The Art of War (AmazonClassics Edition) includes editorial revisions.

Bilbo Fredericks
5,0 van 5 sterren Kept me from being overrun and defeated by a gaggle of attacking preschoolers
24 februari 2019 - Gepubliceerd op Amazon.com
Geverifieerde aankoop
The advice in this book still stands today, specifically regarding the use of spies and several of the land based tactics. Allow me to elaborate.

As we do every Tuesday morning, I met with my local men's group for our workout on the local preschool playground, the only location where one can engage in the strenuous exercises of running up slides and seesaw step aerobics. And as with every other Tuesday, those darn preschoolers invaded, effectively smashing our vanguard and dividing our force, which spurned a tactical retreat that quickly turned into a rout.

While checking Amazon for some first aid supplies to refill our field dressing kits, I came across this book. I spent the next 6 months reading it cover to cover, every night. Then I began to plan.

Sun Tzu taught me that in order to overwhelm a force superior in numbers, a great commander must disguise his own numbers and employ subterfuge to sow doubt and terror among his enemy's ranks. To this end, we started a month-long psychological terror operation consisting of pictures of frowny faces drawn in crayon and constant blaring of vintage Barney recordings. The effect of this was to ruin nap time and exhaust the enemy.

We then started to probe enemy supply lines, effectively cutting off all supplies of milk. Like nap time, snack time was also ruined. The enemy's desperation began to show, and their decision making processes became clouded. At their weakest point mentally, we infiltrated.

12 of our best soldiers dawned velcro shoes and tiny people clothing stolen from distracted enemy backpacks, and slipped in amongst the preschool class. Talk of allegiances of bored grown up dads unifying under a single banner, superior in numbers, claiming the ancient rite of first dibs spread amongst the enemy much as a pox. A rumor of an eminent first strike began to spread. Action would have to be taken.

The toddlers assembled their forces, calling in all allies, and marched under the banner of the PTA---a ruse already uncovered by our spy network---in an attempt to cause our forces to believe that the greatest of foes, that of angry and bored suburban mothers, may have been persuaded to take up arms.

We created the illusion of superior numbers by meeting this frontal assault head on and melting away several times, followed by a false pincer movement that caused the enemy children to concentrate their forces along their northern flank and slowing their advance. We had taken the high ground including the big slide, and placed scouts on the monkey bars to monitor enemy movements. Through a brilliant plan by one of our commanders, we were able to turn on the soccer field sprinklers the night before and totally saturate the ground. Our enemy's tiny feet bogged down in the mud, causing further chaos and allowing our artillery, consisting of six 40mm water balloon launchers to rain devastation and sheer terror upon the remaining force. Our calvary executed a brilliant flanking maneuver and encircled the enemy, who exhausted, wet, and cranky, sued for peace.

Our terms were very favorable: permanent playground dibs and a 30% tariff on all snack imports and seizure of all chocolate milk, with harsh stipulations of wedgies for any violations of terms.

We owe this great victory to Sun Tzu. As I peer over the freshly seeded green grass each morning that was once the site of our most grand of victories, and see the tiny enemy faces gazing sadly upon what was once their most holy patch of earth, I smile in satisfaction and gratitude for the Art of War's timeless teachings.

And I wait. For our enemy force will soon graduate to elementary school, and a fresh force will take their place again. This battle is won, but the war may very well drag on. Our vigilance is our greatest asset, our hard earned wisdom our only hope. The spirit of Sun Tzu smiles upon us today, but we must never falter.

Reinold F.
5,0 van 5 sterren Classical immortal wisdom, but outdated and nosy translator (AmazonClassics Edition)
13 december 2019 - Gepubliceerd op Amazon.com
Geverifieerde aankoop
Is said that poetry is the way in which words, like ancient magic, transmits a precise knowledge, a truth, in such a way that symbol and meaning are almost the same. This work by Sun Tzu feels like poetry as it goes to the essence of the human being as a creature that attempts enterprises. Sun Tzu has bequeathed us a short book that is classical in the sense that its immortality is confirmed by the fact that it doesn't matter in which century you read it, it is not outdated. Is universal because it doesn't matter your race, gender, occupation or beliefs: "The Art of War" is illuminating. It lights up deep truths about the way we have to behave in order to win. It is a fundamental reading, the sooner you read it the better : )

AmazonClassics Edition are the best for works written in English language. They offer the text in its purity, with X-Ray and excellent formatting. Sadly for their books written in another languages they rely on translations already in the public domain. This means that is a question of luck to have a good translation, in the case of "The Art of War" the problem is that the translator, Lionel Giles, gives a poorly organized introduction with duplicate and, to be blunt, boring data. Fortunately afterwards he has the good taste to put the text pure without commentary. It is a good translation with few outdated words. But it adds then the same text with a commentary that is pointless, only an exercise of vanity, because it explains what is already crystal clear, save a couple of data all is, for our century, already outdated. I'd love if Amazon would allow us to delete pages and chapters so this perfect book could not be mutilated with unnecessary additions. For this book I think the AmazonClassics Edition, despite its good presentation, is not the best one.
Meer lezen
2 mensen vonden dit nuttig
Vertaal recensie in het Nederlands

Blin
5,0 van 5 sterren Always a useful book
28 november 2018 - Gepubliceerd op Amazon.com
Geverifieerde aankoop
Anyone in martial arts or any aspect of military endeavor should probably read this as it is chock full of pretty ageless wisdom that applies even today. Well worth it.
Meer lezen
5 mensen vonden dit nuttig
Vertaal recensie in het Nederlands