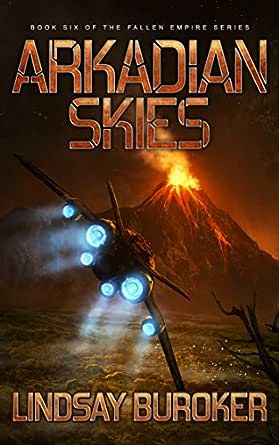 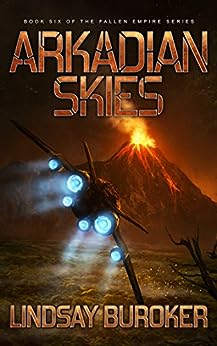 Eileen
1,0 van 5 sterren That's enough for me.
26 september 2016 - Gepubliceerd op Amazon.com
Geverifieerde aankoop
Well, I had to give up on this series. I'm a big fan of Buroker's Emperor's Edge and Dragon Blood books, and even read the Rust & Relics series when I needed a diversion between other books I was reading. So when I saw that she had a new sci-fi series, I decided to check it out. The first book in the series was okay, and it intrigued me enough to keep going. And since I had nothing else to read, I continued with the series. I started to question things early on when Alisa didn't seem that focused on finding her young kidnapped daughter (as some other reviewers have mentioned). Why bother throwing in the kidnapped daughter plot if you just want the characters to have wacky space adventures? And then I started to find Alisa and her crew to be less and less likable. Alisa has no money, but she keeps Beck employed because she likes him, even though the fact that the mafia is after him causes them no end of trouble? Abelardus relentlessly and aggressively sexually harasses her, at one point in the series using his mind-control powers to basically give her mental roofies to sexually assault her (after she has repeatedly made it VERY clear that she has no interest in him), and she LET'S HIM STAY ON THE SHIP, where he continues to aggressively sexually harass her throughout the series. The worst part is that the author plays these moments (not the assault itself, but all the harassment afterwards) as comedy! Sexual harassment is not funny! Just because the dude (or lady) is hot, doesn't make it okay! Speaking of sexual harassment, Alisa doesn't give poor Leonidis much of a break on that account, either. Really? Go find your daughter! Daughter now, cyborg sex later. Say it with me, Alisa.

I had to give up on this 6th book halfway through after struggling through the previous five, waiting for things to improve and for the plot to go somewhere, but I'm done. I will continue to recommend the Emperor's Edge and Dragon Blood series to friends, but Fallen Empire is just not for me, and I can't recommend it to others.
Meer lezen
15 mensen vonden dit nuttig
Vertaal recensie in het Nederlands

Nix Whittaker
5,0 van 5 sterren I can't wait for the next one
3 september 2016 - Gepubliceerd op Amazon.com
Geverifieerde aankoop
I was so hoping this would be the last book because I'm on pins and needles waiting for Leonidas and Alisa to get their happily ever after that they deserve. This story though does add to the overall story and we get to meet Alisa's father. If you have been reading this series this is even better than the last book and I can't wait for the next book. I'm so lucky that Lindsay is such a prolific writer because I have no patience.
Meer lezen
7 mensen vonden dit nuttig
Vertaal recensie in het Nederlands

Jas P
5,0 van 5 sterren One of the Best So Far – Buroker is Brilliant
26 april 2017 - Gepubliceerd op Amazon.com
Geverifieerde aankoop
After surviving Cleon’s Moon, the crew must go to Arkadia to continue the various missions that they are on, to find Jelena, to retrieve the Staff of Lore, to avoid the Alliance, to help Leonidas.
The Staff was taken by a rogue group of Starseers, the Chasadski on Cleon’s Moon, and in the process, Alisa met her biological Dad, Stanislav Schwegler.
Buroker writes exceptionally well with her characters. It’s hard to remember at times just how far these characters have progressed, how much we have learnt about them, the depth they have gained, and the attachments we have grown for them. From the growing relationship between Alisa and Leonidas, Mica and her explosives and engineering exploits, the reclusive Dr, Alejandro, with his Imperial past, now a ‘Monk’, seeking the staff, and yet a medical genius. And one of the best characters of the story, Yumi, with her surprising amount of knowledge on wide variety of things, and then there is her illicit and not so illicit drug manufacturing in her room. Add to this her wanting to be a Starseer, and her relations that are Starseers, and all of this makes Yumi a wonderfully diverse character that just adds so much depth to the story.
And this is the true power of Buroker’s story, her characters, they are so powerful, each so individual, that they add so much to the story, give it so much depth, so much emotion, and ultimately, draw you in, giving you a real attachment to each of them and what is going to befall them next, even Alejandro.
In this particular episode, the crew have returned to Arkadia, following the trail of the rogue Starseers, the Staff of Lore, and Jelena. What they arrive into is more Alliance entanglements and more trouble.
In the middle of all of this, Alisa has the brilliant idea from a comment Leonidas makes, to kidnap a former Imperial Dr to help with his Cyborg issues. And, without giving too much away, to really make things interesting, the rogue Starseers unleash the power of the staff on Arcardia, causing chaos and destruction on a city on the surface.
Alisa, still with Aberlardus, and now with her father Stanislav, as well as the rest of the crew, must meet this new threat to not only try and find what has happened to Alisa’s daughter, to retrieve the staff, but also to save Arkadia before the planet is ripped in two.
This is a really exciting story, with lots of action, lots of interesting story lines, mixed alliances and exceptional characters, the unfolding storylines around the Starseer factions is outstanding and as usual, the clever humour.
Arkadian Skies is one of the best so far in the series and a must read.
Meer lezen
Een iemand vond dit nuttig
Vertaal recensie in het Nederlands

smp0819
5,0 van 5 sterren Looking forward to my next fix
7 september 2016 - Gepubliceerd op Amazon.com
Geverifieerde aankoop
OK, Buroker's books are officially crack to me. The characters jump off the page with their snarky banter, and you can't help but blaze through the pages as you're feeling the same tension they are in the midst of the non-stop action. Unfortunately (?), I finished this one the same day I started. I thought I was proceeding at a respectable pace when I noticed I was 39% through the book, then the next time I checked, it was 90%. Considering the poor characters raced through a variety of heart-attack-inducing adventures in about one day's time, that seems about right. All the regular suspects appear in this installment: humor, action, romance, and the tantalizing continuing mystery of "where the heck is Alisa's daughter??" Looking forward to my next fix...
Meer lezen
3 mensen vonden dit nuttig
Vertaal recensie in het Nederlands

Barry
4,0 van 5 sterren Getting better as it goes along
13 juni 2020 - Gepubliceerd op Amazon.com
Geverifieerde aankoop
The story is finally about a little more than just the circumstances that happen to keep the protagonist and her love interest apart. The story is finally utilising the other characters in the series even if it does not actually switch to their point of view. To me right now the only thing keeping this series from getting a 5/5 is the inability of the author to switch points of view and to knit together a story from multiple view points to accomplish a greater whole. The other thing is that the romantic interest looks a bit textbook only punctuated by the age old soap opera cliche of insurmountable odds for the couple to actually get together.
Meer lezen
Vertaal recensie in het Nederlands
Ga naar Amazon.com om alle 313 recensies te bekijken 4,7 van 5 sterren
Ontdek het beste van shopping en entertainment
Gratis en snelle bezorging van miljoenen producten, onbeperkt streamen van exclusieve series, films en meer
> Ontdek Prime
Terug naar boven
Over ons
Verkoop bij ons
Amazon-betaalmethoden
We helpen je graag
© 1996-2020, Amazon.com, Inc. en dochterondernemingen