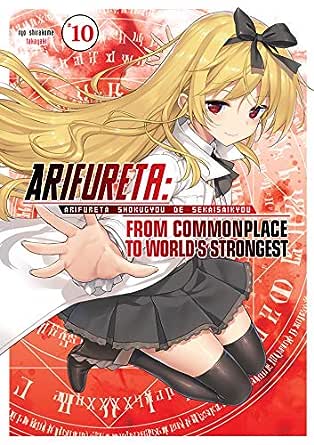 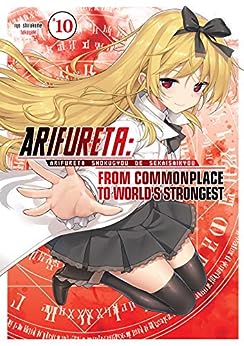 The end of Hajime's journey is finally in sight. So long as he and his comrades can overcome this final trial, his long-awaited dream of returning home can be realized. But one last obstacle stands in their way: Yue, Shea, Tio, and Kaori must still overcome their copies. With all of the baggage they're carrying with them, will they be able to accept themselves for who they are?
click to open popover

Your Average Eldritch Abomination
5,0 van 5 sterren Back on Track to Killing God
8 november 2019 - Gepubliceerd op Amazon.com
Geverifieerde aankoop
This volume addresses, and fixes, many of the problems that I had with volume 9. The only issue remaining was pacing, which is still a little wonky here and contains a lot of unnecessary repitition, but I was willing to overlook it here because the characters finally get their time to shine. Given how much trauma each character was carrying into this volume, I am very impressed that most of it was addressed and accepted; it was pretty heartwarming to have these cliched heroines (whom I have loved from the beginning) finally start getting flushed out in a way that isn't just "fall in love with Hajime and become OP."
Tio, in partciular, gets a really nice scene, and I'm glad she's getting a kick in the behind to being accepted. If only she weren't a pervert. Plus there's more cute Yue fllirting, which I can never get enough of.

SPOILERS:
Very annoying cliffhanger. If Freid doesn't instantly die next volume, I'm gonna be mad. We don't need a pompous villain or anymore setbacks- let's get to the god killing.
Kouki doesn't die. Almost tempted to knock a star off, because the reason he isn't straight up mercifully Alt-F4'd out of life is the generic "hurt someone's feeling" cliche that's gotta bite them in the butt later. He had an expiration date of about 11 volumes ago, so do the right thing, Skirakome-sensei.
Still, to see the main cast actually get to experience Hajime's life in the Abyss, and Kouki's reaction to it, was worth this labyrinth being split into two volumes. Definitely a step back in the right direction, and the flaws present in the previous volume are muted to an acceptable degree here.

Robert Henderson
5,0 van 5 sterren I like this series
4 november 2019 - Gepubliceerd op Amazon.com
Geverifieerde aankoop
I make no claims as a professional critic. However i will say that i enjoy the Arifureta series as i've followed the web novel to this day. The light novels are great and add refined touches that give (imho) a nice fleshing out of the world and characters. I hope the Arifureta afterstories get the LN treatment too.
Meer lezen
4 mensen vonden dit nuttig
Vertaal recensie in het Nederlands

Kindle Customer
5,0 van 5 sterren I'd say the best out of the series so far
4 november 2019 - Gepubliceerd op Amazon.com
Geverifieerde aankoop
You find out more about what drives them, you can see through all the battles the true feelings and finally you get a sincere of what will happen in the upcoming stories. Theirs also one he'll of a twist, that I'd you were paying attention to the story you see coming of not well it'll be even more of a surprise.
Meer lezen
3 mensen vonden dit nuttig
Vertaal recensie in het Nederlands

Kindle Customer
4,0 van 5 sterren Too short!
5 november 2019 - Gepubliceerd op Amazon.com
Geverifieerde aankoop
I wish this has been combined with the last volume. I wouldn't have had to reread vol.9 to remember the nuances is forgotten. Please release volume 11 quickly. This one tried my patience.
Meer lezen
3 mensen vonden dit nuttig
Vertaal recensie in het Nederlands

Steve C
5,0 van 5 sterren Amazing storyline and series!!
5 januari 2020 - Gepubliceerd op Amazon.com
Geverifieerde aankoop
I am writing this review based on the fact that this is the first book I have ever read from an anime series. The reason I bought and read the series was because I was so impressed by the anime. I realize animation is not as close as the books, but this is true of all series written. The visual story line has to compress much over a short time for viewing after all. Which is why I purchased the books ... I wanted to get the full in depth story and I was not disappointed!!
Fabulous, amazing, raw, gritty and a far better story line than the "goody goody" lead character that most others write!! Sure is great to have a character that starts off as a total dweeb and through circumstance and sheer determination and willpower manages to OP himself ... along with being a total baddass once he does!! Having an amazing progression with the inclusion of other fabulous characters is entertaining too!!
I really, really, REALLY want the next in the series please!!!
I will wait for the rest of the anime series ... but I want to finish the books first!! :)
Thank you to the author!! :)
Meer lezen
Vertaal recensie in het Nederlands
Ga naar Amazon.com om alle 17 recensies te bekijken 4,9 van 5 sterren
Terug naar boven
Over ons
Verkoop bij ons
We helpen je graag
© 1996-2020, Amazon.com, Inc. en dochterondernemingen