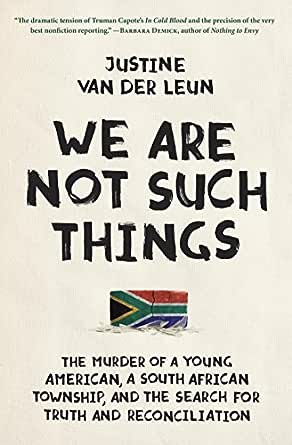 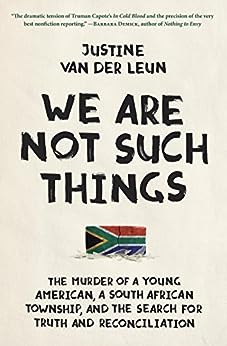 We Are Not Such Things: The Murder of a Young American, a South African Township, and the Search for Truth and Reconciliation (English Edition) Kindle-editie

"We Are Not Such Things overturns the conventional narrative of [Amy] Biehl's murder by trying to establish what actually happened, and by examining its effects, over two decades, on the people involved. In this way, its publication could not be more timely, given how many young black South Africans are now expressing anger at--and betrayal by--the Mandela project. . . . Where [Justine van der Leun's] book is gripping, explosive even, is in the kind of obsessive forensic investigation--of the clues, and into the soul of society--that is the legacy of highbrow sleuths from Truman Capote to Janet Malcolm. . . . [Van der Leun] can write superbly, and . . . she crafts a close sense of place that rivals the work of Katherine Boo. . . . She is deeply compelling as a sleuth and social observer: The book becomes a page turner. . . . The reader leaves it, as one does any well-wrought mystery, with precisely the author's own sense that truth resides in the failure to find it."--The New York Times Book Review "Extraordinary . . . Justine van der Leun's account of a South African murder is destined to be a classic. . . . Van der Leun stays with the story, all of it, and crafts a narrative both fuller and more intimate than the one the world was told. She takes nothing away from Amy, whose murder was horrific. But she impresses upon the reader that no one life or death is worth more than another. For this, and for writing a masterpiece of reported nonfiction, she deserves our plaudits and our awe."--Newsday "Engaging . . . part whodunnit and part travelogue . . . a deeply researched and thought-provoking book . . . with some penetrating insights."--The Economist "[Van der] Leun probes the characterization of [Amy] Biehl as a martyr to the cause of black South African liberation, and examines the murder, the trials, and the afterlives of witnesses, detectives, and the accused. She displays exquisite insights into the inner lives of those involved, the erasure of shameful histories, and the stresses of absolution without accountability."--The New Yorker

"Unforgettable . . . a gripping narrative that examines the messiness of truth, the illusory nature of reconciliation, [and] the all too often false promise of justice."--The Boston Globe

"Compelling . . . [van der Leun] has a resident's wry familiarity with the jangling contradictions of a country in which shopping malls sit side by side with shantytowns, while retaining an outsider's unsentimental perspective on its ongoing racial tensions, and a bracing scepticism about the rhetoric of liberation. [Her] hard-nosed reconstruction of an alternative narrative . . . raises troubling, and still pertinent, questions about the deals that sometimes have to be struck by former enemies when faced with the exigencies of nation-building."--The Guardian

Justine van der Leun reopens the murder of a young American woman in South Africa, an iconic case that calls into question our understanding of truth and reconciliation, loyalty, justice, race, and class—a gripping investigation in the vein of the podcast Serial

“Timely . . . gripping, explosive . . . the kind of obsessive forensic investigation—of the clues, and into the soul of society—that is the legacy of highbrow sleuths from Truman Capote to Janet Malcolm.”—The New York Times Book Review

The story of Amy Biehl is well known in South Africa: The twenty-six-year-old white American Fulbright scholar was brutally murdered on August 25, 1993, during the final, fiery days of apartheid by a mob of young black men in a township outside Cape Town. Her parents’ forgiveness of two of her killers became a symbol of the Truth and Reconciliation process in South Africa. Justine van der Leun decided to introduce the story to an American audience. But as she delved into the case, the prevailing narrative started to unravel. Why didn’t the eyewitness reports agree on who killed Amy Biehl? Were the men convicted of the murder actually responsible for her death? And then van der Leun stumbled upon another brutal crime committed on the same day, in the very same area. The true story of Amy Biehl’s death, it turned out, was not only a story of forgiveness but a reflection of the complicated history of a troubled country.

We Are Not Such Things is the result of van der Leun’s four-year investigation into this strange, knotted tale of injustice, violence, and compassion. The bizarre twists and turns of this case and its aftermath—and the story that emerges of what happened on that fateful day in 1993 and in the decades that followed—come together in an unsparing account of life in South Africa today. Van der Leun immerses herself in the lives of her subjects and paints a stark, moving portrait of a township and its residents. We come to understand that the issues at the heart of her investigation are universal in scope and powerful in resonance. We Are Not Such Things reveals how reconciliation is impossible without an acknowledgment of the past, a lesson as relevant to America today as to a South Africa still struggling with the long shadow of its history.

“A masterpiece of reported nonfiction . . . Justine van der Leun’s account of a South African murder is destined to be a classic.”—Newsday

Eva Melusine Thieme
4,0 van 5 sterren Didn't quite answer the questions it promises to answer, but fascinating read nonetheless
11 januari 2017 - Gepubliceerd op Amazon.com
Geverifieerde aankoop
Having lived in South Africa, I had to read We Are Not Such Things when I first came across it.

The story is about author Justine van der Leun’s quest to get to the bottom of what really happened the day Amy Biehl, an American student on a Fullbright scholarship in South Africa, was killed by an angry mob in a township near Cape Town in 1993 – during that period between Nelson Mandela’s release from prison and his election as president when the threat of civil war loomed over South Africa.

If you’re interested in that long-ago story, this book will bring it back in all its detail. But it’s more than that. I would say it’s one of the best portraits of life in a South African township that I’ve read. In the course of her investigation, Justine gets to know the main players on that fateful day and forges an especially close bond with one of the men who pleaded guilty to Amy’s murder, Easy Nofemala. Through Easy, Justine gets to meet other witnesses on frequent visits to Gugulethu and surroundings.

The deeper she digs, the more confusing it gets. Did Easy and the other accused really commit the crime? Were they wrongfully convicted, and if so, why is it so hard to get to the truth? To me, these visits revealing the convoluted relationships between the different characters of that story and their even more convoluted relationship to the truth are the real gem in her book.

It is somewhat unsatisfying that when you turn the last page, you have no idea what really happened that day in 1993. If your sole goal in reading the book is to find out what happened, don’t read it, you’ll be disappointed. I think the publisher wasn’t quite honest in pushing exactly that narrative, and this is one reason I don’t think the book is worth 5 stars.

However, it is a fascinating portrait of one of the many faces of South Africa.
Meer lezen
8 mensen vonden dit nuttig
Vertaal recensie in het Nederlands

Technophile
5,0 van 5 sterren Wonderful writing, intriguing subject
4 oktober 2016 - Gepubliceerd op Amazon.com
Geverifieerde aankoop
This is not only one of the best books I've read on South Africa (& I've read plenty), but one of the best books I've read recently, period. (And no, I'm not a friend of the author's, nor did I receive a free copy!) With an open mind, an open heart and an ever-open notebook, Justine van der Leun, an outsider, manages to capture the texture of contemporary South African life, with all its confusing and heart-breaking contradictions, better than just about anyone I can think of. And her reinvestigation of the Amy Biehl case is a real eye-opener and reality check, even for those of us who are familiar with that story (or thought we were). What drives this narrative is the author's attention to detail, her curiosity, her compassion, and the vivid cast of characters she introduces us to. Wonderful writing, to be savored for its own sake.
Meer lezen
7 mensen vonden dit nuttig
Vertaal recensie in het Nederlands
Ga naar Amazon.com om alle 67 recensies te bekijken 4,1 van 5 sterren
Terug naar boven
Over ons
Verkoop bij ons
We helpen je graag
© 1996-2020, Amazon.com, Inc. en dochterondernemingen