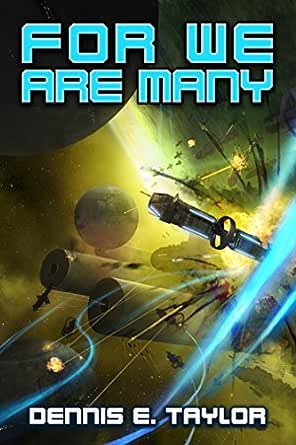 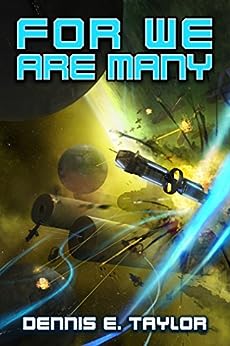 For We Are Many (Bobiverse Book 2) (English Edition) Kindle-editie

Bobiverse fans: a signed limited edition of all three books in a boxed set, signed by the author, is now available on Amazon. Look for The Bobiverse [Signed Limited Edition] on Amazon

Bob Johansson didn't believe in an afterlife, so waking up after being killed in a car accident was a shock. To add to the surprise, he is now a sentient computer and the controlling intelligence for a Von Neumann probe.

Bob and his copies have been spreading out from Earth for 40 years now, looking for habitable planets. But that's the only part of the plan that's still in one piece. A system-wide war has killed off 99.9% of the human race; nuclear winter is slowly making the Earth uninhabitable; a radical group wants to finish the job on the remnants of humanity; the Brazilian space probes are still out there, still trying to blow up the competition; And the Bobs have discovered a spacefaring species that sees all other life as food.

Bob left Earth anticipating a life of exploration and blissful solitude. Instead he's become a sky god to a primitive native species, the only hope for getting humanity to a new home, and possibly the only thing that can prevent every living thing in the local sphere from ending up as dinner.

strinetx
5,0 van 5 sterren Bobiverse is real!
21 april 2017 - Gepubliceerd op Amazon.com
Indeling: Kindle-editieGeverifieerde aankoop
A good first novel is refreshing, but the second is always a test of whether a writer is good or just lucky. "We Are Many" show that Taylor's Bobiverse is not a fluke, and that he is a writer able to capture the audiences attention. The plot elements are often a little hard to keep track of as the Bobiverse fragments and expands, but the stories are compelling, unique and have legs. I look forward to more, whether in the Bobiverse or elsewhere.
Meer lezen
51 mensen vonden dit nuttig
Vertaal recensie in het Nederlands

Kindle Customer
5,0 van 5 sterren Great story!
20 april 2017 - Gepubliceerd op Amazon.com
Indeling: Kindle-editieGeverifieerde aankoop
I honestly just wish it was longer.
I found no problems with this book and can't dock it a star just because I want more.
I recommend this book to those that love good sci-fi.

David Affleck
5,0 van 5 sterren Intelligent Space Opera for the thinking reader.
30 april 2017 - Gepubliceerd op Amazon.com
Indeling: Kindle-editieGeverifieerde aankoop
Bravo sir. This is a brilliant second book that left me looking at everything else in my reading queue and going "meh". It took me a couple of days to get around to actually picking up something else as I knew there was nothing else pending that would be remotely as good.

As I just noted in my review of the first installment, the author has done an amazing job of crafting a story where the reader cares more about the Von Neumann machines than the people. While the people are an essential plot element they are very much secondary and far less interesting in spite of their being adequate fodder there for several conventional, and far less interesting, books.

The evolution of the "Bobs" continues to be fascinating and the "Others" provides a necessary plot device for encouraging further growth in that community as the book progresses.

I'm very much looking forward to the next installment.

Sheryl
5,0 van 5 sterren Fantastic sequel- Get the audiobook
2 mei 2017 - Gepubliceerd op Amazon.com
Indeling: Kindle-editieGeverifieerde aankoop
Loved it! Listened to it on audio and cannot recommend it highly enough. Audio is the way to go with this series. Ray Porter narrates it perfectly. He captures the essence of each and every "Bob" and delivers the humor in a perfect manner. The story is fun, funny, exciting and at times, even touching. I love all of the "Bobs" senses of humor. This is not a book to read as a standalone. You definitely need to read book 1 first, but that's not a hardship as that one is fantastic too.

If you like your sci-fi with humor, I highly recommend this series. And I recommend it even more on audio. You can buy the kindle book and the audible version for less than $10 I think. That's a steal!
Meer lezen
11 mensen vonden dit nuttig
Vertaal recensie in het Nederlands

Reasonable Reviewer
4,0 van 5 sterren The Dark between the Stars in the Bobiverse
22 april 2018 - Gepubliceerd op Amazon.com
Geverifieerde aankoop
The first book in the Bobiverse was cute and spoke to the inner geek in many of us that wanted to explore, defend, and create. It was exciting, fresh, and extremely upbeat.

This book explores the musty attic of the Bobiverse.

There is more drama, and the tone is decidedly **darker**.

Nothing is really resolved in this book either. Even the things that you initially think will be resolved end up being uncertain at best.

That said, Dennis Taylor is a good writer, and the narrator is exceptional.

This book explores the neurosis of the Bobs. One Bob falls in love with a human woman. One Bob eventually commits suicide. One Bob plays God and becomes morose when rejected by the species he hopes to elevate. Some of the Bobs become sociopaths and refer to humans (and all biological life forms) as "empherials."

You get the dark side of things. Clearly some of the Bobs want to experience life as a living, breathing, sensing creature again, and a lot is made of the android project.

We meet the evil replicants from Brazil again, and the reader thinks that the Bobs have wiped out this threat when it is revealed that they will be "the 'Snidley Whiplash' twirling their mustache in every episode."

The book further explores the Others. We first met their mega-ant-robots in the first book,but by the end of this book the Bobs have so annoyed the Others that they announce their intention to destroy Earth and the Bobs' primary colony stars. Quite frankly, the Others seem like a monolithic threat that the Bobs cannot possibly beat by the end of this book. There are some weaknesses though. The species has confined itself to one star system, and there is one central Queen without competitors. If the Bobs can devise a way to destroy the central hive then all will be well except for the annoying Brazilian shadow threat.