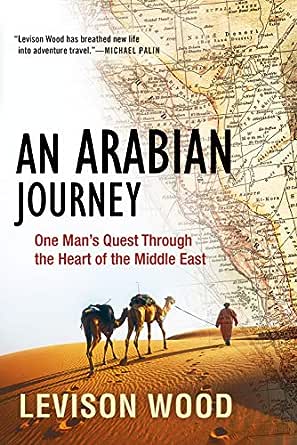 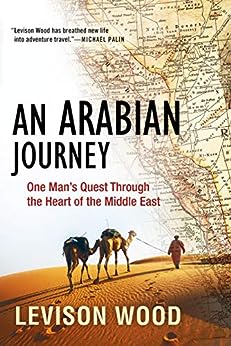 An Arabian Journey: One Man's Quest Through the Heart of the Middle East (English Edition) Kindle-editie

Following in the footsteps of famed explorers such as Lawrence of Arabia and Wilfred Thesiger, British explorer Levison Wood brings us along on his most complex expedition yet: a circumnavigation of the Arabian Peninsula.

Starting in September 2017 in a city in Northern Syria, a stone’s throw away from Turkey and amidst the deadliest war of the twenty-first century, Wood set forth on a 5,000-mile trek through the most contested region on the planet. He moved through the Middle East for six months, from ISIS-occupied Iraq through Kuwait and along the jagged coastlines of the Emirates and Oman; across a civil-war-torn Yemen and on to Saudia Arabia, Jordan, and Israel, before ending on the shores of the Mediterranean in Lebanon. Like his predecessors, Wood travelled through some of the harshest and most beautiful environments on earth, seeking to challenge our perceptions of this often-misunderstood part of the world. Through the relationships he forges along the way—and the personal histories and local mythologies that his companions share—Wood examines how the region has changed over thousands of years and reveals a side of the Middle East we don’t often see in the media.

At once a thrilling personal journey and a skillful piece of cultural reportage, Arabia is a breathtaking chronicle of an epic journey through the land at the root of all civilization.

Brian Helmke
4,0 van 5 sterren A fine summer read
20 maart 2019 - Gepubliceerd op Amazon.com
Geverifieerde aankoop
While not as fluid or adventurous as his other works, still a fine read nonetheless. Tackling the subject of the Middle East from western eyes bent on objectivity was no easy task.
Meer lezen
Vertaal recensie in het Nederlands

Mia
4,0 van 5 sterren Great trip
8 februari 2019 - Gepubliceerd op Amazon.com
Levison Wood is a masochist of first order. But the best kind, the highly entertaining kind. The guy walks places (places one wouldn’t really walk or even think of walking) and then writes his walking adventures down. I loved walking the Nile with him, well I sat here, he walked, I read about it, fun was had by all. And the man is no stranger to some seriously inhospitable and difficult to navigate environments, but he might have outdone himself with this trek. Notice this book isn’t titled Walking the Arabia but an Arabian Journey, since some cars or other quadrupedal modes of transportation were utilized. Some places you just can’t walk, though the man tries. Arabia (a destination name far dreamier than Middle East), it seems holds a special sort of appeal to the author, it isn’t his first journey there, but this one was undertaken is such a dangerous time to be in the region. Nevertheless, he perseveres and even manages to hit every target he sets out for himself and this book is a result. And it’s good, but was it worth risking his life for…I’m not sure. It’s enlightening, because it offers perspectives of regular people caught up or stuck in irregular circumstances. At times it’s practically war reporting. And Wood stays notably unbiased as a reporter trying to present as many varied perspectives as he can from many different sides. But it doesn’t really teach a reader who isn’t familiar with the region’s complex politics all that much and it doesn’t really offer enough to change or make up minds. I’m relatively knowledgeable on the subject, having read up on it, taken a class on it and regularly following the news and reading articles, so I suppose I expected or was hoping for more…more to learn. But where the book may not explain the situation to those outside of the know, it certainly does a great job of humanizing it, which is no small feat for such a foreign (to westerners) culture. The thing is though you just can’t help thinking that there is a streak of masochism or some sort of obsession behind Wood’s travels. I’ve encountered a version of this in myself in my need to finish every book, no matter how crappy that book may be. But Wood, of course, takes that to an entirely new level. Although he does seem to come to a sort of realization during this trip that maybe his extreme traveling days are over, but time will tell. Frankly, I wouldn’t be surprised if he finds another wild and crazy journey to undertake in a near future. The man is, after all, obsessed. This book is good, very good (it’s only some historical facts short of great) and I’d definitely recommend it to all the armchair travelers out there. Disappointingly, hugely so, the ARC version had no photos and his books always have photos, so that won’t be available until the print version. Just so you know.
Meer lezen
7 mensen vonden dit nuttig
Vertaal recensie in het Nederlands
Ga naar Amazon.com om alle 9 recensies te bekijken 3,9 van 5 sterren
Terug naar boven
Over ons
Verkoop bij ons
We helpen je graag
© 1996-2020, Amazon.com, Inc. en dochterondernemingen