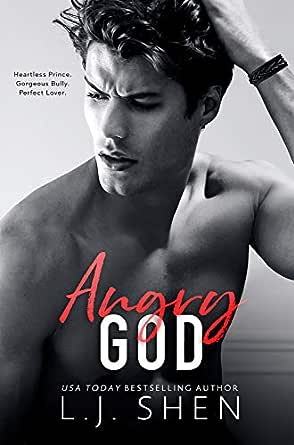 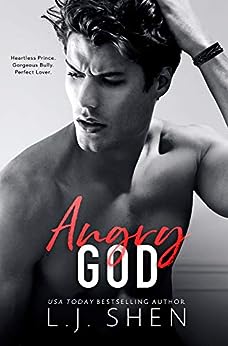 Vanessa
5,0 van 5 sterren Get ready to be owned, wrecked and ruinned by L.J. SHEN AT HER BEST!!
16 februari 2020 - Gepubliceerd op Amazon.com
Geverifieerde aankoop
ANGRY GOD IS ONE OF THE BEST BOOKS OF ALL TIME, it got so deep in my soul, reached the most hidden places in my heart and ruined me forever, I still feel it in every fiber of my being. The plot is captivating, gritty, dark, so intense, with such deep anguish that leaves you breathless, wow, I couldn't put it down.

The characters are UNIQUE! My Vaughn is..., I have no words, his personality fascinates me, a character so complex as I have never read another hero before, his mind is a vast universe full of thoughts that torture him, and he has such a pure heart under his cold outside. Lenny is his perfect complement, sassy and brave, determined and loyal, she is my author's FAVORITE HEROINE to date.

Although at the beginning they can't stand each other, L.J. does a masterful job narrating the evolution of their relationship and the characters, I loved the way in which the author gradually reveals layers and layers in their personalities. Wow! They are the perfect combination, innocent but sexy, vulnerable but strong, hurting but divine.

THEIR ROMANCE IS HEARTBREAKINGLY BEAUTIFUL!! I Ioved their deep and intense connection, their hearts and souls are connected through time and distance! And their scenes dear god, are sooo scorchingly hot, dark but sweet, wow, they took my breath away! Their love story will stay in my heart forever!
And Vicious as dad is the best thing ever!!

The author gives us a masterpiece that is beautifully tragic, emotion overflows in every page, the writing is exquisite, flawless and sexy bordering the dark and decadent. There is something so powerful in L.J. Shen stories, something that mesmerizes you, owns your soul and leaves you speechless. But ANGRY GOD GOES BEYOND EVERYTHING I'VE READ BEFORE, it is an unique experience, a roller coaster of intense and deep emotions.

Get ready to be owned, wrecked and ruinned by L.J. SHEN AT HER BEST!!
Meer lezen
335 mensen vonden dit nuttig
Vertaal recensie in het Nederlands

CourtRocks
1,0 van 5 sterren 1 Bleh Star
22 april 2020 - Gepubliceerd op Amazon.com
Nope, nope, nope. I was so hoping Vaughn would be the redeemer we all needed after the crap fest BK and ITUE was, and unfortunately, it wasn't. This was just as bad, and at this point, I wish LJ had never written this series. All she accomplished was ruining our beloved SOS characters. And based on the last 3 books, including AG, her writing and imagination is only getting worse and worse. She needs new Beta readers ASAP, and not kissa**es like she has now. So sick of hearing "best book of the year" about these last five books, 3 which were terrible.

SPOILERS!!
First, this book is pretty much a negative 2.0 of Vicious. Lenny (Emilia) goes to Todos, sees something they shouldn't of Vaughn (Vicious), gets bullied, and moves far away.Vaughn (Vicious) ends up going there too, more drama while falling in love, all the while planning revenge on someone who abused them. Legit exactly the same. Add in some OW/OM drama, over the top teens, and a crappy romance, and you have Angry God.

This book had so much wrong with it that it's hard to actually decipher it all in my head to write it out. There was no actual reason why they hated each other, literally none. Lenny was an idiot and was never able to stop for a minute and actually think what the secret was that she was supposed to keep. They hated each other almost the entire book, and we had no build up of feelings. Hate, and then WHAM! lovedeachothersomuchtheycouldntbewithout in the next second, made no sense. There was absolutely no chemistry or sparks between them like there was in BK.

There was way too much OW drama, which seems to be the only thing LJ can think of to write nowadays. Lenny is full on bullied, one time she was even attacked, and the same girl who did it, Vaughn let her give him a public BJ at 30%. Then at 60% after they were exclusive, Lenny got back at him by letting her friend go down on her in front of Vaughn. Also the same girl that attacked Lenny, and Vaughn knew about it, he invites into her home where she causes more drama.

Also, LJ didn't put any triggers, and yet there is a FULL CHILD ABUSE SCENE IN DETAIL!! NO WARNING!! This is disgusting. Then again LJ seems to get off on writing sexual abuse and rape scenes but can obviously NEVER write them right. In this book they killed him, but in ITUE they made the rapist a hero? How tf does that make sense? Then again lenny forgives her bullies and neglectful dad in like a day.

LJ made Millie and Vicious dumb too! The audacity! There were so many warning signs of what the molester did to Vaughn, even going as far as him asking Emilia creepy questions about Vaughn, and them almost seeing the abuse, she even knew there was something off. And what does Millie do? She buys his art for millions of dollars (one looking like Vaughn cuz that's not obvious), becomes best friends with him, and even tries to make him partners with her. And how does she figure out he was the molester? She sees a magazine that someone bought all his work and Vicious was in London at the same time. THAT'S IT. You go years with so many signs and turn a blind eye to it, but you figure it all out from a magazine?? Wtf?

Then there is also wannabe-vampire blood crap where Lenny apparently loves to suck Vaughn's blood and gets off on it (this could maybe work if this book was actually a well-written dark book, but it wasn't) And then Vaughn even trying to justify what he has done to Lenny by saying "I bullied her because I love her" and "I got dozens of BJs because it reminded me of her", um okay. Or how he knew Lenny was attacked, and tried to make himself a hero by getting back at them, but then invites the bully to London with them, cuz that makes sense. And the one moment that we all waited for to see who Vaughn brought to the proposal was the bully! Even Daria has heard more about the bully than Lenny, via PR. So no full circle family moment in this book, in fact it seems like she screwed up on the timeline and just threw whatever together to make it seem like she knew what she was doing.

Which actually, that's what this whole book was. Pieces of sh*z that literally made no sense, thrown together and called it a book. She didn't even have her usual humor we all love, it was bullying and hating each other, OW drama, revenge, then all of a sudden fall in love and babies. Nothing special. Actually everything that happened was predicted in the author's readers group, that really shows the creativity put into this book.