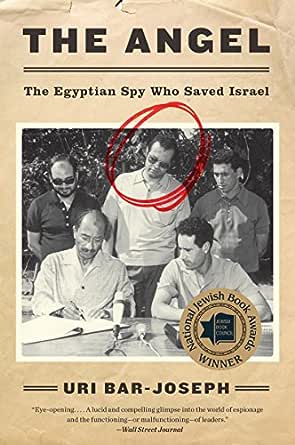 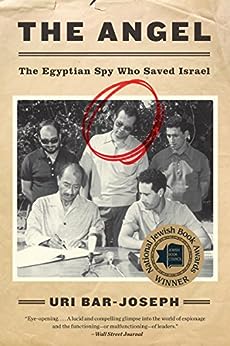 "Trenchant, serpentine.... Packed with jaw-dropping and intimate details.... Bar-Joseph has done a laudable job of synthesizing the voluminous Israeli government information about Marwan, always keeping his eye for some of the outrageous--even absurd--turns of events in a high stakes drama."--New York Times Book Review

"A trenchant account of the career of a master spy."--New York Times Book Review Editors' Choice

"A trenchant, serpentine account of the career of the Yom Kippur mole."--New York Times Book Review, "9 Thrillers (One True) That Times Editors Think You Should Read This Summer"

"This is the best spy story I've ever read--and it's all true. Uri Bar-Joseph weaves a suspenseful tale of the dangerous life--and mysterious death--of a spy who did nothing less than change the course of history in the Middle East. You won't be able to put it down."--Howard Blum, New York Times bestselling author of The Last Goodnight and Dark Invasion

"Eye-opening.... A lucid and compelling glimpse into the world of espionage and the functioning--or malfunctioning--of leaders."--Wall Street Journal

"This is a remarkable story of Israel's greatest spy ever, and an intelligence disaster that almost doomed the state. Deeply reported and powerfully told, The Angel is a must-read espionage saga."--David Hoffman, Pulitzer Prize-winning author of The Dead Hand and The Billion Dollar Spy

"This remarkable book reveals to us a hidden history, showing how little we actually know of events we thought we understood. One of the most exciting--and surprising--books on Israel I've read."--Yossi Klein Halevi, author of National Jewish Book Award winner Like Dreamers

"A fascinating read into the wilderness of mirrors of espionage, with a laser focus on one of Israel's greatest spies.... A tremendous case study for any student of intelligence, geo-politics, or history. The book should be required reading for any special agent or intelligence officer."--Fred Burton, New York Times bestselling author and VP Intelligence, Stratfor

"Ashraf Marwan was the most valuable source the Mossad had ever recruited.... Bar-Joseph's fascinating book is an accurate and reliable account of the career of one of the 20th century's most important spies."--Maj. Gen. (Ret.) Zvi Zamir, Former Mossad Director (1968-1974)

A gripping feat of reportage that exposes—for the first time in English—the sensational life and mysterious death of Ashraf Marwan, an Egyptian senior official who spied for Israel, offering new insight into the turbulent modern history of the Middle East.

As the son-in-law of Egyptian president Gamal Abdel Nasser and a close advisor to his successor, Anwar Sadat, Ashraf Marwan had access to the deepest secrets of the country’s government. But Marwan himself had a secret: He was a spy for the Mossad, Israel’s intelligence service. Under the codename “The Angel,” Marwan turned Egypt into an open book for the Israeli intelligence services—and, by alerting the Mossad in advance of the joint Egyptian-Syrian attack on Yom Kippur, saved Israel from a devastating defeat.

Drawing on meticulous research and interviews with many key participants, Uri Bar Joseph pieces together Marwan’s story. In the process, he sheds new light on this volatile time in modern Egyptian and Middle Eastern history, culminating in 2011’s Arab Spring. The Angel also chronicles the discord within the Israeli government that brought down Prime Minister Golda Meir.

However, this nail-biting narrative doesn’t end with Israel’s victory in the Yom Kippur War. Marwan eluded Egypt’s ruthless secret services for many years, but then somebody talked. Five years later, in 2007, his body was found in the garden of his London apartment building. Police suspected he had been thrown from his fifth-floor balcony, and thanks to explosive new evidence, Bar-Joseph can finally reveal who, how, and why.

Andy H. Cr.
5,0 van 5 sterren Swans don’t swim in sewers
16 september 2018 - Gepubliceerd op Amazon.com
Geverifieerde aankoop
The above statement is supposedly used by CIA case officers to indicate that their agent networks are often composed of unsavory characters who have betrayed their countries for less than pristine reasons. The exact motives of Egyptian government official Ashraf Marwan for offering his services to Israel are most certainly a mixture of various concerns, but this book maintains that he really liked the money they paid him. He also had every reason to hate his father-in-law Egyptian president Gamal Abdel Nasser who viewed him as a corrupt opportunist. This situation is worth considering since this book is being made into an upcoming spy thriller by Netflix, which, according to Time magazine, portrays Marwan as an idealistic hero. I guess we call that dramatic license.

The book itself is an excellent study by an Israeli scholar who has a background in military intelligence. Unfortunately he does not have full access to many relevant files which have not yet been declassified, so this work has to be considered tentative until additional source materials become available. It is still probably the very best book on this subject that we are going to see for quite some time. If you are interested, I have a 1300 word essay on this book coming out in a Forthcoming edition of Parameters: the US Army War College Quarterly.
Meer lezen
13 mensen vonden dit nuttig
Vertaal recensie in het Nederlands

Mal Warwick
4,0 van 5 sterren The chilling tale of a remarkable episode in Israeli history
20 september 2016 - Gepubliceerd op Amazon.com
Indeling: Kindle-editieGeverifieerde aankoop
The history of the state of Israel is one of continuous war punctuated by intermittent stretches of peace. The open military conflicts the young nation has experienced have always threatened its continuing existence, but none more so than the Yom Kippur War in 1973. Never before and never since has Israel come closer to annihilation.

In The Angel: The Egyptian Spy Who Saved Israel, the Israeli political scientist Uri Bar-Joseph tells the little-known tale of Ashraf Marwan. This son-in-law of President Gamal Abdel Nasser and close adviser to his successor, Anwar Sadat, was also a spy for the Mossad. Marwan’s reports to his handler enabled the Israeli Defense Force to recover from the surprise of the initial Egyptian and Syrian attack and soon turn the tide.

A remarkable episode in Israeli history

Marwan’s story is astonishing. As a supremely ambitious young man, he married Nasser’s daughter. Marwan made the mistake of misjudging his father-in-law. When the puritanical president learned that Marwan was using his position to enrich himself, he cast the young man adrift. Bar-Joseph speculates that Marwan’s desire to exert revenge on Nasser led him to offer himself as an informant for the Mossad.

The making of an Egyptian spy

Nasser died in 1970 when Marwan was just 26 years of age. He cleverly maneuvered himself into the good graces of Anwar Sadat by undermining the Nasserite faction during the confusion when the country’s new leadership was in question. In short order, Marwan became Sadat’s personal representative to other Middle Eastern leaders, including King Faisal of Saudi Arabia and President Moammar Gaddhafi of Libya. These connections, and his closeness to Sadat, enabled him to amass a large personal fortune while reporting to the Israelis on a regular basis.

Marwan’s reports in the early 1970s frequently reached the desk of Prime Minister Golda Meir. But he was not universally regarded as reliable within the Israeli intelligence community. In fact, for the rest of his life there were those in the Israeli military intelligence leadership who maintained that Marwan was a double agent, placed to mislead Israel at important junctures. It was this skepticism that led several key Israeli leaders to disregard several of Marwan’s early warnings of the impending Egyptian-Syrian attack. Only on the day of the attack itself was his last, desperate message heeded at the highest levels. Though it came only hours before the Egyptians crossed the Suez Canal, the warning time was sufficient for the IDF to avoid catastrophe.

Bar-Joseph explains at great length how distrust of Marwan came to be so widespread not just in the Israeli government and military but among the public as well. The head of military intelligence when the Yom Kippur War broke out had rejected Marwan’s report of the imminent attack—and for decades afterward he insisted in press interviews and in a widely read book that Marwan was a double agent. Bar-Joseph details the evidence refuting the double agent hypothesis and makes clear that Marwan’s chief critic was motivated by a desire to avoid blame for his failure to act on the warnings he received. Little wonder, since his stubborn refusal to accept reality was one of the most shameful acts in Israeli history.

Uri Bar-Joseph is an Israeli political scientist who has written the definitive book on the intelligence failures that caused his country to come close to losing the Yom Kippur War. The Angel focuses on the role of the intelligence establishment’s relationship with the spy whose reports were decisive in enabling an Israeli victory.
Meer lezen
15 mensen vonden dit nuttig
Vertaal recensie in het Nederlands

The Angel is a remarkable book -- the result of deep research into one of the most fascinating spy stories ever....reads like a thriller. Bar Joseph story telling ability - extracted from interviews and documents - is outstanding. As someone who actually participated in the Yom Kippur war, I could not stop reading. Many lessons to be learnt from both historical accounts as well as human nature so skilfully analysed and described. This is a must read whether you like history, thrillers, intelligence, spy stories or even if you are looking for a fascinating read while on the beach.
Meer lezen
28 mensen vonden dit nuttig
Vertaal recensie in het Nederlands

Thomas Einstein
3,0 van 5 sterren An amazing story!
28 december 2017 - Gepubliceerd op Amazon.com
Indeling: Kindle-editieGeverifieerde aankoop
The information in this book is astonishing. In an academic fashion the author has painstakingly footnoted his work to convince the reader of his conclusion that Ashraf Marwan, Nasser's son in law and Sadat's confidant, was a pivotal secret agent for Israel. Overall, the information is fascinating, but I give it only 3 stars because the narrative got bogged down in endless repetition in support of the author’s assertions. I made it through the book motivated to discover Marwan’s fate, but I would have enjoyed the book more had it been more concise. Anyone interested in 20th century middle eastern history and Arab-Israeli relations will want to read this book.
Meer lezen
5 mensen vonden dit nuttig
Vertaal recensie in het Nederlands

The Angel is not the sole attraction of the text. The writer introduces the politics of Egypt. That world is neither idealistic, nor is it a "film noir" world. Western readers expect individual desires for power or greed to influence policy. But in much of the world, the individual is less important than family, rank and contacts. The descriptions of Egypt under Nassar and Sadat are fascinating.
Meer lezen
3 mensen vonden dit nuttig
Vertaal recensie in het Nederlands
Ga naar Amazon.com om alle 97 recensies te bekijken 4,4 van 5 sterren
Terug naar boven
Over ons
Verkoop bij ons
We helpen je graag
© 1996-2020, Amazon.com, Inc. en dochterondernemingen