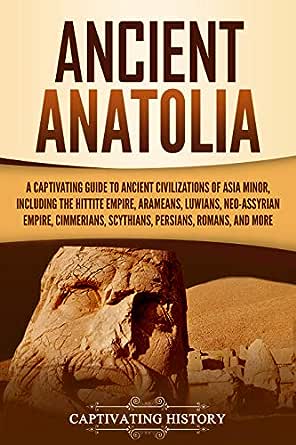 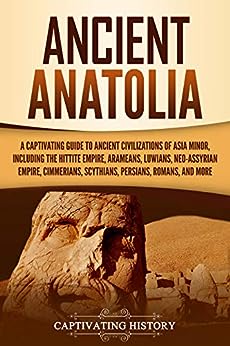 If you want to discover the captivating history of ancient Anatolia, then keep reading...

What sparks curiosity about ancient Anatolia, which makes up most of modern-day Turkey, in the minds of history lovers is the diversity of its peoples throughout its territories and time. This book seeks to present the most current view on the events that unfolded through the centuries of the Bronze and Iron Ages of Anatolia. The reader can follow the rise of some of the most famous empires in the world, as well as learn about the circumstances that led to their fall. From early settlements of nomadic tribes to the creation of vast empires, Anatolia changed its face numerous times throughout history. Not just territories and kingdoms changed, but the people inhabiting it also did so as well, in their language, culture, and religion.

Even though they were faced with a lack of evidence for certain periods of ancient Anatolia, or for certain peoples, historians seek to accurately paint the picture of the lives in all the various kingdoms of Anatolia. This book follows the Hittite Empire in its rise and fall. It discusses the Arameans and the influence of their culture on the civilized world, as well as the influence of the Luwians and their dispersion throughout Anatolia. Even if they were never able to organize a united Luwian Empire, they changed all the kingdoms they came in contact with. The effects of this ancient civilization can still be felt today as certain dialects of the Luwian language still exist in Anatolia.

In Ancient Anatolia: A Captivating Guide to Ancient Civilizations of Asia Minor, Including the Hittite Empire, Arameans, Luwians, Neo-Assyrian Empire, Cimmerians, Scythians, Persians, Romans, and More, you will discover topics such as
So if you want to learn more about ancient Anatolia, scroll up and click the "add to cart" button!
click to open popover

Terry Mulcahy
5,0 van 5 sterren The Beginning of the Modern World
17 januari 2020 - Gepubliceerd op Amazon.com
Geverifieerde aankoop
I found many facts in this history which explained why this area of the world, which is in the news quite often today, developed to be the mixture of many different people from varied backgrounds which make up the population of the Middle East of today.
Meer lezen
Vertaal recensie in het Nederlands

JJares
5,0 van 5 sterren Anatolia Has an Amazing, Long, and Varied History
30 november 2019 - Gepubliceerd op Amazon.com
Anatolia, also known as Asia Minor, the Anatolian peninsula or the Anatolian plateau, takes up most of modern-day Turkey.  This story generally starts with the Hittites (an ancient group of Indo-Europeans) of the Late Bronze Age moving into the Anatolian area.  They formed an empire in about 1600 BCE.  Much of their wealth was tied up in the trade routes, so they had to protect them at all costs.

The Hittites were masters of chariot warfare.  They were pagan, with a pantheon of storm-gods where they offered their fealty.  Because their succeeding kings had more-or-less skills than the one before, the Hittites were expanding and contracting over the centuries.  Finally, the Hittites were conquered by the Assyrians, who assimilated them by 705 BCE.

The next major group is the Aramean Confederation, a Semitic people (from Syria), organized in small, independent, nomadic kingdoms spread out over much of the Middle East and south-central Turkey.  The Arameans (as well as the Hittites) are mentioned in the Bible.  This book also mentions that Saul, David, and Solomon fought against Arameans.  The Assyrians often fought against the Arameans, finally conquering Aramean lands and deporting Arameans to Babylonia and Assyria.

Luwians used their own hieroglyphic script.  The people using this script and speaking a Luwian language lived and roamed (nomads) across Anatolia during the Bronze and Early Iron Age in Asia Minor and northern Syria.  The Hittites saw the Luwians as enemies and waged war against them.  They captured the Luwians and used them as slaves and pressed labor.  Although the Luwians were assimilated, the Hittites had a policy of incorporating gods (from their captured groups) into their own religious system.  Thus, the Luwians' gods had an impact on the Hittites' belief system.

The Neo-Assyrian Empire was the largest empire in the world for 300 years of the Iron Age.  Aramaic was the official language because of the Assyrian's habit of moving newly conquered peoples to the nucleus of the empire.  The Assyrians were famous for their powerful (and dangerous) armies.  They are important because they conquered much of the Middle East and Egypt.  The Assyrians were brought down in 612 BCE by the Babylonians.

This book now turns to the Cimmerians, a nomadic Indo-European people, that are generally thought to be of the Scythian culture.  There's little known about this group of people.  Records indicate they arrived at about 1000 BCE.  They are mentioned again later in Assyrian records at the end of the 7th century BCE.  It is believed they settled in Cappadocia.

It is believed that the Scythians are of Iranian stock because their language is a branch of the Iranian language.  From the harsh environment of the Steppes, Scythians were wonderful horsemen and were the bane of infantry enemies.  Women fought beside men in the Scythian armies.   Their lifestyle was one of the pastoral nomad.

The ancient Persians were nomads of Iranian heritage.  The Achaemenid Empire was founded by Cyrus the Great.   At its apex, this empire spanned three continents.  The Persian Empire lasted about 200 years until Darius III was defeated by Alexander the Great.

When Alexander died, his kingdom wallowed in indecision for 40 years. Alexander's empire was cut into four parts and the Seleucid Empire was founded in 312 BCE.  The Armenian king Tigranes the Great invaded the Seleucid Empire in 83 BC, but they were ultimately overthrown by the Roman general Pompey in 63BCE.

This book shows how there was a constant flow of people (usually in conflict with each other) in Anatolia.  The land was routinely overrun with differing religions, languages and ethnic groups.  I think it will be fascinating when DNA testing can be routinely done in archeology sites, to provide more insight into the origins of some of these little-known ethnic groups.

This is a semi-joke: I sometimes wonder if the authors are in a race to see who can write the longest title for their book. One day soon, the title will be as long as the book.

Kindle Customer
5,0 van 5 sterren One of the important areas in ancient history.
1 december 2019 - Gepubliceerd op Amazon.com
This area in the ancient world was the home to many different nations over the course of the centuries, the Hittites, the Persians together with a number of smaller kingdoms that have been lost to the sands of time. If you read the book "The Egyptian" by Mika Waltari then during the course of the story you will be introduced to characters from them. (A thoroughly recommended read if you haven't heard of it) They existed at the same time as the great Egyptian Empire and to understand how Egypt prospered for such a long period of time it is necessary to understand its place in connection with these other countries. This small book is packed with information although it contains little of the general life of the people of these countries. Instead, it deals with the rise and fall of these countries as they prospered and declined. If this is a period of history that interests you then, then you will find this book invaluable.
Meer lezen
Een iemand vond dit nuttig
Vertaal recensie in het Nederlands

Clau
5,0 van 5 sterren Another great book
2 december 2019 - Gepubliceerd op Amazon.com
An in-depth view of those civilizations that occupied the lands that today constitutes Turkey. I really enjoyed the way in which we are introduced to the different civilizations, to the way in which they interacted with each other, and their strengths and contributions to the world.

Told in an interesting way, this is an exciting reading for every history buff :P

I received an ARC of this book and this is my voluntary and honest review.
Meer lezen
Een iemand vond dit nuttig
Vertaal recensie in het Nederlands

Dennis W.
5,0 van 5 sterren Ancient Civilizations of Anatolia – Enjoyable Book
2 december 2019 - Gepubliceerd op Amazon.com
This land of Ancient Anatolia , also now known today as Turkey has had an interesting and rich past. This bookcovers
the history of The Hittites and their excellent chariot creation and handling, The Assyrians and the intermixing of the
two, thus the Hittites are conquered by assimilation this book will introduce you to many cultures like the
Babylonians, Scythian's, Persians and their beliefs that are revered in the beginning but were modified by
assimilation. This land has always been in conflict, always will be,and I have always enjoyed the books..