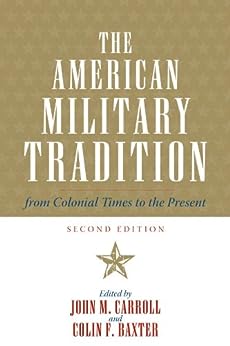 In The American Military Tradition historians John M. Carroll and Colin F. Baxter gather an esteemed group of military historians to explore the pivotal issues and themes in American warfare from the Colonial era to the present conflict in Iraq. From the reliance on militia and the Minutemen of the American Revolution to the all-volunteer specialized troops of today, these twelve essays analyze the continuities and changes in the conduct of war over the past three centuries. In this completely revised second edition, new essays explore Napoleonic warfare, the American Civil War, the Plains Wars in the West, the War against Japan, the nuclear arms race, and the War on Terror. The book, while not avoiding the nature of battle, goes beyond tactics and strategy to include the enormous social and political impact of America's wars.
click to open popover