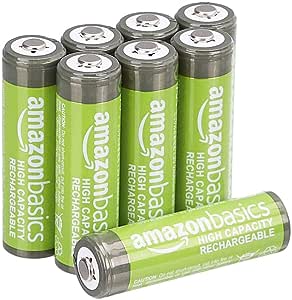 Peter A. Hogg
1,0 van 5 sterren Destroyed Everything
9 september 2018 - Gepubliceerd op Amazon.com
Geverifieerde aankoop
If you look at the images I've posted you can see how these batteries totally came apart not only in the lights they were in but they destroyed the charger too. The photo showing the end of the light fixture using the set of the Amazon batteries were in, I could not get the batteries out as they had come apart so badly internally. Buy at your own risk but think that Amazon should stop selling these as they are the worse rechargeable batteries they have and they are their own.
Meer lezen

Ulises Rodriguez
2,0 van 5 sterren I have a big disappointment with these AmazonBasics Rechargeable Batteries!!
12 april 2018 - Gepubliceerd op Amazon.com
Geverifieerde aankoop
I have always had great luck with any Amazon Basics product, but unfortunately this has been my first disappointment.

Although these batteries are supposed to be the top of the line from Amazon and description of product clearly states that batteries come pre-charged... Unfortunately, after only a few days of using them, I found the following:

3 of these AAA batteries, fails to accept the initial charge, and do not charge at all after several attempts with different types of chargers (La Crosse, Sony and AmazonBasics)!

3 of these AAA batteries, very hardly accept the first charge... They take too long to reach 100% charge!... But after charging them, they discharge themselves without used it... Unfortunately these batteries do not maintain the charge and their voltage drops to 1.0 volt or less in 4-5 days and without using them!

2 of these batteries charge and work perfectly well!

However, although I received these batteries on March 27, I did not complain before, because I wanted to try for several days how each of these batteries behaved after charging them....

But unfortunately, I have already verified that these Rechargeable Batteries are not really top quality as stated in the product description!

I'm not sure if I received a bad batch product, but I have a big disappointment with these AmazonBasics Rechargeable Batteries!

The only 2 of these 8 batteries that worked perfectly well from the beginning and that did not lose their charge, now have also started to fail !!

I immediately decided to complain to Amazon about the dubious quality of these rechargeable batteries and they fortunately gave me a full refund of my order!

NLee the Engineer
5,0 van 5 sterren Identical to the Sanyo eneloop XX - at much lower cost
7 juli 2014 - Gepubliceerd op Amazon.com
Geverifieerde aankoop
I have previously tested the AmazonBasics AA Pre-Charged Rechargeable Batteries (in white wrappers), and concluded that they are just rebranded Sanyo eneloop AA Batteries. When I first heard about the new AmazonBasics High-Capacity Pre-Charged Rechargeable Batteries, my immediate suspicion is that those are rebranded Sanyo eneloop XX batteries. That's why I purchased this product for testing, just to satisfy my own curiosity.

I measured a set of those AmazonBasics 'high-capacity' AA batteries, using my La Crosse BC1000 Battery Charger/Analyzer. Here are my findings:

- Right out of the box, the average remaining charge was 1204mAh, or 48% of the rated 2500mAh capacity. Date code on them says '2014-02', but just like other eneloop batteries, they were not fully charged when then left factory.

- After just one recharge/discharge cycle, the average capacity jumped to 2547mAh.

- After another two more recharge/discharge cycles, the average capacity settled at 2555mAh. The spread is very tight between 2510 and 2610mAh, which indicates good quality control.

The above behavior is nearly identical to that of the Sanyo XX cell, which I have previously tested in 2011.

Mechanically, the AmazonBasics high-capacity cells appear identical to the Sanyo XX. Refer to the photo I uploaded to the 'Customer Images' section, and you will see that they have exactly the same shape for positive terminals, same texture on their wrappers, even down to the same 'vent hole' design.

I should note that the Duracell 'Ion Core' AA Rechargeable Batteries also have identical electrical and mechanical characteristic as the Sanyo XX and AmazonBasics High-Capacity batteries. The Duracell batteries are marketed as just 2400mAh, even though they were tested to be over 2500mAh in capacity. I believe this is done for price differentiation purpose.

Bottom Line:
As of this writing, you can get an 8-pack of Amazon High-Capacity AA batteries for less cost than a 4-pack of eneloop XX batteries. So obviously the AmazonBasics version is a great bargain. My advice is to grab them - before Amazon gets greedy and jacks up the price.

One important note:
The AmazonBasic High-Capacity AA (or Sanyo XX, or Duracell Ion Core) is fatter than a normal-capacity NiMH AA cell, which itself is fatter than a typical alkaline AA cell. So it may not fit if your appliance has extremely tight battery compartment.

[Update on Dec 10, 2014]
Long-term self-discharge data: Tested one pair of AmazonBasics AA high-capacity batteries after 5 months in storage. The average remaining charge is 2175mAh, or 85% of the original capacity. This is even better than my previous 5-month test result for Sanyo XX batteries which showed 2040mAh, or 78% of original capacity.
Meer lezen

Mark Hitomi
1,0 van 5 sterren They cannot possibly be Eneloop. Started failing after 15 cycles.
12 maart 2018 - Gepubliceerd op Amazon.com
Geverifieerde aankoop
I purchased these batteries in 2014. I use them for my Simple Human motorized trash can. I would charge them around once every 3 months. In the last 6 months, I noticed that some of the batteries started to fail. Today all but two batteries are working. I have Eneloop batteries from the Sanyo days and they continue to work. Some of the reviews say they these are identical I them. Maybe the batches they tested were but definitely not mine. BTW Eneloop uses their own proprietary technology of NiMH which makes them last very long. Some of these Amazon reviews eg NLee the Engineer concluded that these are the same which does not hold true for me. Regardless these batteries should not fail after 15 cycles of charging.
Meer lezen
214 mensen vonden dit nuttig
Vertaal recensie in het Nederlands