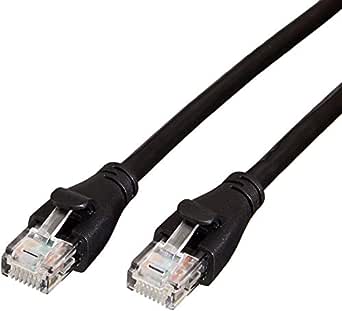 SuperTed
3,0 van 5 sterren I Don't Have That Warm and Fuzzy Feeling
7 april 2019 - Gepubliceerd op Amazon.com
Maat: 15,24 mStijlnaam: Enkele verpakkingGeverifieerde aankoop
As some reviewers have pointed out, the Title of the item says Cat6 but if you look at the description it only says "Transmits data at speeds up to 1,000 Mbps (or to 1 Gigabit per second)". Further, other reviewers have pointed out that the connectors are not Cat6 connectors, but Cat5e connectors. After doing further research let me see if I can dispel some of these inaccuracies made by these other reviewers.

First, Cat6 cables are really only CERTIFIED at 1 gig (1,000 Mbps), but are able to support up to 10 gig (10,000 Mbps) at lengths 37 meters or less. Cat5e cables are really only CERTIFIED at 100 mbps, but can support up to 1 gig. Notice the use of the word "CERTIFIED" - I think this is where the confusion is regarding cable ratings. I believe this is what the manufacturer ACTUALLY means from their description stated above - that the cable is CERTIFIED at 1 gig, not that its maximum rating is 1 gig. Think of CERTIFIED as "guaranteed". The official spec for Cat5e and Cat6 GUARANTEE 100 Mbps and 1000 Mbps, respectively, but can support more (it's just not guaranteed).

Secondly, the connectors on this cable are not actual Cat6 connectors (see the pictures by other reviewers), but Cat5e connectors. However, the official spec says that the different Cat6 connector is only a RECOMMENDATION, not an actual requirement for a Cat6 cable. Simply put, Cat6 cables have the option to go with Cat6 connectors or can use the Cat5e connectors as long as the cable maintains the rating of a Cat6 cable. So just because it doesn't have the official Cat6 connector, doesn't mean it's not a Cat6 cable. Making a determination by looking at the connectors is not a sure fire way to tell if a cable is Cat6. Reviewers stating it is NOT a Cat6 cable based on the connectors are incorrect. The only way to truly tell if you are getting a Cat6 cable or not is to test with a network tester - something regular home owners don't have and aren't willing to drop another $75 to $300 dollars for. Cable manufacturers are basically on the honor system when it comes to their cables. If you want to feel warm and fuzzy about your cables, then buy from a known and trusted cable provider. Monoprice comes to mind but there are many others.

Thirdly, these cables are thin and while there is no AWG (American Wire Gauge) printed on the cables themselves or listed in the description, I believe these to be 28 AWG. I have numerous 24 AWG at my house and these Amazon Basics cables are clearly thinner. The higher the AWG, the thinner (or, smaller diameter) the wire. So a 24 AWG will feel "thicker" than a 28 AWG. Also, 28 AWG is a ratified spec for a network cable and was designed mostly to conserve space and increase airflow in IT rooms with crowded network racks and cable runs used by businesses with tens, hundreds or thousands of devices that need a wired connection. The regular homeowner doesn't even come close to this. However, 28 AWG has more signal resistance (the longer the wire) because it's thinner so it's recommended to keep 28 AWG wires at a length of 15 meters (roughly 50 feet) or less. Again, most homeowners probably don't have this issue and shouldn't worry about it.

So, with all that being said above I ultimately returned these cables and here's why: I don't like it when I don't have that warm fuzzy about something I buy. I THINK these are Cat6 28 AWG network cables but I'm not absolutely sure. If the manufacture had listed more DETAILED specs and had a more clear description then maybe I would have kept these. Also, almost all of the network cables I buy have the the AWG listed on the cable itself along with the Cat type and some other details. These cables only have "Cat 6 Cable" listed on it. That's it. Nothing else. So if I'm trying to determine the gauge of a wire I need to know the differences between the types of AWG - something most regular people don't know and which I had to do to write this review. I'm a stickler for accuracy and being CLEAR about communicating your product. I should have read the other reviewers BEFORE I pulled the trigger on these. Instead, I got wowed by the price and didn't due my due diligence.

Will these work for you? Absolutely. Before I sent these back they were working for me. Most homeowners won't even need to worry about going over 1 gig speeds so whether this is a Cat6 cable or actually a Cat5e, most won't even know the difference. But I'm OCD about this stuff so don't let my review necessarily dissuade you from buying these. Use it as guide to become better informed and to be able to discern between reviews that are accurate and reviews that are CLEARLY misinformed because they don't have all the information about cabling specs and are just shooting from the hip.
Meer lezen
321 mensen vonden dit nuttig
Vertaal recensie in het Nederlands

Nitro
1,0 van 5 sterren READ THIS!
30 december 2018 - Gepubliceerd op Amazon.com
Maat: 1.5 m / 5 voetStijlnaam: pak van 5 stuksGeverifieerde aankoop
Listen up people looking for more speed! If you want more speed from your modem to your router then from your router to your components, CALL YOUR CABLE COMPANY! Bottom line, CAT5e can provide 1 gig of speed, easily! I have gig speed service (comcast) and this CAT6, my CAT7's and even the new CAT8 ALL work the same! Not one iota of extra speed "upgrading" from 5e to 6- 7 or 8! Here's another reason not to spend unnecessary money on "CAT 6-7-8". Guess what comes in a gig speed $300-$500 router box? CAT5e!!!
Meer lezen
156 mensen vonden dit nuttig
Vertaal recensie in het Nederlands

Amanda
3,0 van 5 sterren Cover prevents connection from clicking into place
27 februari 2018 - Gepubliceerd op Amazon.com
Maat: 3 m / 10 voetStijlnaam: Enkele verpakkingGeverifieerde aankoop
The rubber/plastic cover on each end covers too much of the RJ45 housing. The cover sticks out and prevents the clip from clicking into place in some receptacles. Essentially, the plug isn't able to go in far enough to click the clip in place.

I was able to connect it to my switch just fine, but the device on the other end wouldn't connect. I was able to take an exacto knife to the cover and strip back enough of the cover to make it work (see photo).

Faraz Shakir
4,0 van 5 sterren Good Cables with an annoying design flaw
12 augustus 2018 - Gepubliceerd op Amazon.com
Maat: 1.5 m / 5 voetStijlnaam: pak van 5 stuksGeverifieerde aankoop
First of all these are cables so not much that can go wrong. The cables themselves look good and feel well built.

With Amazon being a leader of data centers, you would thing they would design the perfect network cable, unfortunately there is an annoying design flaw.

The jacks are surrounded by a thick rubber which makes it hard to squeeze them into tight spaces. You can force them, but they start to lean and I was concerned that this would damage the ports on my router.

The fix is pretty simple, luckily the material is rubber and not hard plastic. I took a sharp knife and was able to whittle away the excess rubber.

Now my custom modified cables fit as they should.

Check out my images, the 4 cables on the switch are modified, the one cable at the end is untouched because I had enough room there that it didn't matter.

but you can see the difference.

I hope that Amazon addresses this issue as it's a great product otherwise.
Meer lezen

Sarah G
1,0 van 5 sterren This is NOT a Cat6 cable
27 februari 2019 - Gepubliceerd op Amazon.com
Maat: 3 m / 10 voetStijlnaam: Enkele verpakkingGeverifieerde aankoop
Just because it says on the cable that it's a Cat6 doesn't mean that it actually is. Cat6 pins are staggered while these are straight.
Meer lezen