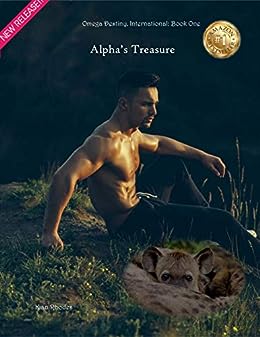 What was supposed to be a one night stand turned into three amazing days and then the Omega disappeared.

Violated by the very people who should have protected him, Jeremy is scared, pregnant, and on the run. An Omega alone with no money and no one to help him, hunted by those who want to take his baby for their own purposes.

A bounty hunter by trade, Kade is a loner, an Alpha who long ago decided that the rigorous social structure of a clan were not for him. Then he accepted a job, hunting down a missing pregnant Omega in the hills of Pennsylvania. It wasn't until he received a picture of the Omega in question, that he suddenly realized he might have a personal tie to the case.

Jeremy
My jaw dropped as I stared at the vision before me, my fingers itching to touch the shaggy auburn hair. My jacket dropped forgotten to the floor as I took one step toward him, stopping when I saw an odd glittering in his amber eyes.
“Kade?” I nearly choked on his name, my brain fritzing as it tried to reconcile how the sexiest Alpha I’d ever met, the star of every dirty fantasy that had sustained me through the long, horny months and flash heats of my pregnancy with only my hand for company ended up lying in front of me. “Are you..what are you doing here?”
“What am I doing here?” Kade’s voice was harsher than I remembered as he mocked me. “What do you think I’m doing here, Jeremy?” he asked, a slight snarl in his tone as his eyes dropped to my round tummy. “You have something that belongs to me.”

Kindle Customer
5,0 van 5 sterren Yes!
16 november 2019 - Gepubliceerd op Amazon.com
Geverifieerde aankoop
Ok I will admit I was sad to see the end of the Omega Auction/ Rescue/ Blood Valley Investigations books, but this book is a great start to the new series! There were enough cameos of characters from the other series that it didn't really feel different and yet it still had enough new that it was it's own story not a continuation of the others! I am sooo looking forward to the next parts of this story! Kian Rhodes has done it again, she never disappoints!
Meer lezen
2 mensen vonden dit nuttig
Vertaal recensie in het Nederlands

SE
5,0 van 5 sterren In love again! Soooooo good!
8 december 2019 - Gepubliceerd op Amazon.com
Geverifieerde aankoop
Been waiting for another story from Kian Rhodes and this is it! Love Jem and Kade, Jem is a feisty, strong omega and Kade is a sexy, romantic alpha. Between all the shenanigans in the story the author brings in characters from The Omega Auction series and totally decimated my heart! Read this story on my KU and then of course bought it cause it’s from one of my favorite authors! 🥰
Meer lezen
Een iemand vond dit nuttig
Vertaal recensie in het Nederlands

andrew doughty
5,0 van 5 sterren The start of a series you will Treasure
20 november 2019 - Gepubliceerd op Amazon.com
Geverifieerde aankoop
On the heels of Kian's Omega Rescue series comes Omega Destiny, International. Time to leave the sleepy Blood Valley and 'shift' to new locales with new characters and new stories to tell. (with some familiar cameos)
Alpha's Treasure finds bounty hunter Kade hired to find an Omega. What he really finds is a shadow from his past, a cross country flight for safety and a challenge for his future. Excitement and romance ensue!
Read book1 of Omega Destiny, International - Alpha's Treasure.

Kindle Customer
5,0 van 5 sterren Great start on a new series
12 januari 2020 - Gepubliceerd op Amazon.com
Geverifieerde aankoop
This may be book one but characters from the Omega Rescue series make small appearances. You do not need to have read any of those books to enjoy this story as it is a stand alone. This is the story of a couple of hyena shifters that hook up and walk away only to come together months later. There is danger and love and the birth of a little girl. I enjoyed this book so much that up look forward to more on the series.
Meer lezen
Vertaal recensie in het Nederlands