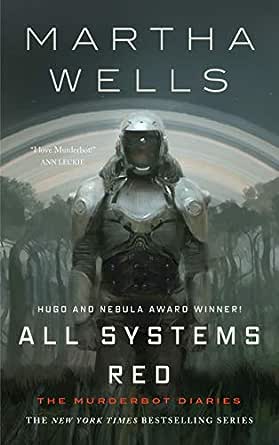 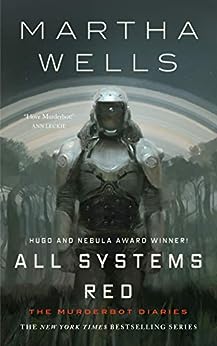 Praise for The Murderbot Diaries series

"The Murderbot series is a heart-pounding thriller that never lets up, but it's also one of the most humane portraits of a nonhuman I've ever read. Come for the gunfights on other planets, but stay for the finely drawn portrait of a deadly robot whose smartass goodness will give you hope for the future of humanity." --Annalee Newitz, author of Autonomous

"We are all a little bit Murderbot... we see ourselves in its skin. And that reading about this sulky, soap-opera-loving cyborg killing machine might be one of the most human experiences you can have in sci-fi right now.."--NPR

"Clever, inventive, brutal when it needs to be, and compassionate without ever being sentimental." --Kate Elliott, author of the Spirit Walker trilogy

"Endearing, funny, action-packed, and murderous." --Kameron Hurley, author of The Stars are Legion

"Not only a fun, fast-paced space-thriller, but also a sharp, sometimes moving character study that will resonate with introverts even if they're not lethal AI machines." --Malka Older, author of Infomocracy

"Wells gives depth to a rousing but basically familiar action plot by turning it into the vehicle by which SecUnit engages with its own rigorously denied humanity." --Publishers Weekly starred review

"I already can't wait for the next one." --The Verge

A murderous android discovers itself in All Systems Red, a tense science fiction adventure by Martha Wells that interrogates the roots of consciousness through Artificial Intelligence.

"As a heartless killing machine, I was a complete failure."

In a corporate-dominated spacefaring future, planetary missions must be approved and supplied by the Company. Exploratory teams are accompanied by Company-supplied security androids, for their own safety.

But in a society where contracts are awarded to the lowest bidder, safety isn’t a primary concern.

On a distant planet, a team of scientists are conducting surface tests, shadowed by their Company-supplied ‘droid — a self-aware SecUnit that has hacked its own governor module, and refers to itself (though never out loud) as “Murderbot.” Scornful of humans, all it really wants is to be left alone long enough to figure out who it is.

But when a neighboring mission goes dark, it's up to the scientists and their Murderbot to get to the truth.

At the Publisher's request, this title is being sold without Digital Rights Management Software (DRM) applied.

Grimm
1,0 van 5 sterren A bold-faced con-job!
23 januari 2019 - Gepubliceerd op Amazon.com
Geverifieerde aankoop
This is a bold-faced con-job! Take one big novel, split it into four novellas, charge three bucks for the first one and ten for each of the next three. That’s the kindle price btw, so $33 for an aprox. 650 page novel. It’s a decent story, but I feel like a chump for buying it.
Meer lezen
89 mensen vonden dit nuttig
Vertaal recensie in het Nederlands

WildCat13
1,0 van 5 sterren Just say no!
19 februari 2019 - Gepubliceerd op Amazon.com
Geverifieerde aankoop
OK $3.99 novella (really really short) but to continue with the series you will need to pony up $10 per novella.

$10 is way too much for what's essentially a short story.

Well they drove something, me and my family away from this money-grabbing author/series. We'll either borrow it for free or just move on to better, more appropriately priced fiction.

Regarding the actual content it's OK not-great. So many holes in the story it's crazy making it hard to enjoy. .
Meer lezen
42 mensen vonden dit nuttig
Vertaal recensie in het Nederlands

Jarrett Noble
1,0 van 5 sterren Entertaining story but the high cost for partial installments cancels any benefits. Read the wiki.
18 februari 2019 - Gepubliceerd op Amazon.com
Geverifieerde aankoop
The story is actually pretty entertaining; a little cookie cutter like but the writing is well done
However the larger problem is cost. It's $40 to read the 4 novellas. So yeah you're going to pay $40 for the functional equivalent of 1 complete story that was separated into 4 parts within 18 months of the first part. Objectively this is a poor attempt at a cash grab to ream readers pocket books. And people lament the death of the written word...

I have no problem supporting authors with paying for books. I do have a problem throwing money for installments that don't complete until you have paid your way through. This is the functional equivalent of Activision and EA charging money for content on video games that should have already been in the game. And it's not working out so well for them these days.

J. Lesley
5,0 van 5 sterren Murderbot, don't stay gone too long.
31 mei 2017 - Gepubliceerd op Amazon.com
Geverifieerde aankoop
An excellent story with a level of characterization difficult to achieve in only 160 pages. Murderbot was a well developed character with traits which quickly made me interested in finding out how it was going to handle the situation it was in. Very engaging to watch it become more aware of its humans on their space exploration mission. I got a good chuckle to find that Murderbot withdrew from the noisy, emotional, overwhelming world of the humans by watching feeds of entertainment programs.

The ending for this segment was a very good setup for more stories to come. I was a little apprehensive about the length of the story because I have been disappointed by short stories and novellas in the past because they never fully engaged my emotions. I didn't need to worry about that with this story by Martha Wells and I am definitely looking forward to reading the continuing adventures of this Imitative Human Bot Unit.
Meer lezen
65 mensen vonden dit nuttig
Vertaal recensie in het Nederlands
Ga naar Amazon.com om alle 1.255 recensies te bekijken 4,5 van 5 sterren
Terug naar boven
Over ons
Verkoop bij ons
We helpen je graag
© 1996-2020, Amazon.com, Inc. en dochterondernemingen