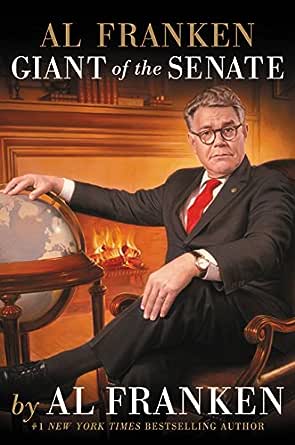 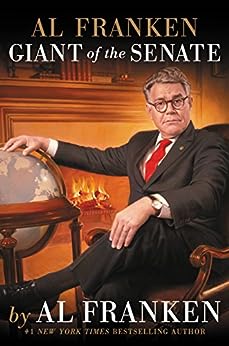 "Admirably incautious...Franken has weaponized the gifts that proved so useful for comedy - a sharp eye, a sharper tongue, the ability to tease out the essential absurdity of a given situation and deliver the goods with maximum impact."--Mark Binelli, Rolling Stone

"The best political book of 2017."--Alex Shephard, The New Republic

"This is a great book about politics. No joke...Compulsively readable [with] laugh-out-loud lines in every chapter."--Booklist Starred Review

"In a breezy, funny, biting, and often earnest read, Franken pulls off what many of his congressional colleagues have failed to do: write...an interesting and honest memoir."--Sam Brodey, MinnPost.com

"With this book, Franken is both resistance leader and family counselor...A hilarious guide to what happens when a comedian runs for Congress."--The Nation

"In this excellent, insightful memoir, comedian turned senator Franken recalls his unlikely path to public service...Franken is quite a raconteur, and he tells the story of his remarkable life and times with a sense of humor that is always irreverent and often self-deprecating."--Publishers Weekly

"[AL FRANKEN, GIANT OF THE SENATE] may...be the funniest memoir by a sitting - standing, recumbent, squatting - U.S. senator. Scratch that 'may.' It surely is. This is a genuinely funny book, often hilarious...the Senate, and the country, would be the poorer without him. He's an American original."--Christopher Buckley, The Washington Post

"A fun and compelling book. [Franken] uses self-deprecating humor to poke fun at everyone on either side of the aisle, and he gives readers insight into the daily workings of life in the Senate. His love of the people and the state of Minnesota is crystal clear."--Jeff Ayers, AP

#1 New York Times Bestseller
"Flips the classic born-in-a-shack rise to political office tale on its head. I skipped meals to read this book - also unusual - because every page was funny. It made me deliriously happy." - Louise Erdrich, The New York Times
From Senator Al Franken - #1 bestselling author and beloved SNL alum - comes the story of an award-winning comedian who decided to run for office and then discovered why award-winning comedians tend not to do that.

This is a book about an unlikely campaign that had an even more improbable ending: the closest outcome in history and an unprecedented eight-month recount saga, which is pretty funny in retrospect.
It's a book about what happens when the nation's foremost progressive satirist gets a chance to serve in the United States Senate and, defying the low expectations of the pundit class, actually turns out to be good at it.
It's a book about our deeply polarized, frequently depressing, occasionally inspiring political culture, written from inside the belly of the beast.
In this candid personal memoir, the honorable gentleman from Minnesota takes his army of loyal fans along with him from Saturday Night Live to the campaign trail, inside the halls of Congress, and behind the scenes of some of the most dramatic and/or hilarious moments of his new career in politics.
Has Al Franken become a true Giant of the Senate? Franken asks readers to decide for themselves.

Amazon Customer
5,0 van 5 sterren Aweseome
3 juni 2017
Indeling: Kindle-editie
I love Al Franken's "Giant of the Senate" for its wit, insight, information and analysis. It comes with "Why the Trump Presidency May End up Well After all" as my books of the week on American politics.
Meer lezen
Nuttig
Commentaar geven Misbruik melden
Vertaal recensie in het Nederlands
Alle 1 klantenrecensies bekijken
Klantenrecensie schrijven

BankChick
5,0 van 5 sterren Great Read!
10 juli 2017 - Gepubliceerd op Amazon.com
Geverifieerde aankoop
Great Book! Living in DC, our local news is mainly national politics, so I'm burned out on the bi-partisan BS and was unsure if reading this book would just make me mad. It didn't. Franken is a great writer, and his perspective is one that I enjoy. I found it quite interesting to hear about his initial run and enjoyed hearing about his day-to-day interactions with his colleagues (I use that term loosely). It is heartening to learn that we have at least one Congress Person who has a conscience and takes their job seriously. And it made me laugh.
Meer lezen
15 mensen vonden dit nuttig
Vertaal recensie in het Nederlands

This book is an anecdotal, autobiography by democratic Senator Al Franken from Minnesota. It contains brief snippets of his childhood, his time with Saturday Night Line (SNL), both his campaigns for Senatorial office and finally some revelations surrounding the 2016 Presidential Election and its aftermath; things that have resulted in some unpredictable and unprecedented consequences.

Al Franken was first and foremost a comedian, and this trait comes shining through in this book. No matter the point in time being discussed or the seriousness of any given situation, humor in the form of a witty retort or funny thought is never far from his mind.

Is the book well written... well, yes and no. It is an basically an extensive anecdotal account of events that have occurred, plus some side remarks that may add some detail or color (often humorous). So this limits the ability and opportunity to write skillful prose. And in truth, if this had a professionally quality to the writing it probably would have lost some of its appeal and the honesty that I came to feel towards this book, and by association, this man.

One got the feeling that while reading this book that either Al Franken was continually tooting his own horn OR he was the rarest of all breeds, a politician that had some moral conviction, and the desire and stamina to fight for what he believes is right. My instincts and hopes lean me towards the latter.

I came away feeling that the Democratic Party could do a lot worse than having Senator Al Franken as their party’s Presidential nominee in 2020.

The book is informative and entertaining... 5 Stars.

abunaiyo
5,0 van 5 sterren Entertaining, enlightening and bittersweet
19 december 2017 - Gepubliceerd op Amazon.com
Geverifieerde aankoop
Overall a wonderful and entertaining read, especially if you share Mr. Franken's political views. Having read the book after Mr. Franken's resignation from the U.S. Senate, there is definitely a bittersweet, melancholy mood infusing his words. It is clear that he truly enjoyed serving as a senator representing the people of Minnesota, and he took his responsibility seriously and passionately. After years as an comedy writer, entertainer, and political pundit, he at last found a higher calling, one that motivated him to reinvent himself and provided him great job satisfaction. As a U.S. Senator, he learned to be more serious and respectful in order to avoid being cast as the clown of the Senate. Despite his desire to make flippant remarks (as his previous self), he discovered the concept of "dehumorization" which is mentioned throughout the book.

His political observations are razor sharp and laugh-out-loud hilarious as in his previous books as a political pundit, but this time with more credibility as he was writing as a full-fledged U.S. senator. He sheds interesting light on the inner workings of the U.S. Senate, as well as the day to day grind he went through. His observations of his fellow senators are enlightening. His stories about Ted Cruz are particularly funny. But rather than just blasting the Republicans as he did in previous books, he also illustrates the importance of working across the aisle with fellow senators. I particularly enjoyed reading which senators he liked working with, and which ones he would rather avoid at all costs. The descriptions and anecdotes he shares are not to be found in most newspapers or magazines.

It is bittersweet that he had to resign from the job that has given him the greatest satisfaction of his life. But his words, often funny, and always insightful, make "Giant of the Senate" a worthwhile read for progressives.
Meer lezen
4 mensen vonden dit nuttig
Vertaal recensie in het Nederlands

Stephen H. Karten
5,0 van 5 sterren although I expected to like this book
19 juli 2017 - Gepubliceerd op Amazon.com
Geverifieerde aankoop
Very informative, enjoyable, and well written. I'm a long time fan of Al Franken. And, although I expected to like this book, I was surprised at how much I enjoyed it, and how informative it is. In my opinion, all comedians have an edge to their personalities and in some cases, on a deep level, are really angry people. I've always felt that Mr. Franken falls into the category of having that bit of an edge. But, being that way myself, I understand and forgive it. I just think he doesn't suffer fools and hypocrisy well at all...to say the least. It does show up in this book, but not in an angry, or belligerent way. I'm also grateful for a number of his explanations of the "nuts and bolts" of how the US Senate works. In addition to being entertained, I learned quite a few things. It also set me wondering about what the future might hold for him. Some have said he might be in considering a run for the Presidency in 2020. I, for one, had dismissed this. However, this tome, has me thinking.....
Meer lezen
5 mensen vonden dit nuttig
Vertaal recensie in het Nederlands

Mimi Wolske
5,0 van 5 sterren Might Well Be "a marquee Democratic leader"
10 oktober 2017 - Gepubliceerd op Amazon.com
Geverifieerde aankoop
Horsepucky!
What to say after thousands have read and reviewed that would be different and make you want to read it?
No, the book is not horsepucky, but I hope I got your attention.
This is one of the better political autobiographies I’ve read; it was honest, blunt, LOL funny, informative, personal, and it even had photos and one drawing. BTW, Al Franken draws and more than just a map of the USA.
If you want to know about running for office in this day and age, Al has some input. He can also tell you who knows where to get the best Tuna Sandwich in Wash., D.C. (now, that’s humor).
IF you don’t buy it, then go to your library and borrow it to read (and write your review). You’ll be glad you did, either way.
I hate RATING books...a review should be enough on its own without some elementary grading system
Meer lezen
5 mensen vonden dit nuttig
Vertaal recensie in het Nederlands
Ga naar Amazon.com om alle 3.286 recensies te bekijken 4,8 van 5 sterren
Terug naar boven
Over ons
Verkoop bij ons
We helpen je graag
© 1996-2020, Amazon.com, Inc. en dochterondernemingen