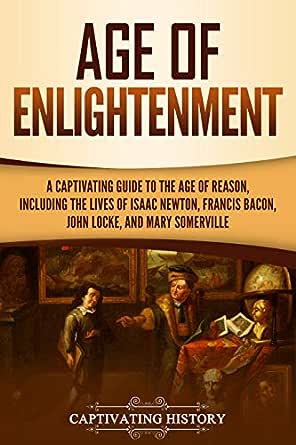 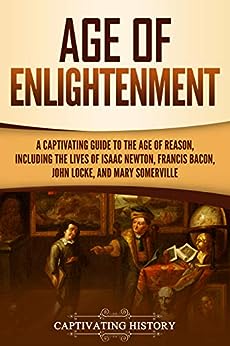 Age of Enlightenment: A Captivating Guide to the Age of Reason, Including the Lives of Isaac Newton, Francis Bacon, John Locke, and Mary Somerville (English Edition) Kindle-editie

If you want to discover the captivating history of the Age of Enlightenment, then keep reading...

The life of an eminent scientist during the Scientific Revolution and the ensuing Enlightenment was not easy. Ambitious people were killed in the name of the Catholic Church for their scientific and philosophical works, which were often viewed as heretical. As time went on, however, and the truths of scientific research and exploration showed themselves time and time again, the collective perspective of the population began to shift away from religious dogma toward the logical scientific method.

The Enlightenment gained traction in the 17th century, and more emphasis was given to scientific techniques in the schools, as well as to the separation of religious and scientific data. Religious philosophies also became less rooted in the exact words of the Catholic Church, as papal authority gave way in many European countries to splinter groups of Christianity, such as the Calvinists, Lutherans, and other types of Protestants.

Major figures of the Enlightenment period include Voltaire, Isaac Newton, John Locke, Thomas Hobbes, David Hume, Jean-Jacques Rousseau, Adam Smith, Immanuel Kant, and Thomas Jefferson. These and many other great thinkers of the era influenced mass social upheaval in pursuit of equality and human rights, and many historians consider the culmination of these efforts to have been the French Revolution of 1789.

In Age of Enlightenment: A Captivating Guide to the Age of Reason, Including the Lives of Isaac Newton, Francis Bacon, John Locke, and Mary Somerville, you will discover topics such as
So if you want to learn more about the Age of Enlightenment, scroll up and click the "add to cart" button!
click to open popover

JJares
5,0 van 5 sterren Clear and Succinct Writing About An Important Age
9 november 2019 - Gepubliceerd op Amazon.com
This book makes a valuable point that the European Renaissance began in the 1300s; the Scientific Revolution occurred in the 1500s and the Age of Enlightenment evolved in the 1700s.  It also states that as science became more important, it shook the ground around religion, particularly the Catholic Church.  The author indicates that the Age of Reason (Enlightenment's other title) came to fruition in the new constitutions of both the Americans and the French.

The authors have taken the time to give some biographical sketches of some of the more-popular (Rene' Descartes and Francis Bacon, for example) and less well-known practitioners of philosophical inquiry.  I knew that philosophers and scientists and hobbyists had informal writing connections with each other.  I was not aware of the "Republic of Letters" or (the  women's version called) "Famille d'Alliance."  These were formal writing 'round robins' that people shared their ideas and study pursuits.  The person highlighted that bowled me over, however, was Anna Maria van Schurman.  She was the first woman of the Netherlands (and probably Europe) to earn a college degree.  She was a polyglot, a polymath and earned a law degree. I am in awe of her learning and how she used her intelligence.  Don't miss chapter 7.

Until reading this book, I did not know that Franklin was an extremely wealthy man by the time of the American Revolution. The American Enlightenment occurred because those Republic of Letters found their way across the ocean to people like Thomas Jefferson, Benjamin Franklin, and Thomas Paine.  As the French continued to starve, freeze and be unable to care for themselves, the idea of governance by the people began to make more sense to people like Voltaire.

This book is great because it shows how different thinkers affected the whole of France, England, and the New World.  We still see evidence of their teachings in our institutions and attitudes about scientific endeavors, religious tolerance, and separation of church and state.  This is a highly readable treatise on the Age of Enlightenment.

Kindle Customer
4,0 van 5 sterren Great Introduction to a wide range of characters
10 november 2019 - Gepubliceerd op Amazon.com
This a wide topic to cover in such a small tome but it succeeds admirably in introducing the main players who pushed forward with their thinking to change the world in opposition to the Catholic Church.

Some of these characters you will know and others you may not. Certainly, there has been a multitude of books that go into each in more detail. Yet there are some that may have passed under the radar. One thing that I particularly appreciated was that there were free thinkers and intellectuals who were women and history does not spend enough time on their contributions in comparison with their male counterparts. This introduced me to these women of whom I would like to know more.

Bevan
4,0 van 5 sterren Wide-ranging
11 november 2019 - Gepubliceerd op Amazon.com
This is wide-ranging glimpse at a significant period of history - primarily the 17th - 18th centuries - through vignettes of a range of individuals (of both genders) who made significant contributions to how the world operates today.
How much quicker would 'civilisation' have advanced without the over-powering influence of Catholicism and the irrelevance of religion?
Some interesting, brief biographies - including some you may never have heard of previously....