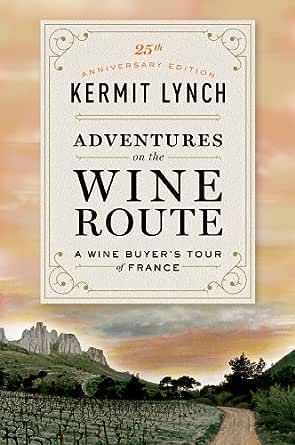 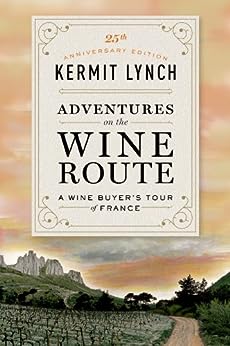 When Adventures on the Wine Route was first published, Victor Hazan said, "In Kermit Lynch's small, true, delightful book there is more understanding about what wine really is than in everything else I have read." A quarter century later, this remarkable journey of wine, travel, and taste remains an essential volume for wine lovers. In 2007, Eric Asimov, in The New York Times, called it "one of the finest American books on wine," and in 2012, The Wall Street Journal pro-claimed that it "may be the best book on the wine business."

In celebration of its twenty-fifth anniversary, Adventures on the Wine Route has been thoroughly redesigned and updated with an epilogue and a list of the great wine connoisseur's twenty-five most memorable bottles. In this singular tour along the French wine route, Lynch ventures forth to find the very essence of the wine world. In doing so, he never shies away from the attitudes, opinions, and beliefs that have made him one of our most respected and outspoken authorities on wine. Yet his guiding philosophy is exquisitely simple. As he writes in the introduction, "Wine is, above all, about pleasure. Those who make it ponderous make it dull . . . If you keep an open mind and take each wine on its own terms, there is a world of magic to discover." Adventures on the Wine Route is the ultimate quest for this magic via France's most distinguished vineyards and wine cellars. Lynch draws vivid portraits of vintners—from inebriated négociants to a man who oversees a vineyard that has been in his family for five hundred years—and memorably evokes the countryside at every turn. "The French," Lynch writes, "with their aristocratic heritage, their experience and tradition, approach wine from another point of view . . . and one cannot appreciate French wine with any depth of understanding without knowing how the French themselves look at their wines, by going to the source, descending into their cold, humid cellars, tasting with them, and listening to the language they employ to describe their wines."

Here, Kermit Lynch assures a whole new generation of readers—as well as his loyal fans—that discussions about wine need not focus so stringently on "the pH, the oak, the body, the finish," but rather on the "gaiety" of the way "the tart fruit perfume[s] the palate and the brain."

Rondinella
5,0 van 5 sterren Just the best wine book I have read
19 oktober 2019 - Gepubliceerd op Amazon.com
Geverifieerde aankoop
This is simply the best book on wine I have read. Although it was written 25 years ago, Kermit Lynch's profound understanding of wine is still valid today. Words of wisdom interspersed with fun and a wicked sense of humor - what more could one want? All wine professionals (I am one), and anyone who really wants to learn about the nature of wine, should read it.
Other reviewers have commented on the fact that the France he describes is gone; that may be true, but how great to know what it was through this book, and to know what we have lost to a corporatized wine world.
I bought it on Kindle and read it in bits running around during my work day. I am now going to buy the real book and sit down and enjoy it with a glass of wine!
Meer lezen
Vertaal recensie in het Nederlands

C. Gottlieb
4,0 van 5 sterren A Tour de France
9 november 2015 - Gepubliceerd op Amazon.com
Geverifieerde aankoop
This book was really interesting about the wines of France in great deal. It helped me understand the differences in the wine variety, the manufacture and blending of wines and the process. It was interesting to note how the process from fruit to bottle is changing (not necessarily better for the consumer) to improve profit yield and many old time wineries are selling out to huge corporations who have nothing to do with wine making, only money making. This author is a gem in knowledge about the nuances of every variety, the minute detail of the processing and bottling and then shipping wines from France to California.He takes the reader on a tour of France, covering each wine region. Too bad I found this book 2 years after I visited many of the regions he so thoroughly describes. all the more reason to now go back and see it from a wine lover's perspective. I would highly recommend this book if you enjoy wines, what makes the wines we enjoy enjoyable or not. And he speaks about the history of France along the wine route!
Meer lezen
4 mensen vonden dit nuttig
Vertaal recensie in het Nederlands

Lynn Williamson
3,0 van 5 sterren An insider's view of modern wine-making process in France, by a long-time insider.
16 juni 2015 - Gepubliceerd op Amazon.com
Geverifieerde aankoop
Got thru about half of it. Lots of info, but most of it is about winemakers for whom the average reader could only HOPE to meet. I read the book during my trip through Provence, the Chateneuf-du-Pape region and lower Burgundy. I was able to take away a few key concepts, but for the average wine-loving traveler, Kermit Lynch's itinerary is an unobtainable dream. Kermit Lynch writes about his LONG-TIME relationships with individual vintners. He does discuss current practices which adversely affect the quality of estate-produced wines in these regions (on-site bottling that saps the character of the wine, which seems to be ubiquitous in the aforementioned regions) leading me to believe that most of the so-called Burgundy and Chateneuf-du-Pape appellations are nothing more than patrimony designed to preserve the status quo, but not the quality of the product. Despite my take-away and incomplete reading I'd still recommend.
Meer lezen
3 mensen vonden dit nuttig
Vertaal recensie in het Nederlands

mrthinkndrink
4,0 van 5 sterren That was then...
30 september 2016 - Gepubliceerd op Amazon.com
Geverifieerde aankoop
Who doesn't love Kermit? Mr. Lynch has done much for the American wine scene. He was a pioneer in finding and bringing world-class French wine to America. Without his presence our wine world would be much less compelling. Kermit Lynch is to be thanked for his passion and his contribution to wine in America. That said, his famed collection of stories and tales does show its age. Unfortunately, time has relegated Adventures on the Wine Route to a historical footnote. Realizing that he redefined the relationship between an importer and his catalog, many of the writings found in this seminal volume are a bit old and frayed. It's a wistful look at a wine world that really doesn't exist anymore. Good when it was here, but we've moved beyond. Thanks, Kermit, for everything you've done.
Meer lezen
Een iemand vond dit nuttig
Vertaal recensie in het Nederlands

studebhawk
5,0 van 5 sterren A Love Story on Wine
26 mei 2014 - Gepubliceerd op Amazon.com
Geverifieerde aankoop
Written by a wine professional, Kermit Lynch wrote an ode to the fine art of wine making for us all to enjoy. In the process, he wrote of a time and place in France that has changed dramatically 25 years later. His French contacts are the small family owned vineyards that produce high quality, small yield old growth wine using the old French traditional methods. In the update written for the 25th anniversary edition, he brings us up to date with some of the characters we loved from the original edition. He regrets the passing of his old friends and, with it, the old school methods and traditions of traditional French winemaking. He regrets the profusion of the mass produced wine that we get today using short cut methods to produce large volumes of wine devoid of that signature French “taste”.
In “Adventures on the Wine Route”, Kermit Lynch wrote an ode to a way of life in French wine, of a time and place that was special and in so doing he wrote a love story for us all.
Meer lezen
4 mensen vonden dit nuttig
Vertaal recensie in het Nederlands
Ga naar Amazon.com om alle 36 recensies te bekijken 4,6 van 5 sterren
Terug naar boven
Over ons
Verkoop bij ons
We helpen je graag
© 1996-2020, Amazon.com, Inc. en dochterondernemingen