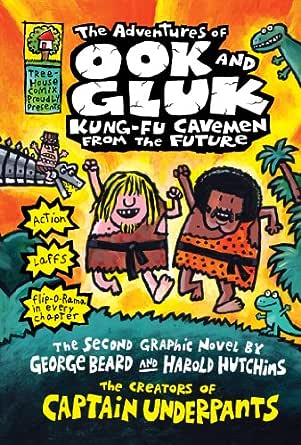 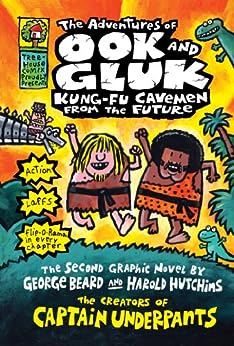 Tra-la-laaa! The wait is over! Dav Pilkey--ahem--we mean, George Beard and Harold Hutchins, the bestselling authors of THE ADVENTURES OF SUPER DIAPER BABY, are back with their second graphic novel!Meet Ook and Gluk, the stars of this sensationally silly graphic novel from the creators of Captain Underpants! It's 500,001 BC, and Ook and Gluk's hometown of Caveland, Ohio, is under attack by an evil corporation from the future. When Ook, Gluk, and their little dinosaur pal Lily are pulled through a time portal to 2222, they discover a future world that's even more devastated than their own. Luckily, they find a friend in Master Wong, a martial arts instructor who trains them in the ways of kung fu. Now all they have to do is travel back in time 502,223 years and save the day!

Jessica Blanton
1,0 van 5 sterren AWFUL SPELLING
30 mei 2018 - Gepubliceerd op Amazon.com
Geverifieerde aankoop
My children love the Captain Underpants books- oh my gosh this book takes it to a whole other level. It made my brain hurt just trying to read all the misspelled words in it. I would not want my children reading this and thinking its ok to spell or write like this.
Meer lezen
28 mensen vonden dit nuttig
Vertaal recensie in het Nederlands

Abby123
5,0 van 5 sterren Great For the Child Who Loves Captain Underpants
7 januari 2018 - Gepubliceerd op Amazon.com
Geverifieerde aankoop
I bought this book for a child who loves Captain Underpants and has read all of the Captain Underpants books. He said that he read it and loved it. He told me that it was funny and a good read. I know that he must be telling the truth because it is now being passed among all of his friends to read. None of them had ever heard of this book before.
Meer lezen
8 mensen vonden dit nuttig
Vertaal recensie in het Nederlands

Heather
5,0 van 5 sterren Cute, fun for all ages
14 december 2019 - Gepubliceerd op Amazon.com
Geverifieerde aankoop
I don't make any secret that I really love Dav Pilkey's books. People willing to see past the crude drawings and seemingly childish humor often find a story with heart and WAY more diverse characters than I ever knew were in these books.

What's The Adventures of Ook and Gluk [...] about? What it says on the tin: Two cavemen living in prehistoric Ohio get into shenanigans. They begin the story by irking their chief (here, ofc, spelled cheif) Goppernopper, as he and his "gards" direct them back to their respective houses to be chided, he falls in love with Ook's sister, Gak. He demands she marry him, otherwise bad things will happen to Ook and Gluk, and Gak agrees, seeing no possible other way to help them.

Luckily our heroes are a little more savvy. They plan to disrupt Gak's wedding and run off Gopernopper for good. They succeed, due heavily to Mog Mog, a t-rex they've been antagonizing most of their lives. As Goppernopper leaves the village and contemplates just how much he can't stand Ook and Gluk, he runs into a lot of big machines tearing down trees and bottling the water, and thus meets his descendant future!Goppernopper.

future!Goppernobber explains to original recipe Goppernopper that they invented a time machine to come back and clean the older world out of resources since the future is dying and has no fresh resources. f!Goppernopper takes ORGoppernopper to the future to see this distasterousness and ORGoppernopper suggests one teensie improvement: taking his former villagers and enslaving them.

Both Goppernoppers go back to the past with mechanical dinosaurs and tell the residents that, surprise!, you've got a fantastic job opportunity working for Amazon of the distant future. Of course Ook and Gluk don't stand for it, and they escape, along with Mog Mog's child with who they've made friends, and go from the year 500,001BC to 2222AD to stop the Goppernoppers and have adventures.

And I loved every second. One thing I really like about some YA/MG/Children's books is that I get to shut down and not think critically, but not in a bad way. Just "stop! Let the author tell the story!" way. That happens here, although I did go "but messing up the resources of the past will DEFINITELY mess up the resources of the future! Unless this is a stable time loop... Or that messing up the past is what CAUSES the future to be so wonky!" But I'm also completely aware that the book isn't meant to be taken so seriously or have such an intricate plot.

It's meant to get little kids reading with humor on their level (and a few jokes for the older readers slipped in; peep the "speak like a caveman" section), and I think it does a wonderful job. Yeah, the art and grammar may be crude, but I've always thought that nothing had to be absolutely perfect to be enjoyable.

I eagerly look forward to Dav Pilkey's future releases, I got almost a whole collection of his and I consider it money and time well spent, and if you give his books a try, you can knock one out in an hour.

Laurie
5,0 van 5 sterren Funny kid humor
17 november 2016 - Gepubliceerd op Amazon.com
Geverifieerde aankoop
My third-grader thinks this book is hysterical. Granted it has some potty talk and some people might think it's not setting a very good example. As a parent of a reluctant reader however I don't really care about that and I'm glad that he finds it funny and wants to read it. He's probably written at a second grade level but it's perfect for us.
Meer lezen
10 mensen vonden dit nuttig
Vertaal recensie in het Nederlands

Lynn
5,0 van 5 sterren loved by my son AND husband!
9 juli 2017 - Gepubliceerd op Amazon.com
Geverifieerde aankoop
Since My son loves captain underpants I decided to try this book too. Same author. He enjoys this one also. Your child must like comic book format books to enjoy this. That's how the pages are set up. These books always have my son laughing. Not to mention they get a good chuckle out of my husband too. You should hear the two of them together reading it. Would highly recommend David Pilkey books.
Meer lezen
6 mensen vonden dit nuttig
Vertaal recensie in het Nederlands
Ga naar Amazon.com om alle 379 recensies te bekijken 4,4 van 5 sterren
Terug naar boven
Over ons
Verkoop bij ons
We helpen je graag
© 1996-2020, Amazon.com, Inc. en dochterondernemingen