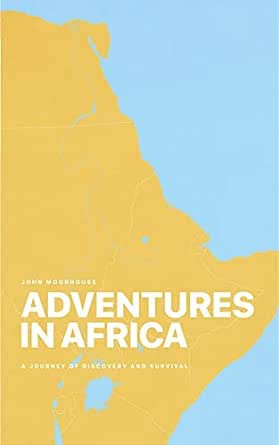 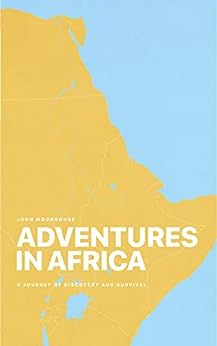 Adventures in Africa: A Journey of Discovery and Survival (English Edition) Kindle-editie

Lying on a beach near Mombasa, full of confidence from 6 months hitching through Egypt, Sudan and Kenya, John felt the urge to push himself as far outside his comfort zone as possible. One place in Africa filled any sane person with dread – eastern Zaire, now called Congo. What could be more dangerous than crossing war-torn Uganda and trying to paddle the Zaire River in a dugout canoe?
John Moorhouse, a young and naïve, recently qualified dentist sets off from Manchester in 1980 to backpack to Cape Town on a self-imposed budget of three dollars a day in a world without ATMs, mobile phones or Sat Navs.
With humour and sensitivity, he describes his many life-threatening adventures and the remarkable people he met; paying homage to their culture and beliefs and the amazing hospitality he received from the tribespeople, expatriates and missionaries who helped him on his perilous journey of self-discovery.
A year later he returned to the same beach mentally and physically exhausted, having survived renegade soldiers in war-ravaged Uganda, hepatitis in Burundi and cholera in Zaire.

E. R. M. Tarleton
5,0 van 5 sterren Could be called Africa on a shoetring.
26 november 2019 - Gepubliceerd op Amazon.com
Geverifieerde aankoop
I thoroughly enjoyed reading this book and the trials and high points of the author's journeys. The book covers his solo travels through much of Africa and is written with warmth and humour. It is an easy book to read and a lot of instances are very touching. I must admit though, that after reading this book, I think I prefer 4 star luxury demanded by my wife.
Meer lezen
Vertaal recensie in het Nederlands

Joanna J
4,0 van 5 sterren The travel memoir of a young English dentist exploring Africa in the early 80s
23 december 2019 - Gepubliceerd op Amazon.com
Adventures in Africa is the travel memoir of an English dentist, describing his eighteen month solo journey through East and Central Africa in the early 1980s. I was interested to read this when it became available through the Reedsy Discovery programme, because I’m a travel doctor and while I have done an Overland trip Africa, I haven’t been to many of the places he visits, which were seriously off the beaten track, especially 40-odd years ago. It turned out to be a stressful read for me, as he breaks every travel health rule, acquires a panoply of tropical diseases and survives some frightening experiences that would have most of my patients jumping on the first plane home.

In 1980, a few years after leaving university, John Moorhouse quit his job as a dentist and set off into the unknown with the romantic but insane idea that he is going to paddle down the Zaire (now Congo) River, inspired by a picture book given to him as a child. He describes his initial backpacking through Europe and crossing to Egypt, from whence he heads South, intending to make his way to Cape Town in a budget of US$3 a day. The book is broken up into chapters by country, and there are helpful maps to show his itinerary. Things don’t go according to plan, but he does reach the heart of Africa and meets some incredible people along the way.

It’s written in a conventional first person past style, that felt a lot like reading my old travel diaries - rather dry and heavy on minutiae of specific places and transport arrangements, including listing every individual that he meets and every meal he eats with a clinical attention to detail that probably felt important at the time. While I’m sure this was a wonderful trip down memory lane for him, I found the accounts of every single night’s sleeping arrangements, type of beer or illicit substance consumed (for a health professional, he certainly took a LOT of drugs) rather repetitive, and I would’ve preferred more descriptions of the places and details of the history, customs and politics of each country instead, but I accept that a 24 year-old was probably not so interested in these aspects at the time. Fortunately he drops the tendency to note the cost of every single expense as the book progresses as this got tedious.

What I enjoyed most were the parts which reminded me of my own travels in the 1990s - so much of which have disappeared in these days of 24-hour connectivity: the joy of finding letters at the Poste Restante, the anxiety about running out of money when it could be weeks before you can get more, the way your rolls of film and journal become your most treasured possessions. Oh and feeling like you’re best friends with someone you’ve known for a week.
Moorhouse endures a grumpy long-distance phone call with his mother who is upset because they haven’t heard from him in over four months. These days parents are calling the police when their offspring drop off Facebook for more than a day. The past is indeed a different country.

He does have some truly amazing experiences, and some horrendous ones. His nerves of steel are not matched by a stomach of iron, and he endures months of giardiasis and amoebic dysentery due to cheerfully eating as cheaply as he can. The one disease he doesn’t report getting is malaria - there are mentions of taking prophylactic tablets but it’s unclear if he kept these up. He almost loses an eye from a dog bite, but it didn’t apparently occur to him to get rabies shots. I was particularly interested in how he combats cholera with home-made rehydration solution - very standard now, but a concept barely heard of in mainstream medicine back then. I found the dedication to his daughters at the start most reassuring as otherwise I would’ve been sure he couldn’t survive so many risky endeavours.

His adventures didn’t give me any great urge to visit the Congo, or many of his other destinations, although I will admit Mauritius sounds very tempting. The book is obviously written recently but with very little commentary about what the grown-up John thinks of his past self. I note in the biography at the end that he went on to do a lot more travelling, and lived in Africa for a prolonged stint. I would’ve appreciated an epilogue from today’s perspective.
Overall this was a blow by blow account of a trip that not many would have the courage to undertake, of most interest to people who have travelled themselves, rather than a work of literature. My thanks to Reedsy for the ARC in exchange for an honest review.
Adventures in Africa is available now.