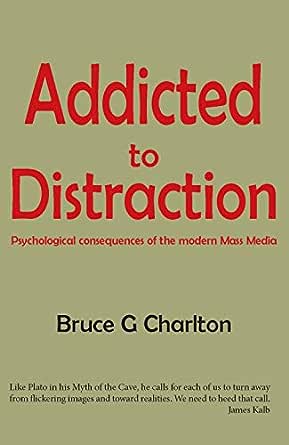 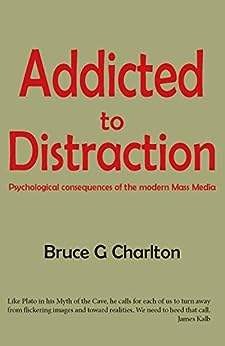 In this groundbreaking study, Bruce Charlton sheds brilliant light on fundamental features of our current situation. He develops Marshall McLuhan's insight that "the medium is the message" into a deeply illuminating account of the mass media as a self-sustaining techno-cultural system that absorbs the whole of human life into a virtual world of willfulness and unreality. Like Plato in his Myth of the Cave, he calls for each of us to turn away from flickering images and toward realities. We need to heed that call.--James Kalb: author of The Tyranny of Liberalism and Against Inclusiveness

"Addicted to Distraction by Bruce G Charlton is a brilliant, pithy, and incisive analysis and condemnation of the modern mass media and its semipurposeful agenda of permanent revolution, permanent hysteria, and permanent chaos. His comments are as cutting as the scalpel of a surgeon performing an autopsy, and his insights a bright and clear as the merciless lights in an operating theater. Can a fish drown? Can it even notice the waters in which it lives and moves? No more than can we notice the totalitarian relativism of the modern mass media. The Mass Media is a roaring, grinding attention-grabbing machine which operates with no set purpose; except the purpose to subvert, uncreate, mock and destroy. It does not matter what the media destroys. Pointless subversion is the point of the media, and the medium is the message. By all means read and understand this book ... and then go out by yourself into the calm and silent wilderness for a year."--John C Wright

For most of us the Mass Media is the focus of our lives - it provides the material which is discussed and debated, it articulates our responses and it provides the framework by which a vast potential volume of material is filtered, prioritised and interpreted.

The reality is that anything can be treated as overwhelmingly important, urgent, desperate, demanding of action now, but as easily forgotten. The medium has outgrown the message. The overall fact of this massive system has become more important than the details of its communications.

Stimulated by the horrific revelations of the Jimmy Savile affair at the BBC, with its implications of wholesale Establishment corruption and a sustained media cover-up, this book diagnoses the fundamental problem of the modern world as addiction to the distractions of the Mass Media and points to the only logical destination of its expansion: the destruction of society itself.

jimmy
2,0 van 5 sterren meh
23 februari 2019
Indeling: Kindle-editieGeverifieerde aankoop
I like the sentiment of the book, but this is too much of a rant. After the Iraq war I just tuned out -- no more Lugenpresse for me. And we should all do that.

Charlton also ignores the power of social media for good purposes. There's plenty of that, too, but I guess he's just too angry to acknowledge that.

I share the writer's postscript amazement wrt stuff like the Savile affair. There are dozens of other openly rotting, yet dressed up corpses. Whether it's jihadists radicalizing on welfare, hollywood's predatory scene, violent psychopaths who somehow always get snother chance, or career criminals who end up like folk heroes -- nobody speaks out, nobody seems to mind, nobody puts 2+2 together. The result: unnecessary suffering and many victims.
Meer lezen
Nuttig
Commentaar geven Misbruik melden
Vertaal recensie in het Nederlands
Alle 1 klantenrecensies bekijken
Klantenrecensie schrijven

J. C. Walters
5,0 van 5 sterren Someone Had to Write This Book
27 november 2015 - Gepubliceerd op Amazon.com
Geverifieerde aankoop
If you find the media's coverage of events highly disturbing but find difficulty in finding the precise words to describe the problems, then this book assists mightily in identifying and uncovering the ugliness of the modern mass media. The author reveals the unsettling trends in the mass media: the worship of evil mascots and anti-heroes; the selection of stories for political effect; the "airbrushing" of evil; the media's motivation to break down traditional society in favor of a disturbing and destabilizing new set of values; the media's search for ideas and stories that paint the right wing and the religious in an ugly light; and outright lies permeated and rammed into the minds of the masses. A strength of this concisely written book lies in the author's considerable skill in use of the English language. No fluff or cheap filling here. With an economy of words, a powerful analysis of mass media is presented to the reader.

The Titanic impact of the Mass Media's impact on society and culture is related with uncompromising logic. The author prescribes certain habits of thought and actions for those of us not wishing for our brains to turn to mush or be overly insulated from the realities of life in the 21st Century. He is making a moral stand. This is not really a political book but taps into more fundamental issues. Without trying to entertain, Charlton nonetheless holds my attention with thoughtful prose, penetrating logic, and the certainty of the relevance of the importance of the many issues raised. This book had to be written. A pleasure to read, I give this my top rating.
Meer lezen
Een iemand vond dit nuttig
Vertaal recensie in het Nederlands

C. Derick Varn
1,0 van 5 sterren Basically a rant
14 januari 2020 - Gepubliceerd op Amazon.com
Indeling: Kindle-editieGeverifieerde aankoop
Charlton presents a list of assertions that mass media is a leaderless and demonic form of leftism aimed to undermine conservative Christians. While Charlton does hit on some real problems with modern media landscape, he ignores the commercial functions of media and that it does have leaders: funders. The only real examples are the Jimmy Sevile affair, which was particularly vile.
Meer lezen
Vertaal recensie in het Nederlands

Dave
5,0 van 5 sterren aha!
12 juli 2014 - Gepubliceerd op Amazon.com
Indeling: Kindle-editieGeverifieerde aankoop
So that explains the group-think and banality of TV. I knew the media had some tie-in to social destruction, but this explains it.
Meer lezen
2 mensen vonden dit nuttig
Vertaal recensie in het Nederlands

Joseph Rosario
3,0 van 5 sterren Great premise & conclusion dissipated by bad prose
11 november 2014 - Gepubliceerd op Amazon.com
Indeling: Kindle-editieGeverifieerde aankoop
Concepts are solid. Elucidation and writing style not so much. I really wish this book was better written. Maybe it's the Kindle formatting, but just seems that the paragraph and sentence structure hit the senses a little too much like a stream of consciousness rant, when it obviously is not. Having a little more of a flowing and unfolding narrative prose-style, ie. Building on foundational premises and then structuring narrative from that to come to conclusions a little more wholistically would have really helped make this work more accessible and not so easily confused as yet another scholarly sounding breakdown of a bumper sticker rant.

Another bit to avoid I think is the unabashed card-showing by ham handedly using terms like "leftist", "new left", etc. without doing a bit more detailed (just a bit) treatment of these buzzwords.