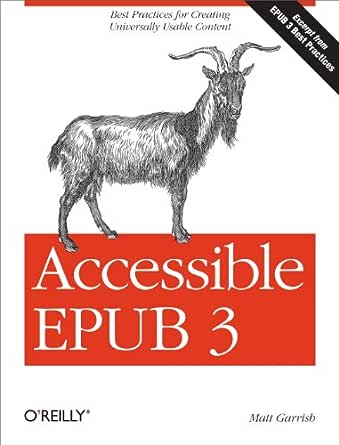 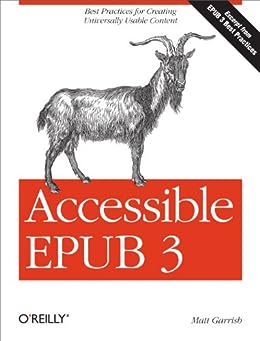 Although the digital revolution has made content available to more people than print books ever could, ebooks are still only as accessible as the foundation they’re built on—and all too often the foundation is weak. But that’s changing. With the introduction of EPUB 3, publishers now have the means to create a single rich data source for audiences of all reading abilities.

Through practical tips and examples, Accessible EPUB 3 takes you inside the EPUB 3 format and explores how you can enrich and enhance content for all readers. Author Matt Garrish demystifies the process of making content easier to access, demonstrating how accessible practices are intertwined with standard content best practices.

Among many techniques, this guide will teach you how to:

Garrish tells us at the end of Accessible EPUB3 that is is, in fact, a teaser for the full-length EPUB3 Best Practices. That's the wrong place to put that information; it should have been in the beginning, and masking it until the end revised my rating of this book down by a non-trivial amount. Since (presumably) you are reading this review, you won't have to worry about that, so take that into account as we go along. I was kind of amused that O'Reilly Media decided to release this and HTML5 for Publishers in the same whack of free material, since the two books are basically opposites; in fact, one of the big features the latter highlights, canvas, is specifically targeted in Accessible EPUB3. “Although a potentially interesting element to use in ebooks, at this time the canvas element remains largely a black hole to assistive technologies.” Reading the two of them in tandem is probably a good idea, assuming you care about accessibility issues (and if you're publishing ebooks, you probably should). Oh, that reminds me: take note of the use of the word Accessible in the title. When I grabbed this, I was thinking of it as “we're going to take this ridiculously complex specification and lay it out for you in layman's terms”, when in fact it is used in the Microsoft Control Panel sense of “here's a high-level overview of making your ebooks readable by folks who will not be approaching them from the normal way (e.g., the blind)”. And a high-level overview it is, though unlike HTML5 for Publishers, there's enough meat on Accessible EPUB3's bones to make it worth your while. You will, once again, find yourself delving into more detailed work to make a full go of it (and preferably a different one than the full-length of this, since anyone who uses the phrase “best practices” in a non-ironic sense does not deserve one penny of your money), but this is at least a halfway decent starting point. Just be aware that it is not the full monty. **

Suzanne Fyhrie Parrott
3,0 van 5 sterren Food for thought, but needs more code examples
7 juni 2012 - Gepubliceerd op Amazon.com
Geverifieerde aankoop
This book reminded me that there are more readers in the world than sighted -- and my failure to keep ALL readers in mind when I format was sobering. With that said, the book could have offered more examples on "how" to make your books more accessible - codes and their uses. I would imagine in future updates that this may be addressed.

Tomasz Miernik
3,0 van 5 sterren Average interest
23 april 2012 - Gepubliceerd op Amazon.com
Geverifieerde aankoop
The book is a little interesting, about the weakly has been exhausted. As it is for free, I can say that is worthwhile.
Meer lezen
Een iemand vond dit nuttig
Vertaal recensie in het Nederlands

dpeach
4,0 van 5 sterren Title Confusing but Good Content
18 april 2012 - Gepubliceerd op Amazon.com
I read the title, Accessible EPUB 3, to mean that the author would show me in an easy to understand (accessible) way to create and format books for the EPUB platform. I was completely wrong on who the target audience was. This is not a book for people who are new to EPUB (like myself) who are wanting to learn about ebook formatting. The EPUB spec is not even detailed in the book. This book is written with the assumption that the reader is already familiar with and understands EPUB.

After better understanding what the book was about, I enjoyed the book from a thought experiment point of view. There were examples on how to implement the concepts the author was proposing. However, as someone who doesn't understand EPUB programming, this information was merely theoretical and thought provoking for me. There are even points in the book where the author, Matt Garrish, admits that there may be a better way to be more accessible in the future. His point is that he wants readers to think about people with various abilities who will be reading the books we create using EPUB 3. The questions we should ask for our readers of different abilities are: What is it they need? and, How can you go about programming your ebook to fit those needs?
Meer lezen
12 mensen vonden dit nuttig
Vertaal recensie in het Nederlands
Ga naar Amazon.com om alle 4 recensies te bekijken 2,9 van 5 sterren
Terug naar boven
Over ons
Verkoop bij ons
We helpen je graag
© 1996-2020, Amazon.com, Inc. en dochterondernemingen