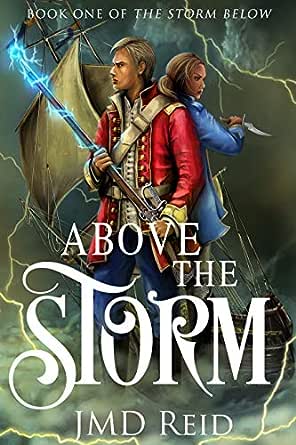 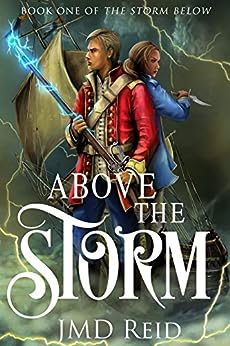 Death rides in the Cyclones!

The demonic Stormriders are the greatest threat...

...to the people whose lives they've ruined. Do the riders have a weakness?

Ary knows their danger first-hand. As a child, they broke his family. Now he has a choice to make. Can he find a way to defeat them when so many before him have failed?

When the storm clouds come, what will Ary do?

You'll be enthralled by this epic fantasy story set in the skies above the Storm because the characters will keep you hooked.

Bending the Bookshelf
4,0 van 5 sterren Fantastic mythology, lovely world building, and characters we care about
24 oktober 2018 - Gepubliceerd op Amazon.com
The fantasy genre has largely shifted away from the wondrous, magical fields of epic fantasy, and into the darker, more human dungeons of grimdark. It is a shift that has alienated me to some extent, since I have always looked to the genre for a joyous escape, which is why Above the Storm caught my attention with the opening scenes.

JMD Reid launches into the story with a temple above the clouds, an aging avian woman (complete with beak and feathers), her reptilian protector (warm and caring despite his cold eyes), and a shocking maelstrom rising from those clouds, with warriors of a humanoid race assumed long-dead riding to battle. The whole scene is as unsettling as it is wondrous, and it demands you keep reading. That is how I like my fantasy to begin!

There is a coming-of-age element to the story, along with a strong romantic element, marked by those conflicting, confusing emotions of young love. In the wrong hands, those elements can drag a story down and leave more mature readers rolling their eyes, but Reid clearly has a grasp on the characters and their relationships, allowing him to draw us in and engage us emotionally as well as intellectually.

Surrounding all of that, however, is a violent, energetic, action-packed tale of magical and military conflict that offers a lot in the way of wonder and amazement. We have pirates and soldiers, air ships and magical steeds, and a mix weapons and magic that keeps the story fresh and original. I tend to gravitate more towards swords-and-sorcery quest fantasy than muskets-and-magic military fantasy, but the way this plays out, and the way Reid keeps the focus on the characters, made it work for me. It is wonderfully paced, with a strong sense of tension throughout, and numerous twists that feel like a natural extension of the story, as opposed to a deliberate attempt to shock the reader.

The mythology here is fantastic, with a lovely amount of world-building that really brings the story to life. More importantly, though, we care about what happens to the people and their world, and that makes the next story of The Storm Below a must-read.
Meer lezen
3 mensen vonden dit nuttig
Vertaal recensie in het Nederlands

Andy.P
4,0 van 5 sterren A hell of a start to a new series!
22 oktober 2018 - Gepubliceerd op Amazon.com
From the first chapter, I found myself drawn into this story. The tale of a young man touched by a storm and cursed by death. The tale of a young woman struggling to find herself and come to terms with her place in the world. Together, they will rise Above the Storm to (doubtless) one day save the world.

The setting and worldbuilding details of this story were absolutely awesome. From flying fish (take that Sharknado!) to people riding ostriches (Swiss Family Robinson FTW) to marines wielding guns that channel their lightning magic to pegasi to floating ships, I found myself turning the pages quickly to find out what new and creative twist the author would give their world.

Is the book perfect? I wasn't a huge fan of the "will she/won't she" and the constant self-recrimination of her "hot blood"--felt a bit too close to the ethnic slur "jungle fever". The lack of trust, jealousy, and other relationship-focused emotions of the book were far more prominent than the other more personal, internal ones, so I felt it detracted a little from the more epic story. Almost felt like a romance story that happened to be set in a fantasy world rather than a fantasy story with a bit of romance.

But overall, I LOVED it. It sucked me right in and kept me reading until the end, when I found myself frantically turning pages to find out when the next one was coming out. Great story, great intro to a kick-ass world!
Meer lezen
2 mensen vonden dit nuttig
Vertaal recensie in het Nederlands

Timothy D. Hemlin
5,0 van 5 sterren Of Military and Myth: JMD Reid's Unique World
23 oktober 2018 - Gepubliceerd op Amazon.com
JMD Reid's Above the Storm, Book One in The Storm Below, has all the makings of a great series. The fantastical world is rich and believable, even though sharks roam the sky and cyclones appear to have a mind of their own. It's a marvelous blend of myth, ancient wars and the challenges of everyday living. The characters are well defined and interesting, the writing strong with a sharp eye for detail, and the plot opens like a lotus blossom on a muddy pond, or rather above the roiling storm below.

The storm below defines the lives of those living in the lands above. After a curious prologue that describes a distant past that still has its talons in the present, we witness a childhood tragedy that shapes the lives of the three main characters, Ary, Chaylene and Vel. The complexity of their relationships drives the story, taking them from their quiet village to a coming of age ceremony and into young adulthood as members of the military. Reid doesn't shy from writing about the difficulty of romantic love, the fickleness of friendship and the shock of betrayal. The thoughts and emotions his characters express are as real as yours and mine, and beneath it all are dark secrets worming toward the light of day. A wide array of supporting characters includes strange bird and lizard humanoid species, pirates and soldiers with names like Guts, Zori and Ailsuimnae. I have to admit I liked the Sergeant-Major even if Ary wanted to punch him in the face. (There was a character outside of those two I really wanted to punch in the face!)

However, Reid's real strength resides in building tension and presenting action scenes. The fight sequences, whether individual or a full our military assault, are fantastic. More than once I couldn't put the story down, particularly during Ary's fever and the appearances of the cyclones. To say anymore would give too much away.

Theisseg-damn, I thought when I finished. How long do I have to wait for the sequel? Get writing, Mr. Reid.
Meer lezen
Een iemand vond dit nuttig
Vertaal recensie in het Nederlands

Martin Septim
5,0 van 5 sterren A creative fantasy world
24 oktober 2018 - Gepubliceerd op Amazon.com
As a fan of James Reid's work, I was pleased to read the first installment of his long-anticipated Above the Storm series. The world-building is unforgettable, with a floating world above an endless storm, a corrupt church, and races of Humans and other creatures with their own histories. The writer did a great job of creating a unique universe into which we could explore the story of Ary, Chaylene, Vel, and other characters.
Meer lezen
2 mensen vonden dit nuttig
Vertaal recensie in het Nederlands
Ga naar Amazon.com om alle 5 recensies te bekijken 4,6 van 5 sterren
Terug naar boven
Over ons
Verkoop bij ons
We helpen je graag
© 1996-2020, Amazon.com, Inc. en dochterondernemingen